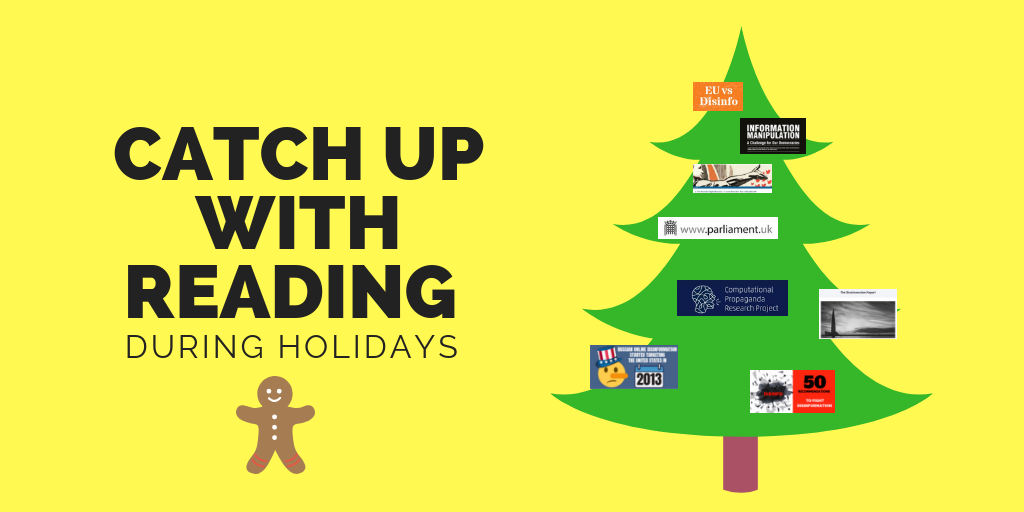 As disinformation never sleeps – and there might be some free time during the holiday season – EUvsDisinfo shares the creme de la creme of reports that have caught our eyes this year.

1. Information Manipulation A Challenge for Our Democracies is a French study based on about 100 interviews and focuses on information manipulation orchestrated by states with purpose to weaken democratic debate in other states. In addition to studding the human nature, the report also highlights societal characteristics that manipulators can work with – presence of minorities, internal divisions and vulnerable media. Also the used narratives, data leaks and falsification of documents are analysed. Lastly, 50 recommendations are made to counter the issue.

2. The IRA and Political Polarization in the United States by Oxford’s Computational Propaganda Research Project tells a stunning story of Russia’s Internet Research Agency or IRA that researched itself into misinforming and polarizing voters in the US especially in 2016. The amplitude of IRA’s actions will raise a few eyebrows, as it actually started back in 2013 in Twitter and quickly spread to other platforms resulting in over 30 million users sharing IRA’s posts in social media. The aim of the IRA was to drive voters to boycott elections, fuel distrust in US institutions, encourage extreme right-wing voters and spread junk political news and misinformation. Oh, and all of this did not end with the 2016 elections!

3. A View from the Digital Trenches – Lessons from Year One of Hamilton 68 is worth reading as it observes Russia’s efforts not as single and separated events but as a continuous, relentless assault. The findings are compelling: Russia’s election-specific efforts are secondary to promoting Russia’s geopolitical interests, exporting its illiberal worldview, and weakening the US by exacerbating existing social and political divisions. The report also highlights the tactics, techniques, and narratives used to influence Americans online.

4. Disinformation and ‘fake news’: Interim Report shows the British view on disinformation and poses more than 50 ideas to the Government to counter it. The paper argues that the targeting of hyper-partisan views, which play to the fears and the prejudices of people to alter their voting plans is even more invasive than obviously false information. In addition to the information sphere, the document also describes how a donation to the Leave campaign might have been connected to Russia.

5. Challenging Truth and Trust: A Global Inventory of Organized Social Media Manipulation is also from Oxford’s Computational Propaganda Research Project and gives a general overview about how and where social media manipulation campaigns have been used worldwide. It’s also worth to read as social media automation, online commentary teams, paid advertisements and search engine optimization have a new competitor – disinformation campaigns in chat applications like WhatsApp, Telegram and WeChat.

A totally free extra for this list, the Authoritarian Interference Tracker exposes Russian government’s foreign interference activities in more than 40 countries from 2000 to the present day. The tool covers a wide array of topics from cyberattacks, political and social subversion, strategic economic coercion, malign finance to information operations. It’s totally worth the look as the examples are pristine from planting fake protester to stage a fascist protest to showing how some news sites are secretly linked to Kremlin’s propaganda network.

Oh, and to all the bookworms out there – Russian propaganda is by no means a new thing.Deception, Disinformation, and Strategic Communications: How One Interagency Group Made a Major Difference describes how Russian desinformation was managed in the US back in the 1980s.