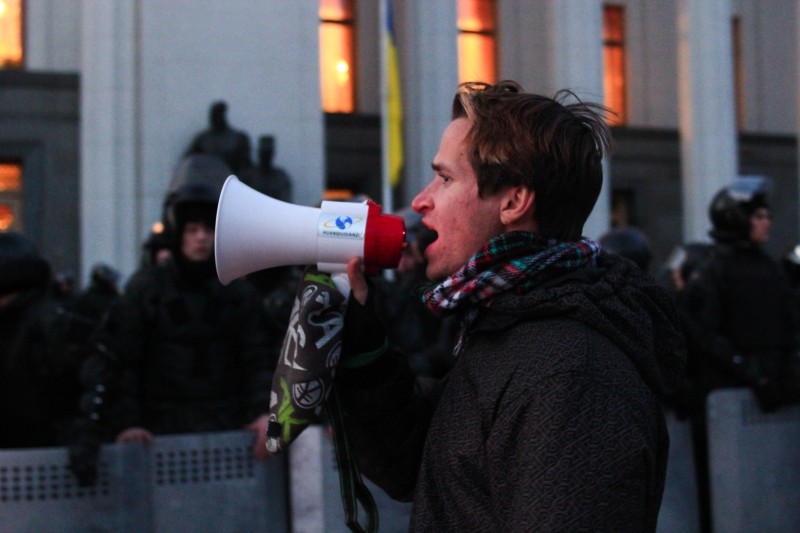 Although many European countries had a rough ride in 2014, no country in Europe can claim to have had a more challenging year than Ukraine. What began as a series of peaceful protests against a government decision that displeased many Ukrainians turned into an international armed conflict with Russia, formerly Ukraine’s closest ally, that continues to affect Europe and the rest of the world.

Images and posts found on the Internet about Ukraine and the Crimean conflict have left millions around the world in awe. Global Voices takes a look at how the year-long conflict has changed Internet use in Ukraine.

1. #EuroMaidan
#EuroMaidan (“European Square”) was a popular uprising of citizens against the Yanukovych regime. It became the central event of 2013 in Ukraine both online and offline, lasting well into 2014. Beginning as a series of peaceful pro-European protests against the federal government’s sudden decision to turn away from an Association Agreement with the European Union and turn, instead, toward Russia, EuroMaidan gradually escalated into a full-fledged public uprising that ended with the tragic shooting of protesters in Kyiv, the subsequent flight of Yanukovych, snap presidential and parliamentary elections, and a complete reorientation of Ukraine’s geopolitcal course towards the West.

While the role of social media in Ukraine’s EuroMaidan revolution should not be overestimated, Internet-based technology and social networks undeniably had a large impact. The intial protests were sparked in large part by a Facebook post by a well-known journalist. In EuroMaidan’s early stages, protesters used Facebook to organize and Twitter and YouTube to communicate among themselves, and with the outside world. As a mass movement that’s still underway, EuroMaidan has a potent online dimension with activists sharing information, discussing reforms, and still organizing to exert pressure on Ukraine’s new government. After the Yanukovych regime collapsed in late February 2014, Ukrainians continued live-streaming key meetings of activists, as well as other public discussions about the future of Ukraine.

Today, the independent and largely crowdfunded “online television”project Hromadske.TV, popularized by its relentless coverage of EuroMaidan, has firmly established itself as one of Ukraine’s premier media outlets. The country’s primary state-owned national TV channel has since carried Hromadske.TV more than once.

3. A new government on Facebook
By the spring of 2014, in the aftermath of the violence that took place before Yanukovych’s fall, Ukrainians’ trust in public institutions—particularly the police—had plummeted dramatically. In this environment, Facebook became one of the key platforms for discussing ongoing political events in Ukraine. Indeed, several key figures of the interim government took to the website to communicate directly with the public.

Most notably, Ukraine’s new Minister of Interior, Arsen Avakov, has famously posted daily reports about his activities on Facebook. In the uneasy period following Russia’s annexation of Crimea and the ongoing fighting in the Donbas, where Russia-backed militants battle Ukrainian troops, Avakov’s regular blog posts have enjoyed some success, satisfying the public’s demand for greater transparency. (Some commenters, of course, do wonder if a government minister should spend so much time on the Internet.) 4. Russia-Ukraine online “information warfare”
It’s become increasingly difficult to find reliable information about Eastern Ukraine, after Russian’s annexation of Crimea and its role supporting the militants now fighting in Donetsk and Luhansk. Often, social media reports from the conflict areas have been the only available firsthand accounts of breaking news stories.

In fact, Internet users were the first to note reports of Russian soldiers posting “selfies” and geotagging themselves in Ukraine, while the Kremlin actively denies it’s deployed any troops in Ukraine. Such incidents have prompted the creation of special projects for crowdsourcing citizen reports, in English, Ukrainian, and Russian, about the movement of militia and Russian military forces in Ukraine.

Social media investigations have also focused on the tragic downing of the MH17 airliner over the separatist-controlled territory of Ukraine, providing important evidence of what appears to be the Kremlin’s hand in the attack, prompting a rather clumsy denial from Russia’s state-controlled media.

Observers have also noted the rise of organized misinformation campaigns by trained and Kremlin-paid Internet “trolls” tasked with discrediting factual data, while at the same time spreading disinformation to legitimize Russia’s actions in Crimea and Eastern Ukraine. In reaction, independent fact-checking initiatives have launched to reveal false media reports about Ukraine and counter Russian propaganda both in traditional media and on social networks.

5. Soldiers on social media
In the spring of 2014, Russia-backed militant groups in Donetsk and Lugansk seized control of large parts of these regions, leading to an armed conflict with Ukraine’s post-Maidan government.

Given the extreme weakness of the Ukrainian army in comparison to Russian forces, the possibility of separatist tensions spreading to other regions, as well as the threat of a full-scale Russian military invasion, led to the creation of volunteer battalions comprised of volunteer troops and the government’s regular soldiers. Maidan self-defense troops and the government’s regular soldiers are fighting in the first war of Ukraine’s post-Soviet existence. Like their separatist counterparts, Ukraine’s combatants have eagerly publicized their experiences via Internet social media.

Some report the bleak conditions of war, often with a grain of humor, while others update their followers about the latest developments at the front lines, typically discussing the needs of the army. Such social media reports have been instrumental in drawing public’s attention to the desperate conditions in the military, creating public pressure on the government to provide more support to the army.

For example, during the battle of Ilovaisk—the worst fighting of the entire conflict, so far—volunteer battalion members and their commanders turned to social media, circumventing the government in Kyiv and even contradicting several of its public claims about supposedly having recovered the town. The combatants reported the battle’s real casualty figures and demanded reinforcements. This act ultimately prompted the government to open a criminal investigation into the battle’s management, which led to the resignation of interim Defense Minister Heletey.

6. Crowdfunding the military
When Russia annexed Crimea, Ukrainians were suddenly made aware of their nation’s military disadvantage. Since then, Ukraine’s armed forces—led by the Defense Ministry itself—have repeatedly solicited donations from the public, to fund the war effort in Donetsk and Luhansk.

The process has given rise to several prominent volunteer initiatives, with President Poroshenko awarding the founders of these organizations; he’s even invited key volunteers to become his advisors and participate in reforming Ukraine’s Ministry of Defense.

7. Internet technology for discussing reforms
In 2014, social media and social networks have also hosted an ongoing discussion about reforming Ukrainian politics and society. After the last parliamentary elections and the formation of the new government in late 2014, many new MPs and government officials have turned to Facebook and other social media platforms to solicit proposals from citizens, search for new personnel, and report their activities. In December, activists even launched a new Internet platform for public discussion of draft legislation in the parliament.