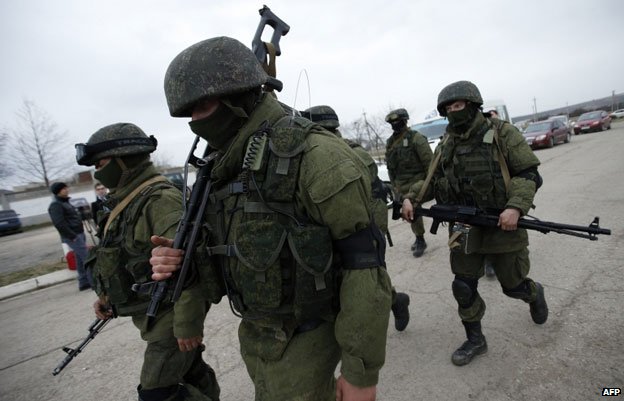 Russia’s annexation of Crimea last year caught almost everyone off guard. The Russian military disguised its actions, and denied them – but those “little green men” who popped up in the Black Sea peninsula were a textbook case of the Russian practice of military deception – or maskirovka.

At a cadet school in the southern suburbs of Moscow, Maj Gen Alexander Vladimirov heaves two enormous red volumes off his bookcase and slams them down on the table. “My Theory and Science of Warfare,” he says, beaming. “It’s three times longer than Leo Tolstoy’s War and Peace!”

Vladimirov, vice-president of Russia’s Collegium of Military Experts, is an authority on maskirovka – the hallmark of Russian warfare and a word which translates as “something masked”.

“As soon as man was born, he began to fight,” he says. “When he began hunting, he had to paint himself different colours to avoid being eaten by a tiger. From that point on maskirovka was a part of his life. All human history can be portrayed as the history of deception.”

Vladimirov quotes liberally from the Roman general Frontinus and the ancient Chinese philosopher Sun Tzu who described war as an eternal path of cunning.

But it’s Russia, he tells me, with unmistakable pride, that has over the centuries really honed these techniques to perfection.

One of the most famous examples is the Battle of Kulikovo Field in 1380, when the young Muscovite, Prince Dmitry Donskoy, and 50,000 Russian warriors fought against 150,000 Tatar-Mongolian soldiers led by Khan Mamai. It was the first time the Slavs were fighting as a united army – Russia against the Golden Horde.

“The fighting was very tough, but we eventually triumphed thanks to one regiment hiding in the forest,” says Vladimirov. “They attacked ferociously and unexpectedly and the ambushed Tatars ran away.”

But that was just a start. Vladimirov reels off some more recent legendary battles in which Russia outfoxed its enemies, with flair and cunning.

There was the Jassy-Kishinev operation of August 1944, which featured dozens of dummy tanks as well as whole Red Army divisions sent in false directions to throw the Germans off the scent.

And that came just after Operation Bagration in Belorussia had dealt Hitler’s troops a devastating blow.

“It was clear the military skill of Soviet leaders outclassed the Germans,” Vladimirov says. “Our generals decided not to go the easy way along the road but through the swamps! That way they attacked the rear of the German forces. That’s mastery for you! All throughout Bagration, there were colossal examples of maskirovka involving thousands of tanks and troops. After that the war was practically over.”

Out of 117 divisions and six brigades, half were destroyed and the rest suffered 50% losses – half a million Germans died there.

Surprise is a key ingredient in maskirovka and the clandestine forces which occupied Crimea last February certainly delivered that.

Pyotr Shelomovskiy, a Russian photojournalist, was there as they arrived. He had rushed down to Crimea expecting tensions to arise after Ukraine’s Russian-backed president, Viktor Yanukovych, fled the country – and on 24 February he watched local pro-Russian activists building a small barricade on the square outside parliament.

“They started brewing tea and distributing drinks. Some journalists, myself included, were allowed to take pictures,” says Shelomovskiy, “and that was it for the night.”

Or so he thought. But in the small hours, unmarked military trucks drove up filled with heavily armed men.

“They ordered those demonstrators to lie face down on the ground – until they realised they were on the same side,” says Shelomovskiy. Then they made them carry ammunition into the parliament.

He was told this story by the activists the next morning. “They didn’t really understand themselves what was going on,” he says.

The troops which had arrived in the dark, as if by magic, with no insignia on their olive-coloured uniforms, were soon nicknamed “little green men”.

“We know now these guys were Russian special forces,” says Shelomovskiy. “But no-one said so at the time.”

Denial is another vital component in maskirovka. At a press conference a few days later Vladimir Putin coolly batted away awkward questions about where the troops came from.

“There are many military uniforms. Go into any shop and you can find one,” he said.

But were they Russian soldiers? Poker-faced, the president said the men were local self-defence units.

Five weeks later, once the annexation had been rubber-stamped by the Parliament in Moscow, Putin admitted Russian troops had been deployed in Crimea after all. But the lie had served its purpose. Maskirovka is used to wrong-foot your enemies, to keep them guessing.

Maj Gen Gordon ‘Skip’ Davis, in charge of operations and intelligence at Nato’s military HQ in Belgium, admits it took him and his colleagues some time to figure out the “size and the scale” of the troop reinforcement which was “continuously denied by the Russians”.

But if Nato was taken by surprise, the historian and journalist Anne Applebaum was not.

“I knew immediately what it was because it reminded me of 1945. It looked so familiar,” she says.

“With Crimea I got a bizarre sense of deja vu, because bringing in soldiers who weren’t really soldiers – that was what the NKVD did in Poland after the war. They also created fake political entities which nobody had seen before, with fake ideologies already attached to them… It’s a game of smoke and mirrors.”

After Crimea came the war in eastern Ukraine. Officially there are no Russian troops or little green men fighting there either – only patriotic volunteers who have gone to the region on holiday.

But there is growing evidence of Moscow’s intervention in the separatist conflict including a mounting toll of Russian soldiers killed in action.

In August Russian TV showed footage of water and baby food being loaded on to lorries heading for Ukraine’s war zone. The Russian government called this humanitarian aid but many were more than a little suspicious. Nato already had plenty of intelligence about Russian air defence and artillery forces moving into Ukraine.

Maj Gen Davis calls the first convoy “a wonderful example of maskirovka” because it created something of a media storm. TV crews breathlessly followed the convoy, trying to find out what was really inside the green army trucks which had been hastily repainted white. Was this a classic Trojan horse operation to smuggle weapons to rebel militias? And would the Ukrainian authorities allow the convoy in?

“All the while at other border crossing points controlled by the Russians – not by the Ukrainians – equipment, personnel and troops were passing into Eastern Ukraine,” says Davis. He sees the convoy as a clever “diversion or distraction”.

The fog of war isn’t something which just happens – it’s something which can be manufactured. In this case the Western media were bamboozled, but the compliant Russian media has also worked hard to generate fog.

Ukrainian novelist Andrei Kurkov says he is constantly amazed by what he calls “the fantasy and imagination of Russian journalists”. One of the most lurid stories broadcast on a Moscow TV channel claimed that a three-year-old boy in Sloviansk – a town in eastern Ukraine with a mostly Russian-speaking population – was crucified… for speaking Russian.

The TV report is still online. A blonde woman, her voice choked with emotion, tells a serious-looking Russian news reporter that the three-year-old child was nailed to a wooden notice board in front of his mother and died in agony. The mother she alleges, was then tied to a tank and dragged through the streets until she died. She adds that she is risking her life by talking but wants to protect children against Ukrainian soldiers who behave like beasts and fascists.

“The lady claimed she’d witnessed this horrible story in Sloviansk,” says Kurkov. “But then she mentioned the name of the square where it happened and this square doesn’t exist in Sloviansk. There’s no such place.”

As Kurkov says, the story doesn’t stand up. It emerged that the woman eyewitness had a history of filing false police reports and her own parents said they thought she’d given the interview for money.

The elements of maskirovka 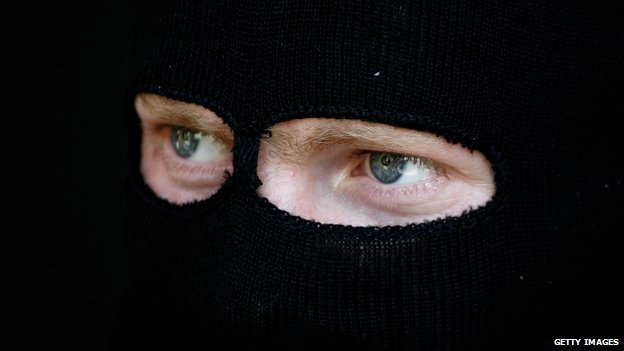 TV and the digital world are awash with similar reports. A group of Kiev journalism students who set up a website to expose fake stories say some approaches are more sophisticated than this, mixing truth and falsehood to produce a report that appears credible. But even an incredible story may serve to confuse, and create uncertainty.

Peter Pomerantsev, who recently spent several years working on documentaries and reality shows for Russian TV, argues that Russian state media are not just distorting truth in Ukraine, they go much further, promoting a seductive nihilism.

“The Russian strategy, both at home and abroad, is to say there is no such thing as truth,” he says.

“It’s a sort of cynicism that actually resonates very powerfully in the West nowadays with this lack of self-confidence after the Iraq War, after the financial crash – and that’s what the Russians are hoping for, just to take that cynicism and then use that in a military environment.”

Of course, every country uses strategies of deception. Churchill famously said: “In wartime, truth is so precious she should always be accompanied by a bodyguard of lies.” The Americans call such tactics CC&D – concealment, camouflage and deception.

So what sets Russia apart? Maj Gen Skip Davis argues Western forces are sometimes economical with the truth but says they don’t tell outright lies: “We are talking about denial of information – in other words, not confirming facts – versus blatantly denying. Saying, ‘No that’s not us invading, that’s not our forces there, that’s someone else’s.'”

But what about the false information that propelled Britain and the US into war with Iraq? Few would now deny that the facts on WMD were massaged in a maskirovka-type way. The word Davis keeps coming back to is “mindset”. He insists maskirovka has become a modus operandi for Russia itself.

This perception is nothing new for Russia’s neighbours. A decade ago Andrei Kurkov predicted recent events in Ukraine in his book, The President’s Last Love. He writes in Russian and most of his books are on sale there but this one was stopped at the border.

“Putin is one of the main characters,” he says. “In this book he promises the Ukrainian president that he will annex Crimea and cut the gas supply and lots of other things that later became reality – this is the reason why the book is banned.”

Isn’t it uncanny that he managed such accurate predictions?

“I don’t think it was difficult – somehow when you live in a not very logical world, when the logic of absurdity prevails and the players don’t evolve – it’s actually quite simple.”