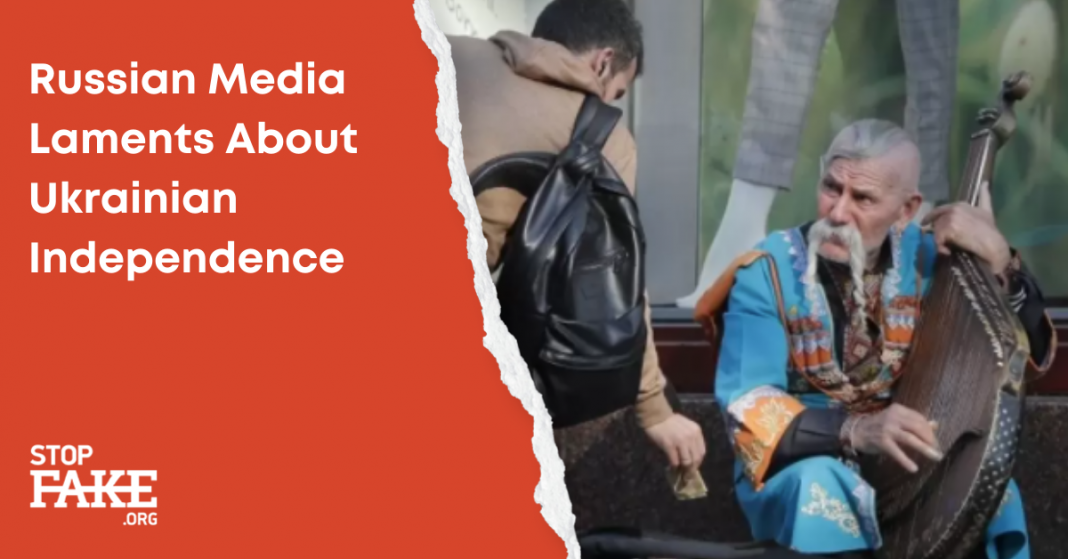 Ukraine’s August 24 celebration of the 30th anniversary of renewed independence did not pass unnoticed by Russian media. Pro-Kremlin publications used the historic date to explain to their audience how they believe life really is for Ukraine without the USSR (read without Russia).

The 30th anniversary evoked a stronger than usual wave of Soviet nostalgia in Russian media. Many publications, such as Komsomolskaya Pravda featured the Kremlin’s well-worn narrative about how the USSR actually created Ukraine and made the republic better and stronger. In an article entitled USSR made Ukraine more powerful than Germany. And now it’s the poorest country in Europe the newspaper claims that having possibly the strongest start-up capital of all the Soviet republics, Ukraine today is at the end of the line in terms of wealth, it has already been overtaken by not only Russia but the Baltic States, Belarus and Kazakhstan.

No matter what Komsomolskaya Pravda alleges about Ukraine’s overwhelming start-up economic potential when the Soviet Union disintegrated, the reality was a far cry from such claims. According to World Bank data, in 1990 Russia’s GDP was more than six times higher than that of Ukraine (Russia 516,814 billion, Ukraine 81,457 billion). Furthermore, there is no data for many other former Soviet republics, so it is impossible to make an objective comparison. In analyzing Ukraine’s current economy, Russian media also conveniently ignore the 2014 annexation of Crimea and the war in Donbas, both Russian created conflicts which have taken a toll on Ukraine’s economy.

Not 30 years of independence but 30 years without the USSR, hails the headline of a Gazeta.ru story which acknowledges that Ukraine has achieved independence, but questions the country’s sovereignty. The publication also questions Ukrainian President Volodymyr Zelensky’s knowledge of history. During the Independence Day celebrations Zelensky introduced a new national holiday, the Day of Ukrainian Statehood to be celebrated on July 28.  The starting point of that statehood is the year of the founding of Kyiv, the capital of Ukraine, Zelensky said. According to Gazeta.ru, historians have not determined when exactly Kyiv was founded. But in fact, they have and 482 is considered to be the official founding date of the Ukrainian capital. Constantly questioning Ukrainian statehood, pro-Kremlin media also conveniently overlook another important period in the formation of Ukrainian nationhood, the Ukrainian National Republic, after which the path of statehood was interrupted by decades of Soviet occupation.

Day of Dependence and US Occupation

Other Russian media simply repeated a favorite Kremlin mantra, that Ukraine is not independent but is in fact remotely controlled by the US. Citing anonymous Telegram social media accounts the site Regnum.ru declared that the day should be celebrated as US occupation day. “Ukraine is a textbook example of a failed state” Regnum gleefully declared.

Ukrainians have nothing to celebrate on Independence Day, after all in recent years it has become a colony of the West” Life.ru announced, citing a former Ukrainian parliamentarian who fled to Moscow after the Maydan Revolution. Another “expert” cited by Life.ru proclaimed that Ukraine would soon fall apart as the only things holding the country together are “the police, its currency and the army”.

Ukraine is on the path of statehood collapse because of its “bloody civil war, hailed RT, conveniently ignoring the presence of Russian tanks and troops in Donbas and the war that Russia started.

Russian analysts and experts opine in unison how Ukraine is becoming “a raw materials appendage that no one needs, a country that is unable to renew its economic potential”.

Listing all the failures that Ukraine the “western colony” has encountered, Russian experts conclude that the country could save itself if it returned to closer economic ties with Rusia. But such prospects are unlikely to happen as Ukraine is engulfed in Russophobia, therefore, Ukraine is on the road to collapse, RT concludes.