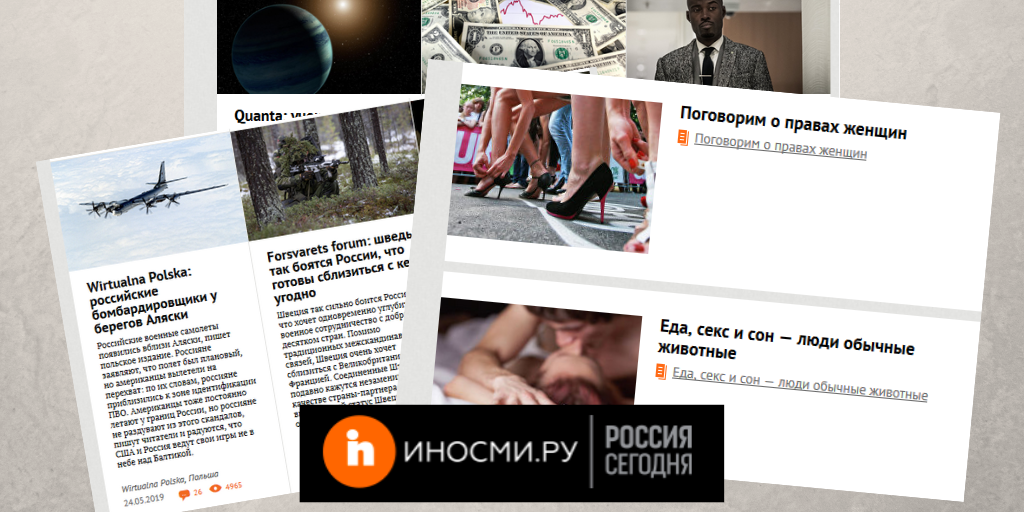 Inosmi.ru is the Russian state media holding Rossiya Segodnya’s service for translating media content to Russian. It’s part of the same media conglomerate as Sputnik, RIA Novosti and a few other disinformation outlets, managed by Dmitriy Kiselyov, the Überpropagandist of the Kremlin. The scope of Inosmi is impressive: media outlets from Australia to Zimbabwe, languages from Azerbaijani to Norwegian are translated to Russian. Neither language barriers, nor paywalls stop the translators from Inosmi.ru. EU vs Disinfo wrote about Inosmi in 2016, after a study from Ghent University.

In theory, the concept of Inosmi.ru could be a good idea. It offers a Russian reader first hand insights in International Media, and not only from the big media outlets like The Washington Post or the major News Agencies. Here – all media are equal. Stories from Washington Post are translated a couple of times a week, just as Le Monde, El Pais or Neue Zürcher Zeitung, side by side with Alaska Public Media, Diario Cordoba and Brussels Express. Here Chinese media are published, Nigerian, Mexican. The professional translators of Inosmi.ru make news in Farsi, Hausa, Japanese or Swedish available for a Russian speaking public. The inosmi.ru could function as a window to a larger world. But the focus of the site is entirely Russian. The tag-line of the site is “How Foreigners Picture Russia. We translate. You decide.”

What could be a service for presenting news from a world, wider than the scope of the dominating news bureaus, is eventually only just an attempt to get an answer to the self-conscious question “what are they saying about us?”

And with blatant disregard for copyright, one might add. Articles are published without the consent of the copyright owners. Stolen, to put it simply. Pictures, however, are always replaced with stock photos or pictures from Rossiya Segodnya’s archives and photo banks. Pictures can be easily spotted, and Rossiya Segodnya would likely be unpleasantly surprised, receiving invoices from photographers from all over the world. Translations are less easy to spot. And here we are: a Russian State Owned organisation has been systematically stealing content from journalists for years and years.

The material is thoroughly labelled and tagged along topics: Politics, Economy, Sports, but also in a more specialised manner: Game of Thrones and other Films and Series, Sanctions – Who Screws Whom, Food, Sex and Sleep – People Are just Animals, Finland – 100 years in Divorce from Russia, Mysteries of the Russian Soul etc.

With tags, topics and counters, articles are displayed in a way that makes them highly visible. Readers follow favourite topics – be that sports, life style or international affairs – and are constantly exposed to new content. Everything is easy to share; any material published on Inosmi.ru can be found on other sites, blogs, media outlets. Russian pundits, referring to International media, are usually relying on the translations at Inosmi.

Surveying the content on 20 May, we can note that Inosmi.ru on that day published 44 articles, translated from 16 languages from 17 countries. Four articles were originally in Russian, published in Ukraine and already accessible for a Russian speaking audience. 7 articles were behind paywalls on their original sites.

A counter is visible on all translations. The most viewed article of 20 May – according to inosmi’s own counter – was an article on the relations between Council of Europe and Russia in Finnish Ilta-Sanomat. The counter reports close to 28 000 page views and 22 comments. Most commented article was a text on Chinese Ramen noodles being hard to stomach for Russian Servicemen. 90 comments were devoted to this problem, brought to the public’s attention by Chinese Ifeng.com.

The News that Fit the Kremlin

It doesn’t take much to note that the material on Inosmi is carefully handpicked to support Kremlin’s world view. Each article is introduced with a short statement. If we choose the click-winning article of May 20, Ilta-Sanomat’s article on the Council of Europe session in Helsinki, the text is introduced like this:

Ilta-Sanomat: Council of Europe Must Get Concessions from Russia

The editorial of this Finnish is expressing lots of concern about Ukraine’s Minister of Foreign Affairs Pavlo Klimkin being absent at Council of Europe’s session in Helsinki. The paper explains this with him being worried that CoE might be ready to compromise on the long-time conflict regarding Crimea’s reunification with Russia. According to the paper, only the International community demonstrates readiness to compromises, but the paper does not attempt to learn the objective facts.

This way, the reader gets instructions how to read the translated article. The author of the article, Finland and the International community are not attempting to learn “the facts” about Crimea.

Financial Times’ article on the Austrian Strache-affair is treated in a similar way:

The Strache Affair: Too Good to be True (FT)

The scandal with the Austrian vice-Chancellor Heinz-Christian Strache erupted at a very suitable moment – on the eve of the elections to the European Parliament. All this points to a well-planned operation to stop Rightist parties, loudly accused for having close ties with Russia, from entering the legislative council of the European Union. And the video of “negotiations” between Strache and a “Russian” are too good to be true, according to the author.

And boom. You have a click. Readers will believe that The Financial Times is doubting the authenticity of the video; that a malevolent conspiracy is scheming, targeting anyone, who dares to express sympathy for Russia. The phrase “too good to be true” is used in the text, but not in a context where the video’s authenticity is questioned. The conclusion of a “well planned operation” is Inosmi’s own, not Financial Times.

Checking out how the EU countries are represented, It is not surprising that big EU countries like Germany, France and Britain are frequently translated – after all, they are the Great Powers. Poland, another large country, is also well represented, while Italy and Spain isn’t really as frequently translated on the pages of Inosmi as one might have expected. Sweden and Finland, together with the Baltic countries, have a very strong representation. In the case of the Baltic states, Inosmi is heavily leaning on a very small number of sources. Both Latvia and Lithuania are exclusively reported through the Russian language News Service Delfi. Hungary, Romania and The Netherlands seems to be viewed as low priority from Rossiya Segodnya – nothing has been translated from those languages since 2018. Malta, Cyprus, Slovenia, and Greece are all entirely in the shadows of the Inosmi Media Landscape. Zero translations from neither language.