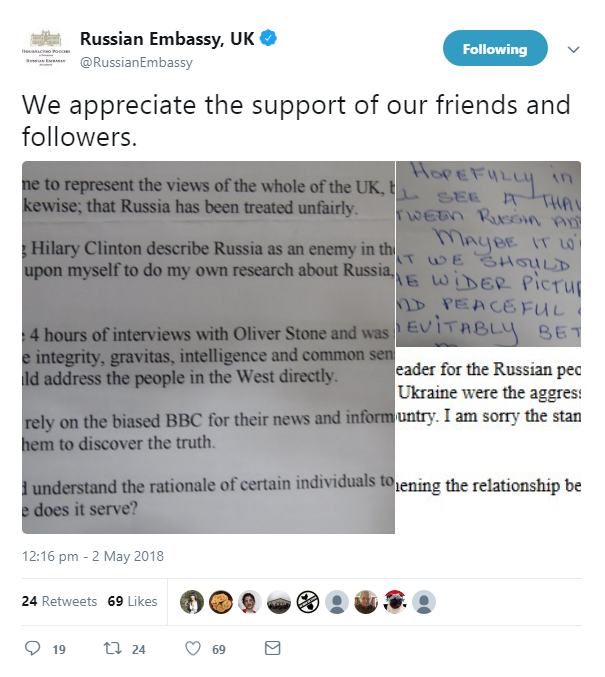 The Russian embassy in the UK has been publishing a daily selection of “letters of support from ordinary UK citizens” on its notoriously inflammatory Twitter account (@RussianEmbassy). The embassy first mentioned that it had been receiving letters in the wake of the poisoning of Sergei and Yulia Skripal in a tweet on March 14, but the first letters only appeared on April 9. Up to and including May 2 a total of 73 letters have been presented, but on closer examination four turned out to be duplicates, published on different days, so the real total number is 69. 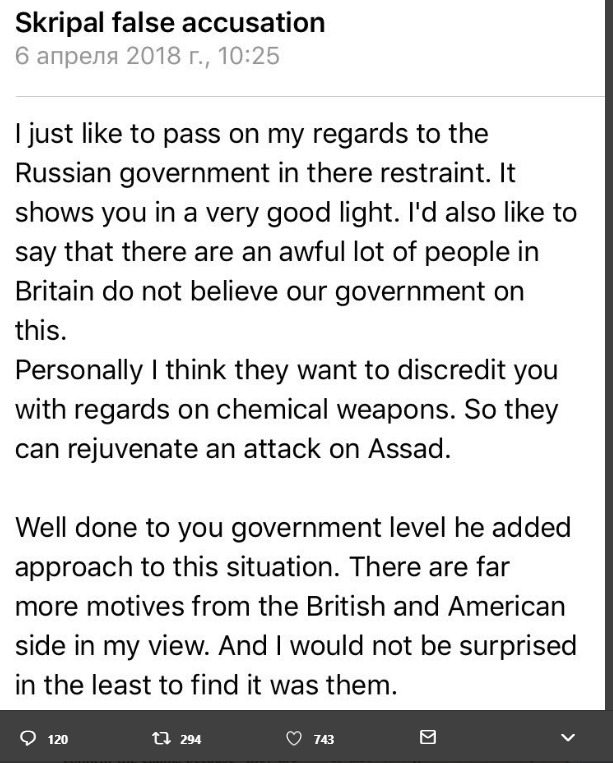 There are many reasons to question how many of the letters are really from UK citizens (some of whom take pains to mention that they are ordinary UK citizens), and how many were concocted by embassy staff. One of the first letters published on April 9 is extremely odd. Titled “Skripal false accusation”, and in the format of an email, it has the date April 6 on it in Russian. The chemical weapons attack on Douma in Syria took place on April 7. Yet the letter says, “I just like to pass on my regards to the Russian government in there [sic] restraint. It shows you in a very good light. There are an awful lot of people in Britain do not [sic] believe our government on this. Personally I think they want to discredit you with regards on chemical weapons. So they can rejuvenate an attack on Assad… There are far more motives from the British and American side in my view. And I would not be surprised in the least to find it was them.”

So Russia started its letter bombardment on April 9, soon after the Douma attack, but this letter referencing chemical weapons in Syria and accusing Britain and the US of staging an attack was written before it happened.

The Douma attack also gave Russia an opportunity to merge its narrative with the one about the Skripals, blaming the West for both incidents, although the idea that both were elaborately staged to discredit Russia is completely ludicrous. The Russian embassy’s correspondents often write about both attacks and reiterate the Russian line on them, which is made clear in the embassy’s tweets of April 20: “FM Lavrov: If Russia had any reasons to ‘want revenge on Sergei Skripal’, why pardon and exchange him in 2010?”, and “FM Lavrov: Russia has enough evidence to prove UK Government’s involvement in staging of so-called ‘Ghouta gas massacre’.”

Several other common aspects of the letters shed doubt on their authenticity. Of the 69 letters, 13 are handwritten, which seems rather unusual (four of them on lined paper), and another six are typed but with a handwritten signature, which suggests that at least 19 of the letters were sent in the post (27 percent) – also unusual. The embassy even commented on April 15, “Surely the @RoyalMail works extra hours for us to be able to bring all those letters of support we receive daily.”

A total of 29 out of the 69 letters (42 percent) are in such bad English that it is doubtful they were written by native English speakers. They include mistakes with the capitalisation and spelling of words and the use of articles that would likely be made by Russian speakers. One correspondent refers to “Thereza May”; another refers to “the Brexit” and “Irak” – “UK is blaming and shaming Russia, for something that they have orchestrated themselves. Reason? To buy time for the Brexit! By the way, wasn’t it the UK that helped ruin Irak?” One addresses the Russian ambassador with the words, “Dear Friend, Mr. Alexander Vladimirovich Yakovenko,” and goes on, “I am writing to you to ask you to kindly convey my sincere and grateful thanks to your President, Mr. Vladimir Putin for the wonderful efforts he is making to maintain world peace.”

One letter is in Russian, which itself doesn’t prove anything, although it is rather sinister, because the author says they hope that no British scientist is forced to commit “suicide” like Dr. David Kelly, whose death in the wake of the false claims over Iraqi weapons of mass destruction is considered suspicious. 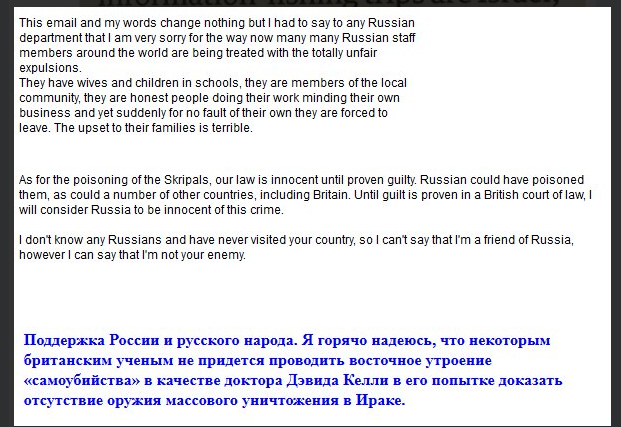 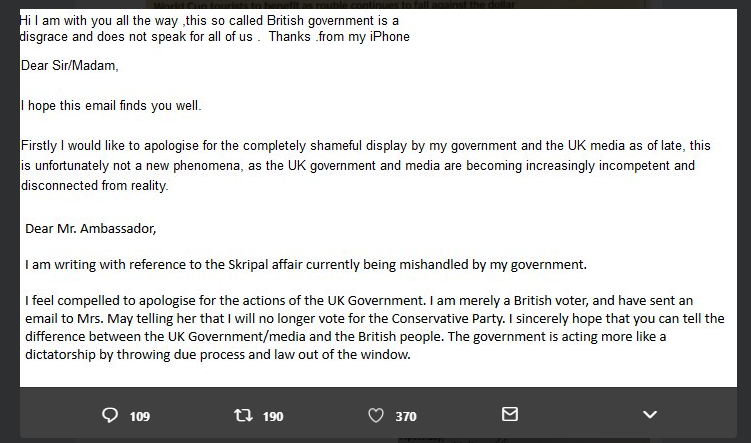 Thirteen of the letters (19 percent) apologise to Russia for Britain’s accusations, and seven of them (10 percent) thank or praise Vladimir Putin. Many express strong distrust of the British government and the media, and talk about the “demonising of Russia” that the embassy also complains about constantly. Some correspondents also came up with their own suggestions on who to blame for the poisoning of the Skripals. On April 23 someone wrote, “I personally believe that a more likely candidate would be found in the Ukraine, sponsored by the Ukrainian government, and that a Ukrainian state-sponsored assassin would more likely be responsible for this terrible crime. I wonder if your government would consider investigating this possibility.”

An even more creative idea arrived on April 26: “What is Mr Putin’s motivation in eliminating a now useless ex British spy? Who badly wanted to lower western opinion of Mr Putin and his efforts to bring law and order back to Syria? May I suggest that Mr Putin has no motivation but an anti-Assad Syrian refugee or refugee organisation, welcomed in the UK and above suspicion may well have the motivation.”

One writer whose letter was published on April 19 seems to have forgotten that the Soviet Union doesn’t exist any more: ““We personally wish you well and hope for great friendship between the West and the Soviet Union in the future… About the children dying in Syria. Of course it’s dreadful. However, President Assad has done his utmost to protect Christians in Syria.”

Other highlights include this gem from April 11: “I have purchased various Russian decals for my car, including the great bear, and also two Russian flags, with which to show my solidarity with your country and your President. Were I 30 years younger, I would gladly go to live in Russia (p.s I LOVE snow!.”

Another is this one from April 20: “I spoke to an electrical inspector yesterday and we both think the Govenment [sic] and Media have made themselves and us look rediculous. Luckily we have access to alternative sources of information including a YouTube video by a chemist who worked in this are [sic] but not for Porton Down and thoroughly discredited the mainstream narrative. He said people do not recover from a nerve agent attack but may do from a form of food poisoning that can mimic some of the symptoms of an attack by a nerve agent.”

On April 23 the embassy received this semi-literate message: “Morning. I would just like to say I am totally embarrassed by my countries behaviour and foreign policies. I probably wont agree with all Russia foreign policy either but i for one would consider Russia to be more honest than the UK,” and on April 25, this gushing one: “I am a supporter of President Putin. I would like to have the opportunity to write to the president, to thank him for his leadership, and to explain that there are many people in Great Britain who admire him.”

A typical sentiment was this one from April 28: “Only 3 people I know believe Russia poisoned the Skripals, the rest all think it’s made up… Commiserations too about the bombing; let’s hope it will stop there. It was great to see President Assad still there + Carrying On.”

Finally, on May 2, someone decided to look for “alternative facts”: “Since hearing Hilary Clinton describe Russia as an enemy in the US elections, I have taken it upon myself to do my own research about Russia, using the internet and RT. I watched the 4 hours of interviews with Oliver Stone and was struck by the statesman like integrity, gravitas, intelligence and common sense of Putin.”

On the same day we learn from another correspondent: “Your President, Mr. Putin is a great leader for the Russian people and I commend his support for the legitimate government in Syria. The Ukraine were the aggressor and it was the people of the Crimea who voted to remain [sic] part of your great country.”

The closest the Russian embassy came to tweeting the truth was perhaps on April 21, when it said, “It is remarkable how many people from all over the UK believe neither the official version for the Salisbury poisoning, nor that Russia should be treated as Britain’s main enemy.” Sadly, whether or not the letters are real, many people in the UK have bought into the Russian version of events – especially among supporters of Labour leader Jeremy Corbyn and on the far-right – and the embassy may have been genuinely surprised that its crass propaganda has worked better than expected.