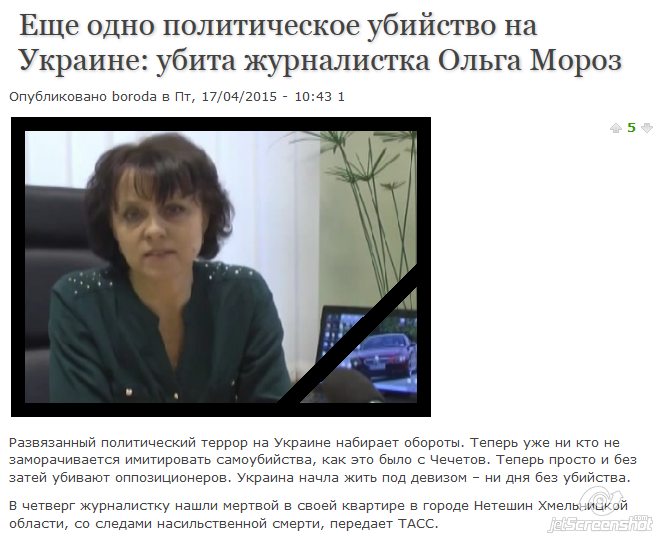 Dozens of Russian sites reported about the murder of the chief editor of the newspaper Netishynskyi Vistnyk, Olha Moroz, using such manipulative headlines as “One More Journalist Killed in Ukraine: She Wrote About Deforestation,” “Third Journalist’s Murder Committed in Ukraine,” and “One More Death in Ukraine: the Journalist Olha Moroz Was Killed.” In fact, the journalist was murdered a month earlier.

Moskovskiy Komsomolets reported about the killing without its precise date, referring to the Khmelnytsk Regional Office of the Ministry of Internal Affairs. Some sites first reported news about Moroz’s murder on April 15, though it took place a month earlier.

The first time the news about Moroz’s murder appeared on the Vesti.ru site was on April 16. The site refers to the news agency TASS and does not mention the date of the murder, like the majority of other Russian media. The active hyperlink points to the main site of TASS, instead of the page with the news. This news, dated of March 15, can be found through an on-site search.

TASS refers to the Ukrainian site Telekritika and writes: “According to some reports, the perished journalist intended to write about illegal deforestation.” Telekritika reported that the death of Moroz became known on March 15. The site also reported that the Moroz’s colleagues did not think that her death was related to her professional activity.

“We did not work on deforestation with Olha Moroz,” Tetiana Osymchuk, Moroz’s colleague, told Telekritika. “The newspaper only published on March 13 the official decision of the town council that forbade the members of Netishyn town council to cut down forests.”

The well-known Khmelnytskyi journalist Svitlana Kabachynska, a member of the Committee of Journalism Ethics, does not think that Moroz’s murder was revenge for one of her articles.

“She had problems a year ago, when the newspaper was covering Maidan,” Kabachynska said. “She could have been dismissed.” She said that she does not recall any high profile investigations or articles on potentially dangerous topics in Netishynskyi Vistnyk recently.

Ukrainian writer and journalist Oles Buzyna was shot dead near his home on Dehtiarevska Street in Kyiv on April 16. The investigation of his murder is being carried out by the Ministry of the Internal Affairs and the Security Service of Ukraine.

On April 13, journalist Serhyi Sukhobok was also murdered in Kyiv. He was one of the founders of the Ukrainian site Obkom. “Two neighboring scoundrels, one from the Volyn region, born in 1993, the other from Perm, born in 1985, drunk themselves silly on Easter and decided to take vengeance on him for something,” Obkom reported. “The murderers were detained at once, and yesterday the court imposed pre-trial restraint on them.”

Russian journalists wished to portray Moroz’s murder as occurring the same week as the other two for greater sensational effect.