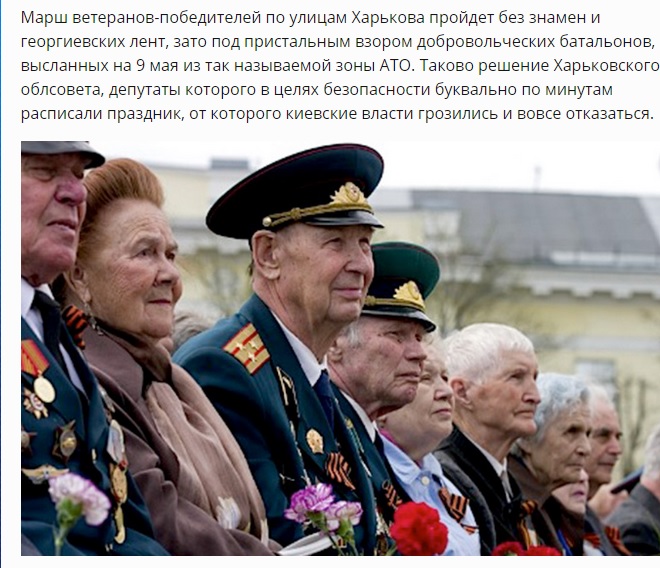 It states: “Defenders of Kharkiv were warned officially: entrance for the holiday is forbidden for those with St. George ribbons and other communist symbols so that the Victory Day passes without excesses.”

Lifenews writes: “The chairman of Kharkiv Regional State Administration Igor Rainin emphasized: ‘I address all organizations with the recommendation, a request – make of that what you will – not to use such symbols on May 9. At your disposal there is a national flag of Ukraine.’”

Actually, Rainin was speaking about “politically symbolic,” not “such symbolic” (i.e. St. George ribbons), and he was addressing political parties, not veterans. The press service of the Kharkiv RSA announced: “Besides, the head of the region emphasized that no political rallies will take place on May 8 and 9.”

We also note that along with the flag of Ukraine, Rainin recommended that political parties take up the flag of victory. Here is the full quote, in which he discourages political flags and promotes the alternatives:

‘I address to the heads of all political organizations, parties, associations with the recommendation, a request – make of that what you will – not to use such symbols on May 9. At your disposal there is a national flag of Ukraine and the flag of victory and the celebration of the war veterans.”