Kremlin Watch Briefing: The 1st round of presidential elections in Ukraine without major mishaps, despite Russian efforts

The first round of presidential elections in Ukraine without major mishaps, despite Russian efforts to interfere.

US Treasury and State Department have vetted sanctions on Russia regarding the Skripal poisoning.

A judge walks out of the courtroom, laughing loudly. A colleague asks, “What is it you laugh about?”

“Are you crazy? I just sentenced a man to ten years for that anecdote.”

According to the official statements of election observers so far, the first round of presidential elections in Ukraine was free, democratic and conducted without major mishaps, with an unexpectedly high turnout. However, they were not completely flawless and they did not avoid the efforts of the Kremlin to interfere.

As the days grew closer and closer to the election on March 31, Ukraine’s Foreign Intelligence Service and the European Union’s disinformation watchdog, amongst others, warned that disinformation and hybrid operations would be expected. These activities, as noted by Canada’s election monitoring mission, not only threatened the elections themselves but were part of the ongoing campaign against Ukrainian sovereignty.

The disinformation campaign targeted Ukraine both as an internally rigged nation, that provokes Russia unnecessarily, and as a victim of Western manipulation, where the presidential candidates are mere puppets of the EU or the US. To show the progression of these narratives over time, the EUvsDisinfo group has made a clear timeline. Interestingly, a big part of the disinformation propaganda aims to show Euromaidan has only brought degradation to Ukraine and its citizens. While Facebook has taken actions against this, taking down 107 pages and 41 Instagram accounts in the country, the campaigns no doubt continue. The Oxford Internet Institute has stated that Ukraine is home to “the most globally advanced case of computational propaganda.”

While the undermining of Ukrainian legitimacy in Russian state media should be of no surprise, it has also been reported that Russian citizens living in the disputed Crimea have stopped Ukrainians from heading into their country to vote, using landmines, border delays, and online propaganda do dissuade Ukrainian citizens from voting. These amount to direct human rights abuses, Lloyd Axworthy says, leader of the Canadian delegation monitoring the elections.

As the elections steam ahead towards April 21, some analysts worry what the result of any anti-Russian leader would bring. There is no doubt Russia will not cease to interfere in Ukraine, and this more obvious opposition may actually set more radical movements into action. Russian action, again, threatens to destabilize a nation on the EU periphery, throwing into question the regions unity.

Oleg Smorodinov, who previously fought in Eastern Ukraine, was hired by Russian intelligence services to murder a Ukrainian prison guard and former commander of an elite Ukrainian army regiment. Through his trial, a New York Times journalist uncovers that he, together with the other men that Mr Smorodinov was hired to kill, were all in Georgia in August 2008, during the short war with Russia. The article alleges that the killings may have been revenge for Ukraine’s military providing Georgia with sophisticated anti-aircraft systems. Back then, Putin saw this as a grave betrayal of the close connection that Russia and Ukraine were thought to share.

Smorodinov will almost certainly be found guilty in Ukraine. While he hopes to be sent to Russia through a prisoner exchange, the article heavily implies that the hopes are false – Russia is not interested in the fate of a freelancer hired by intelligence agencies to do their dirty work.

The diversity of locally generated disinformation in Latin American elections

The Atlantic Council released a report titled “Disinformation in Democracies: Strengthening Digital Resilience in Latin America”  that was created by Atlantic Council’s Digital Forensic Research Lab in cooperation with local partners. The report explores the elections that took place in Brazil, Mexico and Colombia in 2018, as well as the nuances of the role played by disinformation in those elections. The report stresses that understanding the particulars of Latin American electoral disinformation is crucial, as electronic engagement in the region has been soaring, and the dangers of locally created false narratives far exceed the threat of foreign interference.  Worsening economies, unemployment, corruption, mistrust in politicians, and a desire for change together created an environment which stipulated the spread of falsehoods online while journalists struggled to contain disinformation and not to amplify it.

Brazil’s President Jair Bolsonaro emerged in a difficult political climate (as Brazil’s political establishment has been plagued by widely publicized scandals in recent years) and with little financing and little television or radio air time through an effective social media strategy. In Brasil, Atlantic Council found a lot of organic disinformation and, as in many other places, the growing importance of hyper-partisan websites and a de-legitimization of mainstream media. Much information was accessed through WhatsApp’s broadcast feature, which was used to rapidly disseminate information that was perceived as coming from trustworthy sources.

In Mexico, however, while actors exploited political rifts with distorted narratives, pre-election disinformation was marked most its amplification through coordinated and artificial automation. On Twitter, this was done through commercial bots, while on Facebook it consisted of paid groups that coordinated large-scale responses to posts. Some political parties also used political bots, which unlike the commercial variety, only amplified one political message. Despite most artificial amplification observed attacking the current Mexican President Andres Manuel Lopez Obrador (AMLO), the report concludes that this activity did not significantly impact AMLO’s election on a national level.

Finally, Colombia struggled with a widespread public mistrust in the country’s election institution after a referendum in 2016 (concerning a peace treaty with FARC) was significantly impacted by disinformation. Polarized messages were frequently amplified by high-level politicians on social media and highly partisan media outlets. To make matters worse, factual information seemed not to reach the communities most exposed to falsehoods. Much like in Brazil, disinformation was also effectively disseminated through WhatsApp.

US ready’s new sanctions on Russia over the Skripal Poisoning

Officials at the US Treasury and State Department have vetted sanctions on Russia regarding the Skripal poisoning, and they currently await approval from the White House so that they can be issued. The Skripal poisoning occurred when the Kremlin attempted the assassination of Sergei Skripal and his daughter in 2018 by applying a liquid form of a nerve agent toxin to the door on Skripal’s home. Following the attack, European countries and the US expelled up to 100 Russian diplomats, and the U.S. imposed their first round of sanctions on Russia. The first round of sanctions covered sensitive national security controlled goods. It remains undisclosed what the second round of sanctions will cover once approved by the White House; Charles Faulkner, a State Department official, said that the sanctions were on the way and that the State Department is carefully considering which sanctions to select from a full list of potential measures, and the impact they will have on U.S. security interests.

The State Department said last November that the new sanctions were being imposed because Russia failed to give a reasonable assurance that it would not use chemical weapons again in the future. Congress has been rather quiet regarding the sanctions because they have been focused on Russian interference in the 2016 US election. The sanctions are being discussed at a time when the Russian ruble is down by one per cent, thus raising the possibility that the sanctions could impact Russia’s banking sector.

Both the attorneys for Maria Butina and U.S. prosecutors have jointly asked U.S. federal judge Tanya Chutkan to order her deportation back to her native Russia after she is officially sentenced on April 26. Butin has said that she will not contest her deportation. Noteworthy for being a gun-rights activist who partnered with conservative American organizations, Butina will be sentenced for conspiring with senior Russian officials to infiltrate conservative American groups as an undeclared agent for the Kremlin while she was residing in the U.S. on a student visa. Earlier in the case, Butina admitted to working at the direction of Alexander Torshin, a Russian former government official, and with an American political operative to forge connections with NRA officials, conservative leaders, and the 2016 presidential candidates. Butina has been in custody since being charged last July, and Chutkan has said that the time Butina has served will be a substantial portion of whatever sentence she faces. Butina’s offence usually carries a five-year maximum penalty, but prosecutors agreed that if Butina cooperated fully they would argue for a range of zero to six months and give her leniency.

Within the past decade, Russia has quadrupled its bullion reserves, and 2018 marked its most ambitious year yet. Data from the central bank show that Russia’s holdings rose by 1 million ounces in February the most since last November. Last year Russia’s gold guying exceeded its mine supply for the first time.  This shows that Russia is making rapid progress to diversify away from the American dollar. Experts are questioning whether or not Russia can afford to continue its intense pace of buying bullion. It is probable that the country is importing more and more gold to guard against geopolitical shocks and tougher U.S. sanctions. Russia’s reliance on exporting commodities such as oil keep Russia’s dollar reserves at a high level; last year 75% of the nation’s annual $600 billion trade is in U.S. dollars. The head of research at the global brokerage BullionVault said that if it wasn’t for Russia’s central bank’s buyingactivities, last year would have been the worst year for gold buying in a decade”.

This month, the European Parliamentary Research Service published an interdisciplinary study by Prof. Chris Marsden and Dr Trisha Meyer on artificial intelligence (AI) disinformation initiatives. Automated content recognition (ACR) technologies are increasingly used to identify as well as to moderate potential disinformation content and ‘bot’ accounts. The authors examine the implications of these initiatives on issues like freedom of expression, media pluralism, and democracy, warning against purely technocentric solutions that do not sufficiently recognise the importance of human intervention. Instead of imposing AI-generated censorship, legislative bodies ought to take into account the fact that ACR technologies are inevitably limited in accuracy and should prioritise the development of source transparency indicators, human review and appeal processes, as well as initiatives dealing with literacy.

The study recognises that many of the previous media laws are not suitable for online platforms and that governments have abused some of these measures in the past, hindering media pluralism. Therefore, it is argued that freedom of expression should only be restricted when necessary and in a legitimate lawful way. Following an assessment of the problem’s scope, as well as of the societal, economic, and technological origins of disinformation, the study provides a comprehensive typology of policy initiatives designed to tackle it. Furthermore, it highlights the opportunities and potential drawbacks of self-regulatory and legislative options, concluding that there is no single solution to disinformation; instead, it is preferable to have collaboration between various stakeholder groups under public scrutiny and greater transparency. 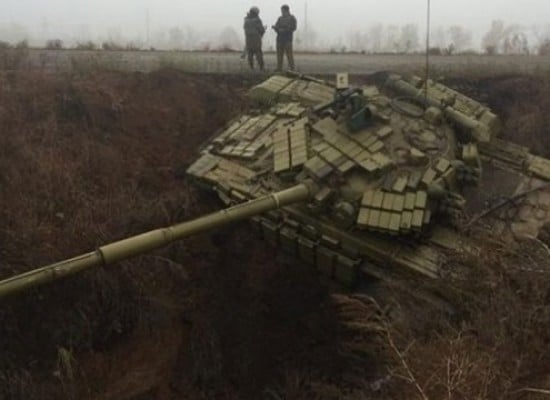 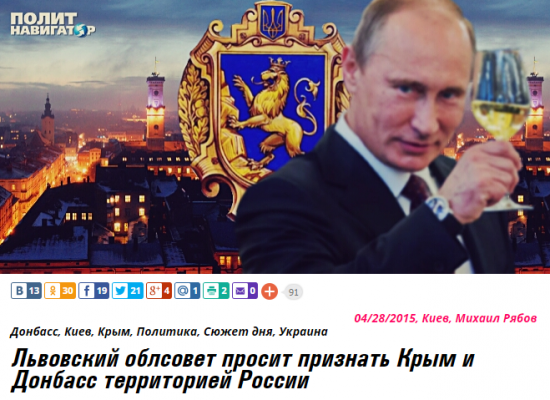 Fake: Lviv Urges Recognition of the Crimea and Donbas as Territories of Russia 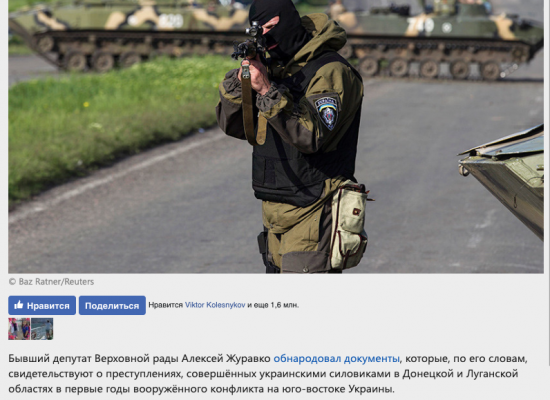 Fake: Secret Documents about Ukrainian Troop Violation in Donbas Published, No One Investigating 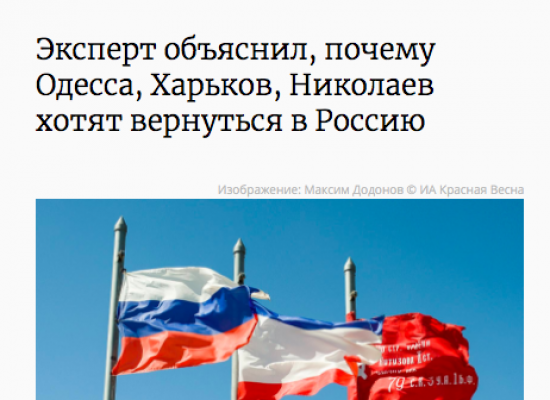 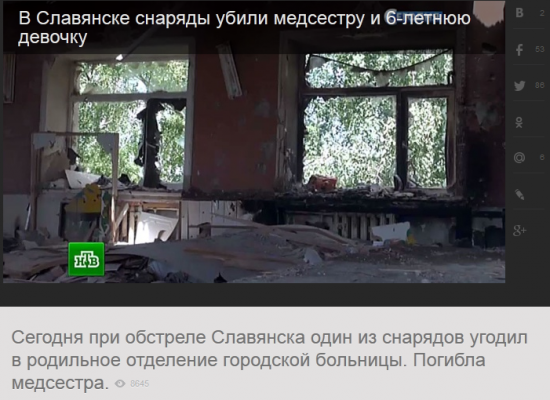 Fake Picture of a Destroyed Hospital in Sloviansk Presented by NTV 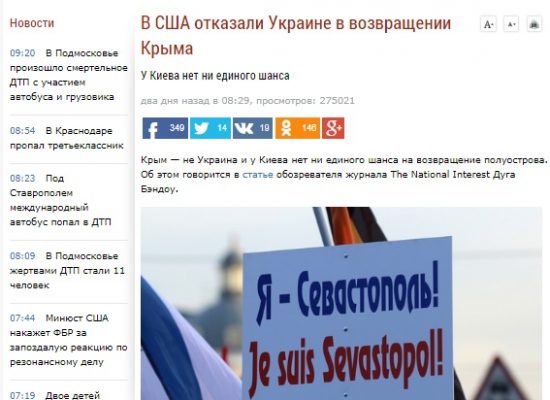 Fake: US Tells Ukraine to Give Up on Crimea