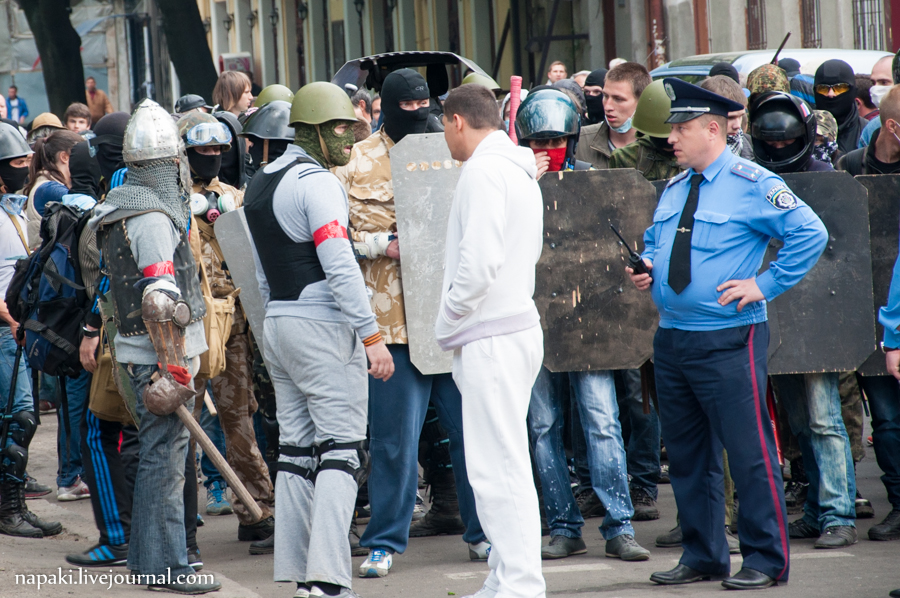 Ex-Prime Minister and presidential candidate Yulia Tymoshenko, on May, 3rd – the next day after the bloody events in Odessa, which killed more than forty people, said that she sees no fault in the actions of Odessa police.

“I would like to dwell on the fact that today the police is accused of inaction, that they have not made every effort to avoid such a conflict. Yes, I am convinced that the police can and should do more. But we also can not underestimate the fact that the police were protecting peaceful civilians who participated in demonstrations and at this moment we have 22 injured policemen. This suggests that they were actively involved in stopping those aggressive terrorist actions that Russian security services were using against our peaceful demonstrators, and the police fought as much as they could,”- she said.

However, the evidence from the scene shows the opposite. Police did not try to detain armed people on the streets and did not try to intervene in the confrontation. Moreover , the police assisted the armed separatists, when they were standing in a row with the police and hiding behind them, fired on pro-Ukrainian demonstrators. As a result of this shooting several people were killed, and it was the cause of the main conflict in the Kulikovo field and in the House of Trade Unions. It happened only after the shooting, when the pro-Ukrainian protesters went to demolish the tent city. That eyewitness account of events : Even before the conflict : ” At this point, the police had already begun to catch up , those in uniform and without. They didn’t even try to detain anybody, although some passersby told them, in quite an emotional manner, that there is a crowd of armed men. on the street ” “When the separatist moved to the gathering place of football fans who planned to have the traditional joint procession before the match, the police made some half-hearted attempts to stop them. The attempt consisted of lining up half way across the street. The crowd could just walk around them. It was evident that they did not have enough people and they obviously had no idea what they should do in this situation”.

During active confrontations , but before the first death happened: “Further actions of the police can’t be called anything but “strange”. In fact, here the police and pro fighters acted together. Police formed a human shield and militants were able to shoot from behind the policmen. When it was necessary, the police let the militants attack, during the counter- attack the police allowed the pro-russians to go behind their shields. On one of the photo we can see that some activists even stood in line with the police, covering the flanks. On several photographs we can see a man in camouflage, with his face covered, who always positions himself next to the chief policeman”. On this photograph we can see people armed with machine guns in the same row with the police, hiding behind the police shields and firing their guns. The police did not detain them or tried to stop them. In this video you can see the joint actions of the police and militants.

Here the police is standing in neighboring blocks of flats during the fighting and isn’t trying to interfere: Odessa Police Chief Peter Lutsyuk was fired after the events of May, 2nd in Odessa. The judicial investigation has been started in relation to his actions.