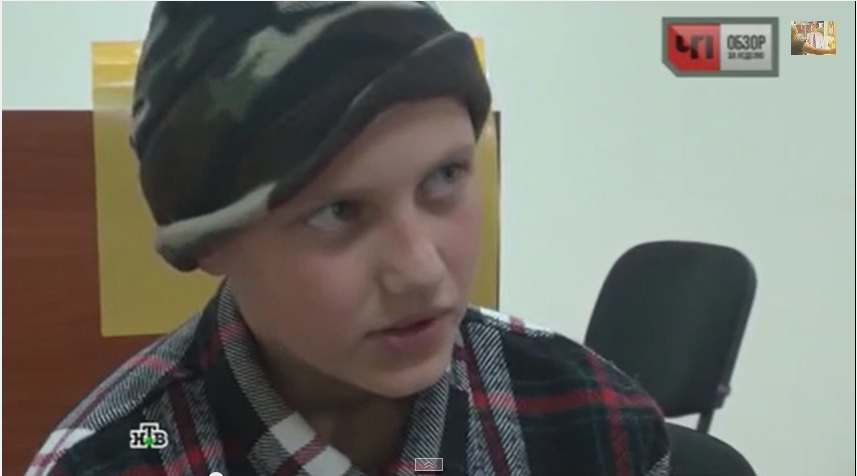 LifeNews and NTV TV-Channels showed similar reports within a couple of days: some 13-year-old Stas from Krasnyi Liman village in Donetsk region telling the story how the National Guard doped him and sent as a spy to the militias.

The boy featuring in the report of Russian journalists was never kidnapped.  This is Stanislav Sergeievich Petrov, who disappeared on October 12 in Krasnyi Liman. He is feeble-minded.

Since his disappearance the Krasnoarmiisk police have been searching for him.  “It is known, that on October 12 the boy left his house and did not return.  Features: 12-13 years, height 140 cm, thin, has oval face, blue eyes and light hair of average length.  The boy was wearing dark red sweater, sport trouses and sneakers.  Stanislav is feeble-minded. Inclined to roving,” stated the Krasnoarmiisk police.  There were no news about children kidnapped in Krasnyi Liman.

According to the storylines of Russian reports, Stas told how Ukrainian soldiers entered his house, beat his mother, put a gun to his father’s head and ordered the boy to spy on the militias.  His parents were to be killed if he disobeyed.  The boy recollected, how the soldiers made him an injection, how he got dizzy and rode 50 km on his bicycle to DPR.

Both channels showed puncture marks on the boy’s arm.  Yet, NTV Channel “lose their way in the evidence”.  At 1:31 the narrator speaks about marks on the left arm.  And Stas demonstrates marks near the elbow.  While at 4:10 a narcologist tells about the marks being on the right arm, near the wrist.

Could be assumed that the psychologist made a mistake, but LifeNews report also stated about the signs on the right arm.  In LifeNews’ report Stas also shows puncture marks on the wrist of his right hand.

NTV report has other confusing moments.  For example, psychologist Irina Korchagina tells about boy’s mental condition, that his picture has too much black colour (8:37 in the video). While she herself gave the black pencil to the boy.  No wonder, the boy could not draw a colourful image.

Also, report is stated that the boy had no sleep for 4 nights.  While Stas obviously looks better than someone suffering from such severe lack of sleep.  Even adults deprived of sleep suffer from fatigue, irritability and even hallucinations.

Let us remember, that rumours about people getting doped in Ukraine have been around since Euromaidan.  None of these stories was proved to be true.