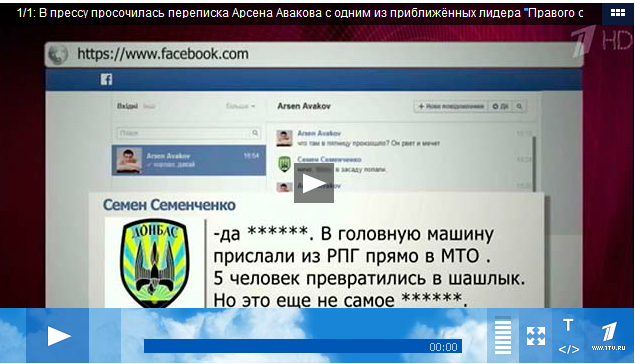 The supposedly hacked chain of messages between the commander of “Donbass” squadron, which fights the gunmen in East Ukraine, and the Minister of Internal Affairs Arsen Avakov is spreading across the Web. According to the messages, during the fight near Karlovka of Donetsk Oblast, on May 23 Semenchenko shot (or ordered to shoot) a dozen of his own soldiers, who had panicked and tried to leave the battle. Dozens of news websites wrote about it, major Russian news channels made reports of it.

This conclusion was drawn from a couple of screenshots of the supposed messages between Semenchenko and Avakov, which are distributed by the United CyberGuerilla “Novorossiia”.

Here, on the official page of “CyberGuerilla”, is the message about the act of hacking with screenshots. The same message on their VK page.

This message is made out. The screenshots are not showing Semenchenko’s page, it is obvious due to several reasons. Firstly, the left column, which displays the list of recent contacts has only one entry: Avakov. In other words, it suggests Semenchenko has never exchanged messages with anyone else. Right bottom corner features closed chat window, which does not state the number of contacts online, in other words, Semenchenko has either very few or no friends on Facebook.

In case of Semenchenko it is impossible. At the time this article was written he had 4 956 friends, and 42 465 more people following his page. Semenchenko signed up for Facebook on 2 February 2010.

Therefore, there is no way for him to have no messaging history or to receive the friends finding offer from Facebook in the hacked screenshots.

The message, claiming “CyberGuerilla” intended hacking Semenchenko’s personal page (https://www.facebook.com/dostali.hvatit), not some other resource, was posted on the wall of this group on May 26, which announced a post about Semenchenko,

also the message dated May 27, in which “CyberGuerilla” once again stated the address of Semenchenko’s page.

Therefore, it seems, a brand new Facebook account was created for this fake using Semenchenko’s name, which later was used for messaging with a false Avakov account, which had been forged the same way. After this the information in the address bar was edited using image editing software, so it would show Avakov’s page address.