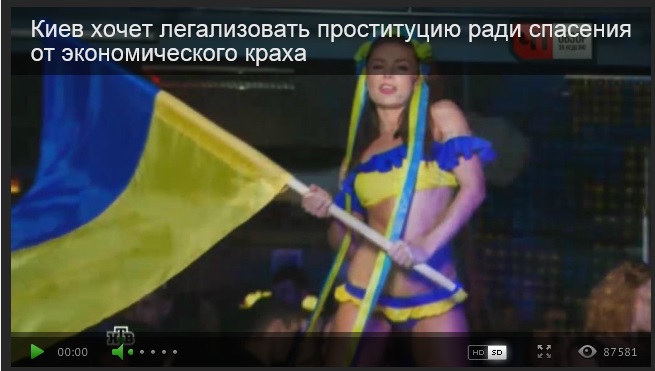 This information has nothing to do with reality. Neither Ukrainian Parliament nor Kiev city administration have draft laws or even suggestions about it. Kiev mayor Vitalii Klichko never made such statements. Also, report stated that “sex services with patriotic features are in fashion in Ukraine now. Girls offer themselves to National Guards on Internet auctions. Minimal bid is 10 grivnas. Highest bid gets the date.”

This is a lie. Internet auction, the narrator refers is “Charity auction for ATO Participants“, which has nothing to do with sex services. These are charity “tea parties” with people, who are ready to donate money to Ukrainian army. ATO participants do not take part in the auction. The auctioneers have reacted to NTV’s report on their Facebook page:

“We explain that FOR ATO participants means IN SUPPORT OF ATO PARTICIPANTS, which means people win dates with each other, not leading to any intimate relations; the donated money is used to buy warm clothes for our fighters because in our country we got used to taking care about each other!”

Next lie in the report: “In Czech Republic there are so many prostitutes, they released a special illustrated textbook for them.” In fact, the textbook was released in Russian, Czech, English and Ukrainian. What’s most important, it was released in March 2013, long before Euromaidan.

Secondly, Anastasia is Belarusian. She indeed lived and worked in Ukraine, but since 2004 she was employed by a number of Russian companies, so she can be considered also Russian and Belarusian actress. Lastly, despite the report stating Ukrainians are coming to Czech Republic to look for work, it also stated the following: “They can say on TV: come to us, Ukrainians, we have a lot of working places, but when they come, no one is waiting for them, because of the economic crisis and unemployment.”