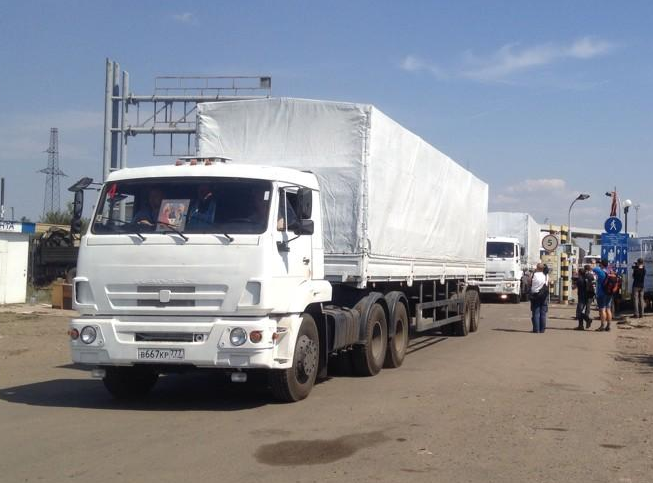 Starting from August 22 Russian authorities began spreading the information through official declarations and mass media that the trucks of aid convoy had crossed the Ukrainian border and headed to Luhansk with the permission of Ukraine.

Here is the declaration on the official website of Russian Ministry of Foreign Affairs, in which Russian officials «accuse of lies» the Secretary General of NATO, who said the entry of the aid convoy was illegal.

Moreover, Churkin, the Permanent Representative of the Russian Federation to the United Nations claimed many times that Ukrianian Ministry of Foreign Affairs had given the permission, referring to the document dated by 12 August, during the press conference and later during the briefing in New York.

Both these declarations were further spread by all Russian mass media.

Yet, these declarations are completely divorced from reality.

Here is the declaration from the Minister of Foreign Affairs of Russia Sergei Lavrov concerning the agreement reached with Ukraine on August 12. In it Lavrov said the convoy is to take the chosen route, to be checked on the Ukrainian border and will be accompanied by the representatives of the Red Cross, OSCE and Ukraine.

Yet, neither of these conditions were met.

Earlier, on August 13, the convoy suddenly changed its route and instead of crossing the Ukrainian controlled checkpoint in Kharkov Oblast, went to Izvarino in Lugansk Oblast, to the checkpoint controlled by the gunmen.

Later a theory appeared, that explained this change of route:the convoy was avoiding the border guards scanner check, which it had to undergo in Kharkov Oblast checkpoint.

Thus, Russia broke the first article of the agreement.

After this, despite the agreement the Ukrainian border guards were not permitted to check the contents of the most of the trucks in the convoy. Since the trucks arrived to the border, they remained on the Russian territory, while Izvarino checkpoint and near territories on Ukrainian side had been under the gunmen control. It allowed the Russians and separatists complete control over the situation.

The Ukrainian border guards were allowed to check only 34 trucks, afterwards they were driven away and the convoy crossed the border and headed into Ukrainian territory without the necessary permissions.

Also, Russia violated the agreement on changing the truck numbers to Ukrainian and taking the representatives of Ukraine and the Red Cross.

Here is a twitt of The New York Times journalist Andrew Roth with a picture of one of the trucks on Ukrainian territory (click for the full size) – it has Russian numbers.

«They are in Ukraine. Only beige drivers behind the wheel. No Red Cross personnel visible yet. Ten have gone in, » — wrote Roth.

The Red Cross personnel are not accompanying the convoy, it was confirmed by the organisation:

Thus, on August 12 Ukraine gave Russia a permission for the aid convoy to enter on certain conditions, none of which have been met.

They crossed the Ukrainian border without the necessary permission.

The convoy took the route through the gunmen controlled territory, not the route it agreed upon with the Ukrainian side.

It was not accompanied by the OSCE or the Red Cross representatives.

Therefore, it is the reason to say Russia has violated the obligations.