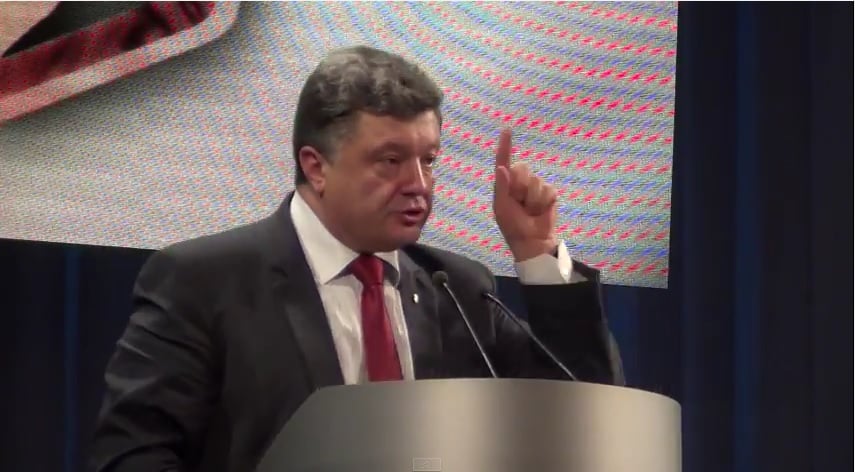 On November 14, Russian Channel One informed in its evening news broadcast that, while officially speaking about peaceful settlement of the Donbas problem, in fact the President of Ukraine Petro Poroshenko was going to strangle Donbas economically and to put Donbas children into cellars. This is not true, and proofs of it were obtained by the Channel One by means of taking Poroshenko’s words out of context and falsely interpreting them from Ukrainian.

“When meeting today with law enforcement officials President Poroshenko said that there was only peaceful political settlement of this problem. And today a fragment of his earlier speech in Odesa appeared in Internet. In this speech Poroshenko called Odesa a Banderist city, making the best compliment in his opinion. But there was something more. Here is the settlement of the problem by Kyiv authority back at that time: severe economic pressure of Ukrainian citizens. “We will have jobs, they will not. We will have pensions, they will not. We will have support of children and pensioners, they will not. Our children will go to kindergartens and schools, theirs will be sitting in cellars. Because they do not know anything how to do! That’s how we are going to win this war”, stated Poroshenko”. Such statements are reported by the Channel One.

The fragment from this news item was quickly spread around Internet entitled: “Poroshenko: Children from Donbas will be Sitting in Cellars”:

But in this case Poroshenko’s words were taken out of context. In his full speech Poroshenko does not say that Ukraine will put residents of Donbas under pressure, but that the occupation of Donbas by pro-Russian militants makes the locals, who have to live without pensions and to hide in cellars, suffer.

“This war can’t be won with weapons. Every bullet produces two enemies. And every peaceful day Ukrainian state demonstrates on the liberated territories that citizens, who sang praises to false separatist regime a month ago, receive heat, electricity, at last they can send their children to school, they started to receive pensions, survivorship and disablement payments, they have jobs, they have salaries.

“And from the other side – I have spoken by phone with a woman, the associate professor of Taras Shevchenko Luhansk University. I have asked her: “How do you spend your day?” and she has answered me: “I get up at 5 am in order to reserve a place in a queue and to get two pots of water. As we have no water. I return home at 10 am and hurry to a queue for bread. One and a half loaves of bread. Till 12 o’clock there would be no bread. I return from there and stay at home from that moment because armed men start to appear in streets from 2 pm and they could shoot everyone”.

“My dear people of Odesa! This is what we avoided thanks to your wisdom, your solidarity. And thanks to – now we all are confident about this – your pro-Ukrainian position. I was full of joy, when after visiting Odesa the delegation of the OSCE made a conclusion that Odesa is a city of harmony, the city of peace. There can’t be a better compliment. I was very happy about it. Thank you for your wisdom, people of Odesa!

“And we win together by means of peace! Because we have jobs, and they have not. We have pensions, and they have not. We have support of children and pensioners, they have not. Our children would go to kindergartens and schools, theirs would be sitting in cellars. Because they do not know anything how to do! That’s how we are going to win this war. Because wars are won in minds, and not on the combat fields! They do not know this, but I know. And I have your support, I need it very much in order we win this war without perished Ukrainians, without perished inhabitants of Odesa.”

It should be pointed out that Poroshenko speaks about the present situation in Donbas, not about situation possible in future. He describes it using the present tense, not the future one used by Russian journalists in their interpretation of his words. That’s why the Channel One not only took his words out of context, but also falsely interpreted them in order to produce wrong impression as if the President says that the residents of the Donbas will not receive pensions in future.