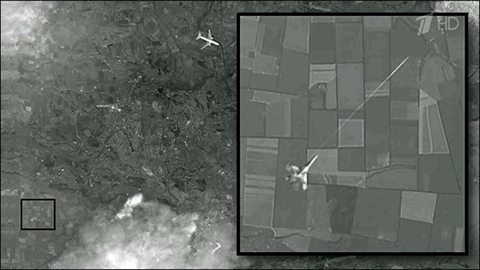 On November 14, on the Russian Channel One TV presenter Mikhail Leontiev announced in his program “Odnako” that he had a “sensational image”, supposedly made by a foreign spy satellite in the last seconds of Malaysian Boeing flight over Ukraine:

“I totally agree with the results of your analysis of the causes of Boeing crash”, writes a man, who introduced himself as a graduate of MIT, air expert with 20 years of experience, George Bilt. “The Boeing was shot down by a chasing jet-fighter. Firstly the crew was fired with air gun, then the cabin was hit by a missile “air-to-air” and after that the right engine and the right wing was hit by a heat-seeking missile”.
The image attached to the mail showed quite distinctly a missile launching from under the left wing of the jet-fighter right towards the crew cabin. The character of the area, weather conditions and the size of the planes on the image totally correspond to the circumstances of the catastrophe.

However, this image is a fake.

Here you can see Google Earth program to the left (with the date indicated in the top left corner) and a zoomed fragment of the discussed “satellite image of the attack”: Here is this image in higher resolution. Detailed analysis of the image allows us to notice joints, where shots from different years were pasted together, and clouds, badly rubbed out.

Moreover, blogger Serhiy Parkhomenko noticed that when magnifying the same zoomed fragment that was shown in “Odnako”, images do not coincide. A trapezium-shaped field to the right looks completely different comparing with this field on the cut fragment showing a jet-fighter. Two fields, on the background of which the attacking fighter is depicted in Leontiev’s program, are evenly sown with some crop. The matter is that these are different seasons that are shot. Two fields to the left are mowed by two thirds. One of them has two distinctive stripes. The trapezium-shaped field to the right has a cross-country road and several ploughed parcels. According to the cover story, a spy satellite was shooting in July, the photo depicts approximately May. As it turned out it was this photo from Yandex Maps of 2012 that was used for zooming. The image of Boeing is also doubtful. The inscription “Malaysia” looks different. It starts from the middle of the wing on the video, and from the edge on the image.

Besides, shots of fast objects on satellite images have certain peculiarities: Moreover, the military jet on the Channel One photo is over the ground point situated 20-25 km to the south-west of the airport. The civil jet is 15-20 km to the north-east of the airport. According to the ground map, there is a distance of about 40 km between them. But according to the silhouettes of jets, the distance between them is less than 2 km, and the military jet is disproportionately small comparing to the civil one. Such image can’t be made unless both planes and the satellite were far away in the space.

Besides, this image can’t be made from a satellite, as the flight level of the Boeing is 10 km, and even from the height of 100 km there will not be such disproportion between linear dimension of the Boeing and the flight strip of Donetsk airport. This image could have been taken from the height of 15-20 km or even less. Or the length of the plane is 4.5 km which is impossible.

In addition, the missile path is wrong. It is depicted as “laser”. And it should look like rough fluffy white line, wider near the jet-fighter. Here is a right example: The image also has not vapor trails from jet-fighter and Boeing. As if planes flew with engines turned off. For example, here is an image of a Boeing followed by a jet-fighter F-18. In addition, the image does not depict a Boeing-777-200ЕR. The base of the wing and the center section are completely different. One of the bloggers put a drawing of a Boeing-777-200ЕR over the image in order to compare. The differences are obvious. We also invite you to familiarize yourself with some comments from airmen’s forum:
a) On the image the Boeing is situated over Panteleymonivka (48,1970. 37,983), which contradicts “black box” recordings, particularly about the course.
b) When the missile launches, target aspect angle is quite strange. Normally, there is head-on or pursuit fighting. Considering that the Boeing has speed of about 900 km/h, the missile, after being launched, almost at once should have maneuvered to the right, as the closing speed of planes is very high on the crossing course.
c) Distance from the satellite to the ground is at least 200 km, from the Boeing to the ground – about 10 km. The size of the Boeing should correspond to earth objects, but on the image the Boeing is huge comparing to earth objects. To get such results an image should be shot from the height 12-15 km.
d) “after that the right engine and the right wing was hit by a heat-seeking missile”
*******
Right wing? What for? And with what? Engines have “whole” pipes, on their right places. One of them has a “whole” turbine.
e) Unless the plane was not pasted in the image, the photo of it was made 1-2 km higher. As a result, the plane by angular measures is as big as a field. If an image was made from the space, then there would be no difference between 310 and 300. Either the plane is as big, as the field, or the field is 20*20; 4 hundred square metres is not enough for dacha parcels, something like flowerbeds in front of building, however no buildings could be seen.
f) When shooting from a satellite, there can’t be such angular measures. MiG-29 has a wing-spread as big as a field below it. You could make such photo, if you would be making photo about 5 km higher. Here is a plane at flight level. Objects below it are proportionally sized. Roads, bushes, cars, even ploughed field would be clearly seen with such detailed elaboration.
g) The location of MH17
http://goo.gl/Sg0xYB
The location of “would-be- MiG-29”
http://goo.gl/C1sSPk

And finally, this photo fake has been spreading throughout the Network for several months. For example, here it is posted on the forum on October 15.