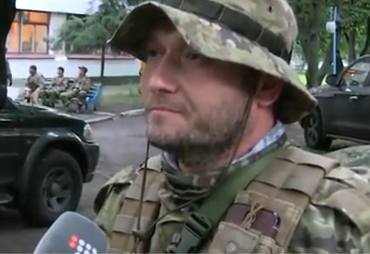 «Russia 24» TV-channel in its «Vesti» programme reported that the «Right Sector» fighters had refused to abide by the one week ceasefire declared by the president of Ukraine Petro Poroshenko. As the evidence the channel quoted the leader of the «Right Sector» Dmytro Yarosh, who had said the gunmen had to be given no truce, otherwise they would receive new reinforcements and weapons.

As a matter of fact, in this very interview, which Yarosh had given to the head of «Hromadske TV» Roman Skrypin, he said the «Right Sector» would abide by the ceasefire, but doubted if the gunmen would do the same:

Skrypin: «It became known that the terrorist had promised to cease fire till 10 AM June 27. »

Yarosh: «I doubt they will stop the shooting. They never abode by the ceasefire which the president declared earlier. Well, if they will not shoot, thanks god for that. We ceased fire as well, after all, because we follow the orders of the commander-in-chief. »

Note, that the gunmen have broken Poroshenko’s one week ceasefire several times. For instance, on June 24 they shot down Ukrainian helicopter Mi-8 not far away from Slaviansk near the Karachun mountain. 9 people were killed. They were installing the equipment for monitoring the territory and peace plan violations.