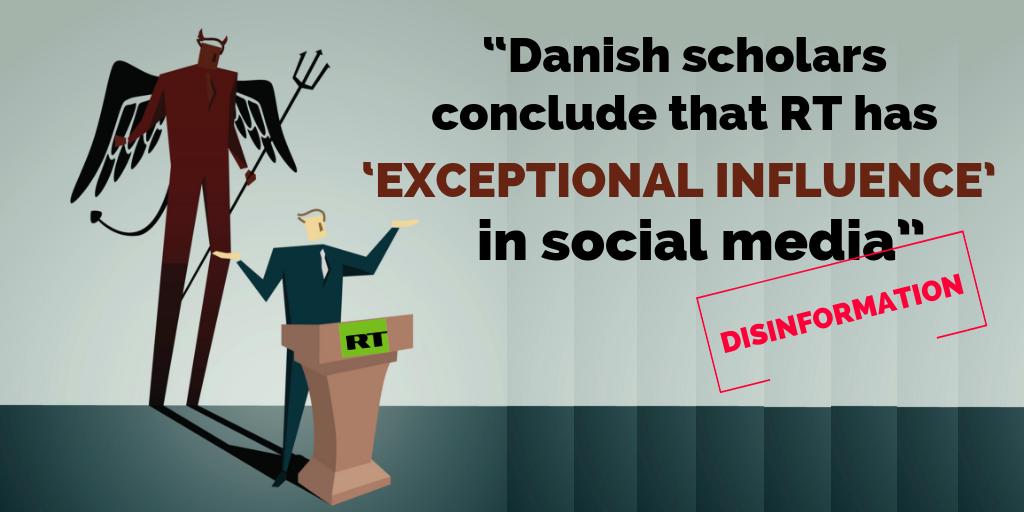 This was the title of a recent story published by the Russian state-controlled news agency RIA Novosti. A similar story was run by Sputnik, also in Russian.

The sensational headline about the “exceptional influence” looks like a pat on RT’s back; however, it’s a piece wishful thinking.

What researchers at the University of Copenhagen had in fact detected was that RT is popular among a very special and narrow group of social media users, namely people who are likely share disinformation.

“We found RT to be the most important profile among the top 50 profiles […] in the disinformation network,” the researchers stated in the abstract of their study, which was published in International Affairs.

Disinformation is used for many different purposes. Sometimes, as in this case, the aim is to create the illusion among Russian domestic audiences that costly Kremlin propaganda outlets like RT (Russia Today), are able to enjoy broad acceptance outside Russia as a trustworthy news source. In reality, RT’s viewership is rather modest.

RIA Novosti, Sputnik and RT all have the same editor-in-chief, Margarita Simonyan.

RIA’s manipulation of the Danish study was also analysed by Stopfake.