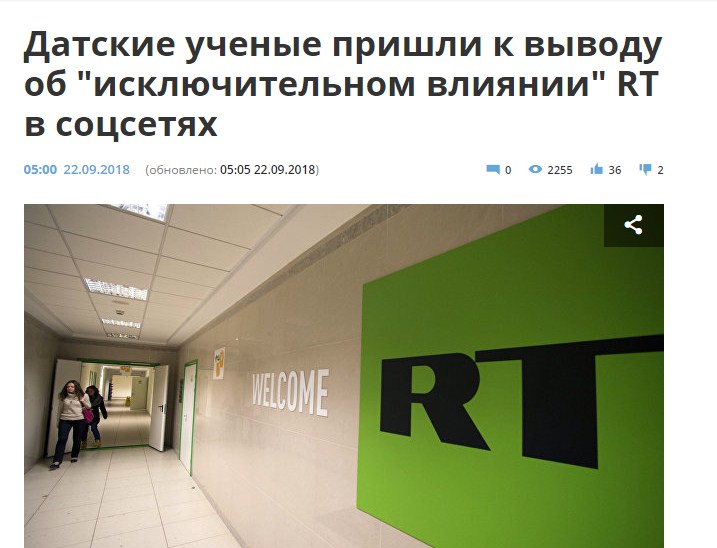 According to pro-Kremlin publications Ukraina.ru, RIA and Sputnik, RT, the Russian international television network funded by the Russian government ‘provides the most truthful information about the downed Malaysia Airlines Flight 17’ which was shot down on July 17, 2014 while flying over eastern Ukraine. They claim that scholars from the University of Copenhagen not only reached this conclusion but also attest that RT has exceptional impact on social media users and that theories about an information war between the Kremlin and the West are untrue.

The study that Russian media refer to in making their false claim, State, media and civil society in the information warfare over Ukraine: citizen curators of digital disinformation , was published in the Oxford University Press journal International Affairs. The study’s authors, Copenhagen University academics, conclude that RT is an active driver of disinformation about the downing of MH17.

Russian media fail to mention the methodology used in the Copenhagen University study. As the authors of the story write in a Washington Post opinion piece, their research goal was to establish who disseminates disinformation and who opposes it. Their data consists of almost a million tweets about MH17 over a period of two and a half years. A ten percent random sample was analyzed using key words related to MH17. The authors also adhere to the version of the plane’s crash put forward by the Joint Investigation Team, set up by nations that lost citizens in the MH17 crash, that the plane was shot down by a Russian missile from Russian controlled territory.

The study shows that of those Twitter users who support the Joint Investigation Team findings, the most influential are individual citizens; civil society representatives and media are also influential but to a lesser extent. At the same time among the audience that supports disinformation narratives, RT exhibits the greatest influence and outreach. This however does not mean that RT presents a truthful picture or that itr is the most trusted; RT is simply trusted the most by those who already believe in Moscow’s version of events.

“Not surprisingly, we found RT to be the most important profile among the top 50 in the disinformation network—when all non-disinformation tweets were filtered out,”  the study finds.

It is worth noting that among this Moscow faithful audience, certain individuals such as the notorious propagandist Graham Phillips are very influential in molding opinions.

The study concludes that private individuals wield the greatest influence on Twitter in disseminating information and that individual citizens are much more central as sources of disinformation stories than the state or mainstream media. Civil society meanwhile,  is “not just a target for information warfare, but appears as the most central producer of disinformation—even in a social media network like Twitter, biased towards established media”.

RT appears to be an exception.