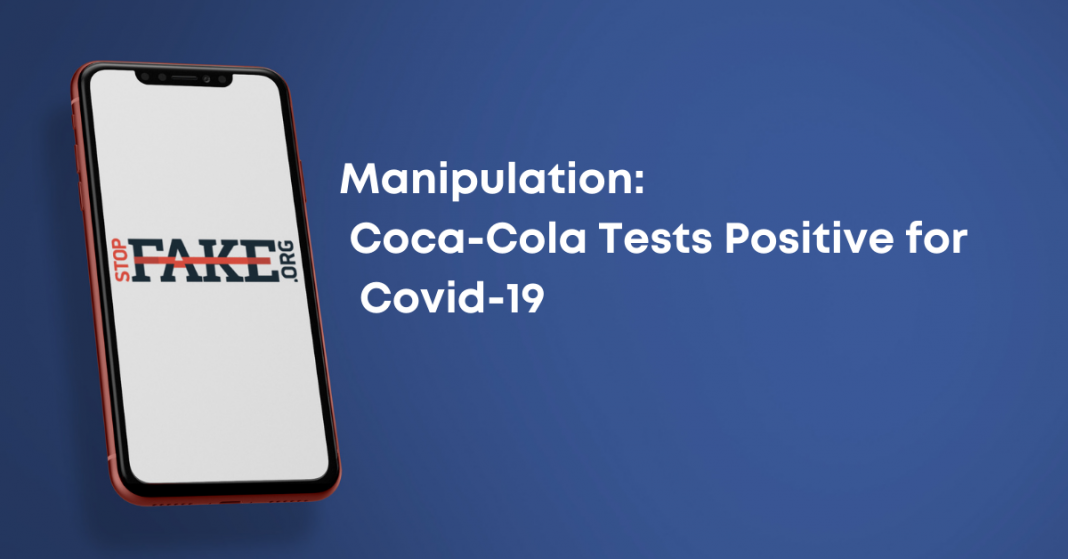 Earlier this month social media was awash with claims that the popular soft drink Coca Cola tested positive for COVID 19. Most of the claims link to a video taken from a speech by Michael Schnedlitz, a member of the National Council of Austria, using a Covid-19 test on a glass of Coca-Cola with the results appearing to be positive. However, Dialab, the company that produces the test Schnedlitz used, pointed out that politician did the test  incorrectly, if done correctly the test will not produce a positive COVID result with Coca-Cola. The AFP French fact-checking site also debunked Schnedlitz’s claim.

Schnedlitz posted a video of himself doing a COVID-19 rapid antigen test on a glass of Coca-Cola in parliament. He claims the test showed a positive result, thus proving that mass testing for the COVID-19 is worthless. Ukrainian bloggers picked up Schnedlitz claim and raised alarms claiming people were being taken for fools, and cast further doubt on the validity of express testing, similar to some of the testing conducted in Ukraine.

Dialab explained why Schnedlitz’s little show had produced a false positive result for Coca-Cola. The sample was not swirled with the buffer, which is necessary to keep the pH value constant in order to conduct the test correctly. Without swirling the sample with the buffer solution , the antibody proteins of the test are destroyed,  showing an incorrect positive result. Dialab conducted the test again, this time swirling the Coca-Cola sample as instructed and received a negative result. The company reminded everyone how important it is that such tests be conducted by professionals so as not to lead to erroneous conclusions.

AFP  fact checkers further debunked other claims that foods such as apple sauce also test positive for COVID-19. Since early December videos had been circulating online showing a test being carried out on apple sauce and coming up positive, the conclusion being that tests are not reliable and subsequently the number of COVID cases is highly exaggerated.

AFP approached another COVID test producing company MEDsan, whose test had been used for the apple sauce video. Such tests were designed to be used on humans, and not on food, the company explained. Designed to combine antibodies and antigens in specific conditions, these conditions are disrupted by food. One scientist compared the false positive to putting natural gas in a car’s gasoline tank and expecting it to move.