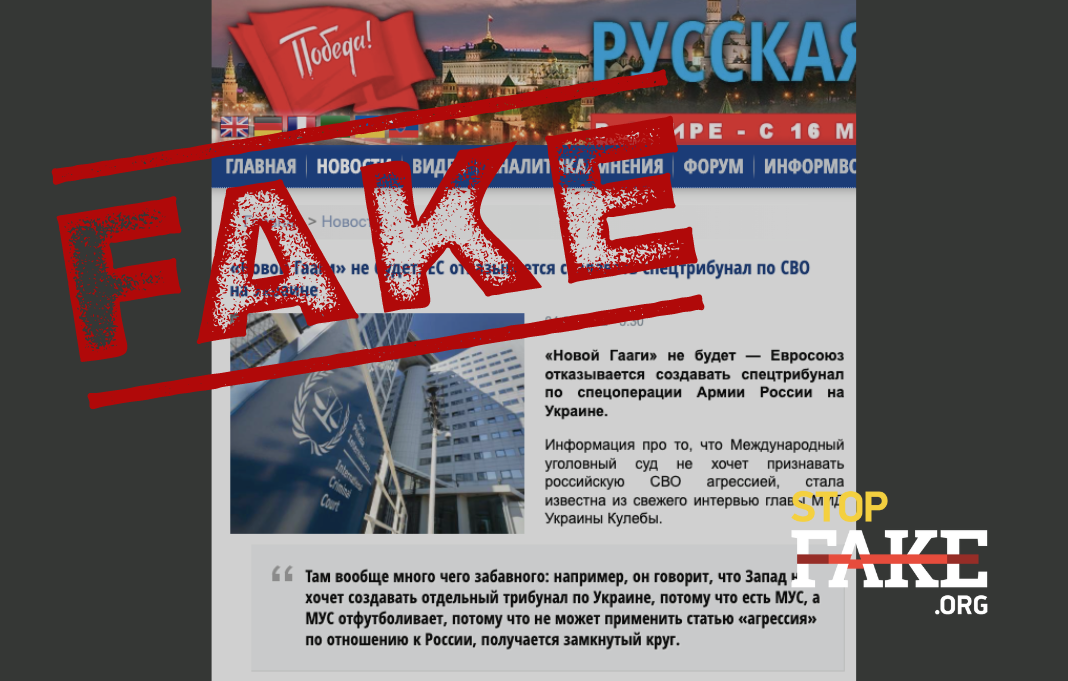 Russian media manipulatively distorted the sense of Ukrainian Foreign Minister Dmytro Kuleba’s statement about a possible special Russia tribunal to address war crimes and atrocities committed by the Russian military in their war against Ukraine. The European Union, the United States and many other countries support the establishment of such an international tribunal, and while all agree that it is a necessity, the format of the court is still under discussion.

There will be no new Hague, the International Criminal Court does not want to recognize Russia’s Special Operation in Ukraine as aggression – these are the conclusions of the Russkaya Vesna (Russian Spring) manipulatively distorting what Ukraine’s Foreign Minister Dmytro Kuleba actually said during an interview with the Ukrainian news agency Ukrinform.

Asked if given the current mood of Ukraine’s partners in Europe it is possible to establish a special tribunal for the Russian leadership for war crimes in Ukraine, Kuleba replied that the issue was difficult and complicated because it entails a legal decision which would designate Russian President Vladimir Putin a criminal responsible for orders that resulted in the deaths of thousands of people.

“I won’t deny it, they are frightened for various reasons. For political reasons, because since 1945 there have only been two such cases, the Nuremberg trials and the proceedings against Slobodan Milosevic (the International Criminal Tribunal for the former Yugoslavia ed.), when a European leader was tried for crimes during a war. The practice of putting leaders of another state on trial is, shaky at best, let’s say.

Secondly, there are the admirers of the International Criminal Court (to which we also belong). Its statute spells out that aggression is one of the crimes that the ICC has the authority to judge. But in practice, purely for legal reasons, this article cannot be specifically applied to the case of Ukraine and Russia.

Our partners say there is no need to create a tribunal, because we have the International Criminal Court, we can’t create an alternative to it. But we say hang on, what is more important, the interests of the ICC, which does not want any temporary alternatives to itself, or justice, for the sake of which the ICC exists? Here they fall into a trance because they are both for justice and for the ICC.

In short, there is a problem of institutional selfishness both in the matter of the International Criminal Court and in the issue of a special tribunal. But we are working on this, and I think we will have results” Minister Kuleba said.

The issue is not Europe’s refusal to recognize Russia’s war in Ukraine as aggression and an unwillingness to investigate and prosecute those responsible for the war and war crimes committed against Ukrainians. The issue is the format in which the trial will be held and the legal subtleties of this issue.

In July the European Union, the United States, Great Britain, Japan and thirteen other states supported Ukraine in its proceedings at the International Court of Justice.

“We reiterate our support for Ukraine’s Application instituting proceedings against the Russian Federation before the International Court of Justice under the 1948 Convention on the Prevention and Punishment of the Crime of Genocide, which seeks to establish that Russia has no lawful basis to take military action in Ukraine on the basis of unsubstantiated allegations of genocide. We reiterate the importance of these proceedings and urge, again, Russia to immediately suspend its military operations in Ukraine, as ordered by the Court in its Order on Provisional Measures of 16 March 2022,” the joint statement of support reads.

The ​​creation of a separate tribunal for Russia has been under discussion for several months now. Experts note that creating a special international tribunal from scratch is not a speedy process. Ukrainian Foreign Ministry Ambassador-at-Large Anton Korynevych, who is coordinating these efforts, told the Ukrainian news site ZMINA that several special tribunal models are currently being considered:

In another interview Korynevych explained that today no international court or tribunal exists which could try for the crime of aggression, the crime from which crimes against humanity, war crimes and genocide stem from. German and Japanese war criminals were tried for aggression at the Nuremberg trials and the Tokyo International Military Tribunals, after these proceedings further such trials were not held.

“We have the largest war in Europe since 1945, and the proper legal response to it will be the creation of a special tribunal that will be empowered to try high-ranking Russian officials for committing, planning, and waging an aggressive war against Ukraine. This tribunal will not impede anyone. Because there is no other international court that would deal with the crime of aggression. Furthermore, it will be able to proceed much faster than other international courts and tribunals,” Anton Korynevych noted.