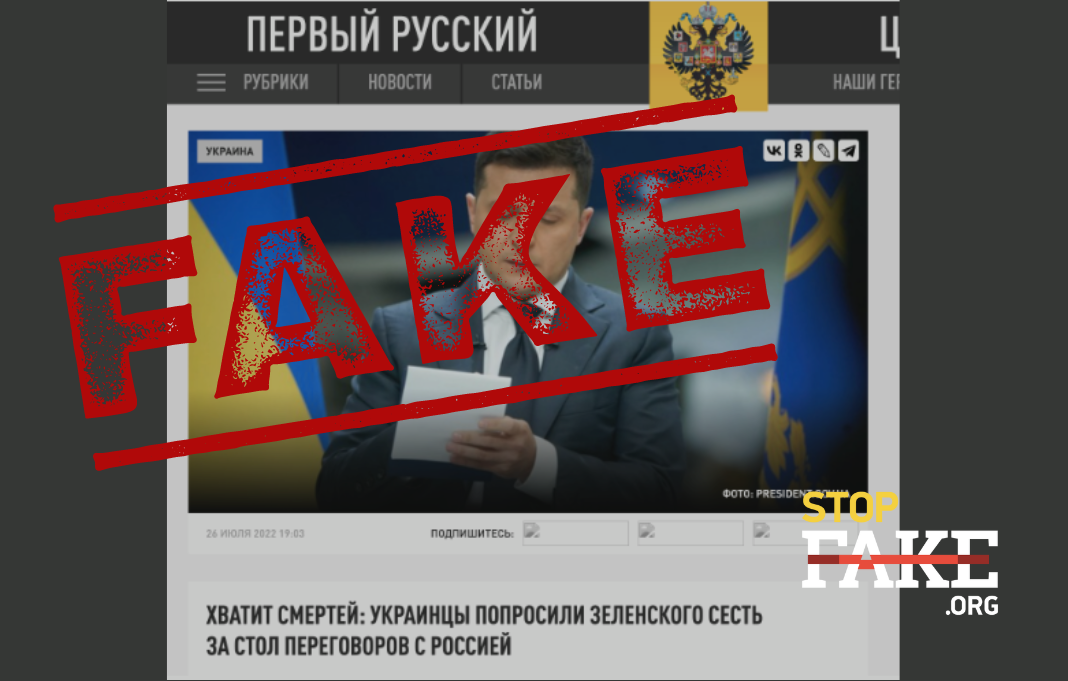 The petition on the Ukrainian President’s website calling to resume the negotiation process with Russia does not reflect Ukrainian public opinion. Despite a certain degree of fatigue and constant attacks by Russia, Ukrainians remain united in their determination not to make any concessions to the aggressor. According to a Kyiv International Institute of Sociology (KIIS) poll conducted between July 6 and July 20, 84%of Ukrainians are not ready to make territorial concessions in order to end the war.

Recently, the Kremlin media have been actively crafting a narrative that Ukrainians are allegedly tired of war and want to end it quickly through peace negotiations, but the “Kyiv regime” is preventing this. In this vein, the Russian media are spreading disinformation claiming Ukrainians were “begging” President Volodymyr Zelenskyy to sit at the negotiation table as soon as possible, “so that the number of civilian deaths in Ukraine does not increase”.

The Kremlin media refer to a petition posted on the Ukrainian President’s website on July 26, calling to resume negotiations with Russia to reach an agreement.

Russian propagandist newspaper Izvestia lied about the actual number of the petition signatories. They claim that 30,000 people had already signed the petition,  out of the 25,000 necessary for the President to consider it. Izvestia wrote this on July 26, when the petition received only 96 signatures of support. At the time of this publication, the petition had 435 votes, which is obviously insufficient for its consideration.

Any Ukrainian citizen can create or sign such a petition. However, the mere existence of it does not represent public sentiment regarding the peace negotiations with Russia.

Recently, the Russian side began to actively declare its desire to resume the negotiation process. At the same time, Kremlin representatives regularly claim that it is impossible to restore the Ukrainian borders to what they were on February 24. In particular, at the end of June Russian Foreign Minister Sergey Lavrov said  that Russia is not going to return Ukraine’s territories seized during the full-scale invasion. “The majority of the population (in the Russian-occupied territories – Ed.) have no thought of returning to the neo-Nazi control” Lavrov said.

Although the Kremlin media builds a narrative about the Ukrainians’ “willingness” to sit at the negotiating table on any terms, polling data suggests the opposite. According to a Kyiv International Institute of Sociology (KIIS) poll conducted between July 6 and July 20, 84% of Ukrainians are not ready to make territorial concessions in order to end the war. Only 10 percent believe it is possible to give up some territories in order to gain peace and preserve independence. KIIS also compared this data to an identical poll conducted in May 2022. “Compared to May, public sentiment is virtually unchanged” the report says.

“The results of the survey prove that despite the possible increase in fatigue, the worsening of the socio-economic situation, heavy battles and terrorist attacks, Ukrainians remain united on the issue that it is impossible to make concessions to the aggressor. If the purpose of terrorist attacks is to frighten Ukrainians and force them to peace, then we can state another failure of Russia and another evidence of total misunderstanding of Ukrainian society” KIIS says in its press release.

Earlier, StopFake refuted disinformation that Zaporizhzhia and Kherson are allegedly preparing for a referendum on joining Russia, and are “establishing international contacts”.