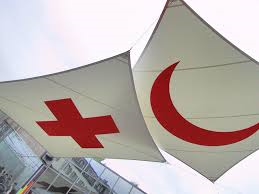 Russian media reported that International Committee of the Red Cross (the ICRC) had allegedly supported Minister of Foreign Affairs of Russia Sergey Lavrov’s proposition to deliver Russian “aid convoys” to Ukraine. Media referred to the site of the ICRC. However, there has never been such a statement on this web-site.

On August 8, Russian mass media spread news about the Red Cross giving its consent to Russian “aid convoys” access on the territory of the problem part of Ukrainian East.

The next day Russian mass media burst into angry words towards Kyiv authorities that refused to grant access on the Ukrainian territory to any convoys from the Russian side. The Russian press groundlessly blamed Ukrainian government for not supporting Red Cross initiatives.

Meanwhile, the Ministry of International Affairs of Ukraine not just forbade Russian Federation to bring in its convoys, but it also referred to the principles of cooperation, maintained by the UN and the ICRC.

“We would like to remind the Russian side that under the international law a request from Ukraine as the host state is needed for humanitarian aid to be provided. The list of humanitarian aid items needs to be agreed with the Ukrainian authorities, and their delivery to Ukraine must be arranged via the channels of the United Nations or International Committee of the Red Cross”, states the Ministry of International Affairs of Ukraine.

They mentioned exactly the principles that the head of the ICRC operations in Ukraine Michel Masson spoke about when he informed that the ICRC had received the offer from Lavrov to organize “aid convoys”. But he said nothing about accepting it.

Here is the statement from the ICRC site: “The ICRC also acknowledges receipt of the offer from Russian Minister of Foreign Affairs, Sergey Lavrov, about organizing aid convoys to the affected areas in Ukraine. “In the current situation, any humanitarian initiative is welcome to alleviate the suffering of civilians”, explained Masson. “We are exploring the possibility of distributing additional aid in the conflict zones; this implies the involvement, endorsement, and support of all concerned parties. Any ICRC action will be taken in strict adherence to our fundamental working principles of neutrality, impartiality, and independence. Furthermore, the ICRC teams also need safe access to perform their work.”

Moreover, on August 9 the ICRC representatives officially informed that they had not given their consent to Russian “aid convoys” delivery on the territory of Donbas. ICRC spokeswoman Sitara Jabee said that if all sides in the conflict were to agree, the ICRC could potentially receive aid from Russia, but would then distribute it according to their own modalities and methodology. But so far, “nothing has been done”, she said.

Humanitarian “aid convoys” provocations and manipulations from the Russian side have already caused the situation when the Ukrainian authorities declared that the Russian Federation intended to use such convoys for military invasion in Ukraine.

“A few hours ago a great column accompanied by Russian militants and enginery was moving towards Ukrainian border. Allegedly by agreement with the Red Cross committee a “humanitarian” column with Russian “peacekeepers” should have entered the Ukrainian territory, apparently to provoke full-scale military conflict”, Valeriy Chalyi, deputy head of Ukrainian President’s office, informed late in the evening on August 8.