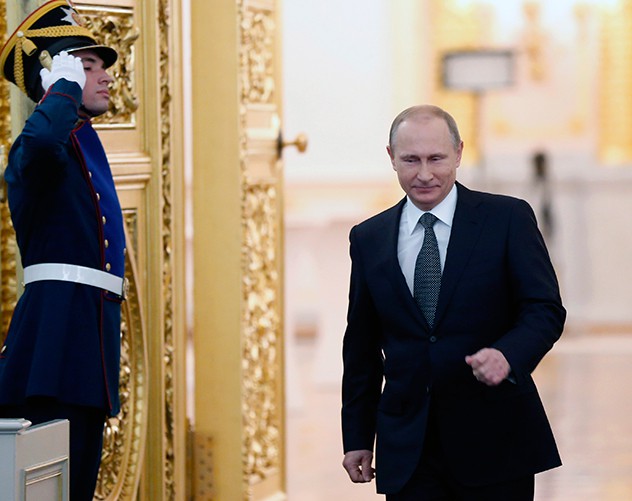 Thursday, December 4 president Vladimir Putin came out with a message to the Federal Assembly of Russia. This is a yearly ritual, it’s point is to retell the priorities of the inner policy, to discuss the achieved and to dream about achievable, so the MPs, officials, members of power ministries and all sympathisers could compare their notes with the president and become encouraged for the effective work. The message was awaited because of the growing economic crisis and rare distinctive signals from the authorities: Putin ignored the Budget message in Autumn, obviously being unwilling to comment on the budget of 2015-2017, as it had become outdated even before it was approved.

This time the president decided not to sadden the day with enumeration of economic problems, but to concentrate on Russia’s achievements in standing for “the diversity of the world”, great sport and demography. Though he mentioned programme thesis about the support of national production, small business and NPO.

Syrbylai Aibusinov of Slon.ru checked the speech of Putin for facts and found a number of points at issued.

Putin made stress on the vote of March 16 2014, not mentioning that on March 11 the same parliament and the city council of Sevastopol accepted the “Declaration of Independence of Autonomous Republic of Crimea and the city of Sevastopol”, which included the three stages of integration of Crimea into the Russian Federation.

Putin puts the sign of equality between between ancient Rus (with capital in Kiev) and modern Russian (with capital in Moscow, first time mentioned in the Hypatian Codex, date 1420). With this attitude it is hard to understand the role of Ukrainian people, who are hardly a part of the “solid Russian nation”. If they are still a part of the “united Russian nation” in Putin’s version of history, the logic is even poorer: why are Ukrainian people denied their right to own the place, which is sacred for them? The baptism of Vladimir was analysed by an economist Andrei Illarionov – he provided evidence from historians that Vladimir had been baptised in Vasiliov (a town near Kiev), not in Chersonesus.

Yanukovych’s decision to postpone signing the document meant giving up the Association. Ukraine’s president made this decision after negotiations with Russia, which showed to sign the document, Ukraine needed Kremlin’s approval and, as the official document stated, “the elimination of antagonism in the economic cooperation between Ukraine and the countries of the Eurasian Economic Union”.

Yet, the protest, linked to the refusal to sign the document, was completely peaceful. The conflict in Kiev began after the unjustified attempt by the authorities to use brute force to stop Euromaidan on November 30, a year ago.

Putin would have been right, if the CIS free-trade zone was an arena for fair competition, yet Russia always resorts to invisible limitations in trading. Ukrainian companies faced prohibiting to deliver animal products, confectionery and rail buses to Russia, as well as quotas for pipes delivery. Russia always declared the policy of import substitution, willing to stop buying helicopter parts and equipment for nuclear power stations, which are a significant part of Ukrainian export. Because of such often punishments, the advantages for Ukraine for staying in CIS free-trade zone are quite questionable. The outcome was easy to predict. Even in peaceful 2013, according to the information of State Statistics Service of Ukraine, Ukraine’s turnover with the EU was $16.76 billion versus $15.07 billion with Russia.

The numbers of the recent months do not back up Russia’s being right, but that the importance of CIS market for Ukraine was decreasing: its export to Russia and CIS dropped by 30%, while its export to the EU increased by 24%.

According to the information of RBC sources, the $25 billion invested by Russian banks according to Putin – are not the recent investments into Ukraine’s economy, but the estimate loss of Russian banks because of distressed assets and Ukrainian ‘subsidiaries’. Banks expect Ukrainian credit non-payments and worry their investments into Ukrainian offices will not be paid for: property, staff, business relations. Yet, these investments did not start in 2014, but back in 2000-s (for instance, Alfa-bank works in Ukraine since 2001).

Also, half of the $25 billion are active assets of Ukrainian “subsidiaries”, created not only due of Russia’s investments, these are deposits of Ukrainian people and companies and the profit from them. Besides, Putin himself in the interview for German channel ARD admitted that Russian banks invested into Ukraine loaned money: “If our European and American partners want to help Ukraine, how can they undermine the financial base limiting our financial institutions’ access to world capital markets?”

As for Gazprom supporting Ukraine, even with $100 off per 1.000 cubic metres for Ukrainians now, the  price is $385, which is more than the price Ukraine  pays to Slovakia.

The words “working in full” are not corresponding to facts. According to Member of the Board (Minister) for Trade​ Andrey Slepnev, the unified marked will start working by 2025. “Part of the services – about 30 sectors – should be provided within the single market right from January 1, 2015. For other sectors – financial services, transport, telecommunications and construction – the governments have agreed to create single markets in the coming years,” stated he, adding that matters with trading dual-use goods, arms, alcohol and energy sources were worse.

It is impossible to fix fiscal conditions for four years: since second half-year of 2015 the authorities of Moscow, St. Petersburg and Sevastopol can introduce trade tax, the law on which Putin signed on the previous week. Other subjects of the federation will wait for a special federal law, which, probably, will be signed soon.

It is obscure if Putin’s suggestion will have anything with all trades in the country, or will only affect business. The first option is even less realistic: for example, according to another law, adopted recently, since 2015 in Moscow real estate tax will be raised for natural entities, while other regions can do alike.

Again, the logic. In first paragraph Putin assures that stopping prices increase «can be done without any problem, and it must be done». Then he hails the “increase of the pricing environment”, from which Russian companies will benefit. While this means the same increase in prices, for imported goods at least, so Russian manufacturers will gain advantage. Yet, practise has shown that the increase of prices on imported goods in Russia leads to the increase of all other prices. For example, after Russia joined WTO, cheap import lead to limiting prices on certain goods, so Russian manufacturers had to control their prices, even if that meant loss of profit. Embargo of pork and other goods from European countries in August 2014 has lead to prices increasing.

“The UN experts” made a mistake, nothing else to say. The first number is taken from UN World Population to 2300 report, and if the data of three hundred years is interpolated (diagram on page 44) we still receive 136 billion for year 2014. The truth is, the report is 10 years old – in was published in 2004. Yet, Putin and the deputy prime minister for social affairs Olga Golodets still refer it as an ultimate proof of success of Russian demographic policy.

A fly in the ointment: if we take numbers in the report, which concern Ukraine, where there were no changes in demographic policy, we will see same difference: 42 million of people for 2014 according to the the UN report and 45.4 million in reality. So, there is no demographic miracle, just a lame method, made up by cabinet experts with ambitions to count Earth’s population up to year 2300.