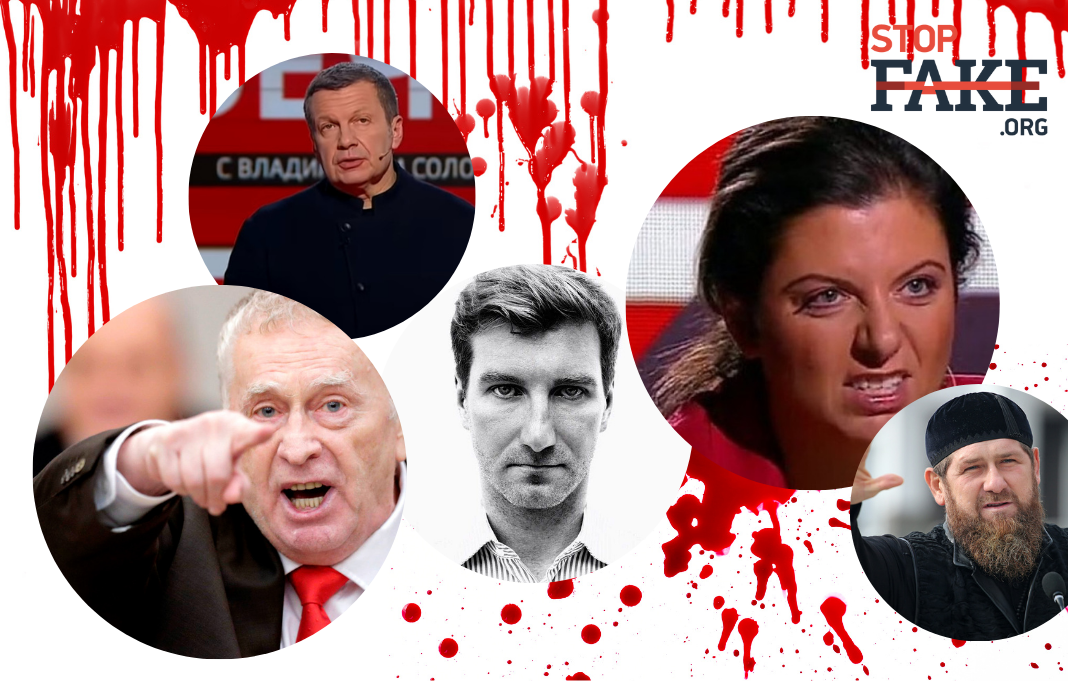 The head of Russia’s Ministry of Foreign Affairs, Sergei Lavrov, has stated: “Russia has never, not ever, nowhere, neither publicly, nor covertly, constituted a threat to the Ukrainian people.”  He said this mere days after the newest in a chain of public threats directed at Ukraine and Ukrainians.   Anton Krasovsky, the director of broadcasting for the Russian state-sponsored tv channel RT, while making an indecent gesture at the camera during the taping of his interview, said that “all Ukrainians should be burned on Khreshchatyk, along with their constitution.”
That is a reality that Russian propagandists created just about on a daily basis over the past eight years.
StopFake analyzed who of the Kremlin’s mouthpieces have recently made the most stringent statements about taking over Ukraine and called the loudest for the genocide of Ukrainians.
It might seem that Anton Krasovsky’s words about Ukrainians crossed all acceptable boundaries.  Russian propagandists, however, have been making like statements for a long time.  While spouting on tv and YouTube channels about a genocide that Ukrainians are allegedly committing in the Donbas, they themselves repeatedly hurled threats against Ukraine and Ukrainians.  For some reason, however, calls to “burn Ukraine,” “destroy Ukrainians,” and “purge the population of Ukraine” have not elicited any real surprise in Russia or beyond its borders and are accepted as something almost normal.

As for emotional pitch, Krasovsky, the one-time resident of Ukraine, still takes a back seat to Vladimir Zhirinovsky, the leader of Russia’s LDPR party, who more than once in his pronouncements burned down, devastated, or blown up Ukraine or even “wiped Ukraine off the face of the earth.”  In his sick imagination Ukrainians are “European trash” and “European manure, which should be made to disappear.” In Zhirinovsky’s opinion, the National Anthem of Ukraine sounds wrong, inasmuch as “Ukraine has already died.”  He also forecast Russia’s invasion, which was to be accompanied by “a purge of the population.”

Earlier, he called for bombing Ukraine during the night before New Year’s, “while the West sleeps.” This same idea featured in his appearance on the talk show of “elite” Russian propagandist Vladimir Solovyov, apropos a Biden-Putin summit, suggesting Russia use it as an element of blackmail in a bid to receive security guarantees from the US.  In the words of the Russian politician, “If Ukraine becomes a danger to Russia, within two hours Ukraine will cease to exist.  All of it, completely.”
Supporting such sentiment, Solovyov himself seldom wasted an opportunity to share his vision of the future of Ukraine and Ukrainians.  During one of his shows he even offered Putin his plan for destroying Ukraine.  Russia, he said, could achieve this by issuing millions of its passports to Ukrainians.

“I believe that we should distribute a minimum of a million and one-half to two million passports annually.  Bring those people here. They should be here.  Forget about Ukraine.  In my opinion, it should be seen exclusively as a reservoir of cadres.”
Russian officials and propagandists hold to a uniform stand on the subject of Ukraine’s sovereignty: Ukraine never existed, and Ukrainians are just a part of the Russian people.  This, by the way, is also the view of the leader of Chechnya, Ramzan Kadyrov.  “Ukraine is our country, our territory,” he said in a recent appearance. “I said a long time ago that after Crimea, we should have taken Kyiv.”
Such a conclusion, in his mind, would seem absolutely logical.  After all, if Chechnya is a part of Russia, what right does Ukraine have to even think about its own independence?”

Among other Russian propagandists who insist that Ukraine must be incorporated into Russia is the married couple Margarita Simonyan and Tigran Keosayan.  In one talk show segment, Simonyan mused: “Russia should take from Ukraine everything it needs and allow Russians who are being held hostage to return home.”   Her narrative about “Russians imprisoned in Ukraine” is, obviously, very convenient for the Kremlin, which, at the first opportunity, thus has carte blanche “to liberate its own population from a Nazi country, where it is being persecuted by Banderites.”

She says nothing about the Ukrainians living in their own country. Nor about the Ukrainians who lived in Crimea but were forced to leave the peninsula when Russia occupied it.  Because of the war Russia engineered in the Donbas, millions of Ukrainians lost their homes.  That, however, is also something Russian propagandists ignore.
On the other hand, Simonyan obsesses over this question: what is more important for Russia –  that Ukraine not join NATO, while keeping forever “lands historically Russian”; or, that “Ukraine be allowed immediately to become a member of NATO, but without the territories that by right belong to Russia.”  The question is framed in a manner that helps Russian audiences come to the right conclusion.   However, in order to make the thrust of the propagandists’ question unmistakable, Tigran Keosayan, in a recent interview, stated: “Russia will soon be in Kyiv, where I’ll be seeing all of my enemies.”
Apparently, there is, in the Kremlin, only one answer to “the Ukrainian question.”