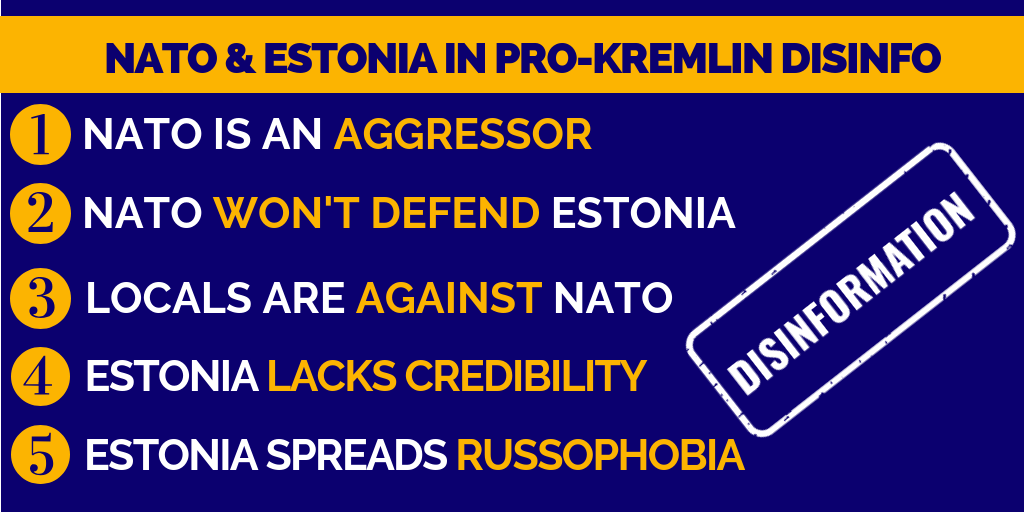 The recent purchase of an anti-tank missile system by Estonia resulted in illogical, threatening and ridiculing narratives by pro-Kremlin media.

The Estonian Defence Forces are caught in the crosshairs of the pro-Kremlin disinformation machine, covered by outlets that are primarily local – for example Sputnik, Baltnews and Rubaltic. In addition to news pieces that typically consist of the defence forces’ press releases equipped with provocative headlines, there are also opinion pieces consisting of heavy criticism on the defence policy of the Baltic states.

One such article in the Estonian language Sputnik  claims that Russia is not a threat, even though it continues to aim at its neighbours with disinformation and ballistic missiles, and encircles them with army bases. The aim of using such illogical logic seems to be that Russia’s neighbours are paranoid about the Russian threat – and, since Russians have a superior military and weapons, it’s pointless to defend your diminutive self.

The text begins with something that could be called hahaganda, claiming that the recently purchased anti-tank missile has “become a favourite toy” and a “symbol of self-calming” for Estonia.

According to the article, buying those missiles is actually pointless because they don’t change the balance in military power (also a link to the Global Firepower list is provided) and instead, the 1.3 million Estonians with a 586 million euro defence budget should buy “tanks, attack aircraft, ships and submarines”.

In addition to ridiculing, the article also seeks to dismay readers by describing that the stockpile of missiles can be damaged due to “errors in storing”, “international terror organizations”, “forest fires” and “real combat”.

And while the text does claim there’s nothing to worry about as there have been no sightings of adversary tanks in the neighbourhood, the following might raise an eyebrow: “During intensive combat, the priority targets for Kalibr and Iskander missiles will be NATO’s command centres and its capacity to perform air raids. GPS navigation and military bases close to Russia will cease to exist, thus rendering anti-tank missiles like Mapats, Milan, Spike and Javelin into useless tools.”

But they go on: “As a response to NATO’s actions near the Russian borders, Moscow created 70 new army bases and units in the Western part of the country.”

The torpedoing of procurement continues with numbers, but sadly they’re just plain wrong. The article claims that the state budget is in deficit by 1.3 billion euros, while in reality the government exceeded the 2018 revenues by 120 million euros. The 586 million budget of the Department of Defence was off by 4 million euros.

Considering those examples, this article fits into the stream of similar texts emitted by pro-Kremlin media. For example: another article in Sputnik ridicules arms procurement by claiming that “Russian tanks will not come to Estonia”. Only to conclude that if a war should happen, anti-tank missiles will be useless and expensive toys.

But what about texts that are defence related, but not focusing on procurement? Well, an article in the Estonian Defence Forces magazine called Sõdur claims that the most common pro-Kremlin defence related narratives are:

– NATO won’t defend Estonia – when this narrative is published in the Western countries, it is heavily exploited by pro-Kremlin media;

– locals are against NATO – citizens are either against NATO troops on the ground or excessive military spending that’s crippling social expenditures;

– Estonia lacks credibility – used when the Global Firepower list is published or there is news about armament procurement that’s covered in ironic terms;

– Russophobia and hysteria – the pro-Kremlin media claims that the Baltic states sow panic about the Russian threat to receive more allied forces that would keep the Baltic economies hit by Russian sanctions afloat.

The aim of the disinformers

The aim of these pro-Kremlin narratives is to sow discord in society and depict Estonia as a failed state that had its “Golden Age” in the Soviet Union. The reason for publishing on minor web-based disinformation sites is likely to provide articles that can be “laundered” on larger pro-Kremlin sites and guarantee an auditorium for pro-Kremlin activists who can be used as interviewees for Russian TV stations.

But do these tiny web-based pro-Kremlin outlets actually have any quality content to share? Well, they do reach certain heights, sometimes even poetic: “The unfillable war-machine has chosen a tiny spot of land called Estonia and is spreading there like poisonous mould. It contaminates water and land. It blurs the vision of politicians and thoughs of citizens who like brave men in uniforms. People with extra strong imagination can even hear the sound of freedom in the noise of fighter aircraft. (….) It’s so simple – those thousands of rifles will not be needed in a global military conflict. They will be trapped under the debris of the storage facilities destroyed by rockets. Our soldiers will have no one to shoot at, or if, then at themselves, out of hopelessness and the sudden realisation that the enemy is out of reach.”

As a conclusion it should be noted that Estonia is not alone in the crosshairs of the pro-Kremlin disinformation machine. In 2017 an article was published about Finnish military using tunnels and the pro-Kremlin reaction went ballistic by diagnosing “anti-Russian psychosis” and claiming that Russian bunker busters would reach Finns underground. But the crème de la crème has to be the idea to turn not only one city, but the whole country into dust with ballistic missiles.

On the other hand it’s hardly surprising, as an article from 2016 argues that it’s very unlikely a war between NATO and Russia would happen, but if it does, the reason will be provocations by the satellites of the US and the result will be “short” and “nuclear”.