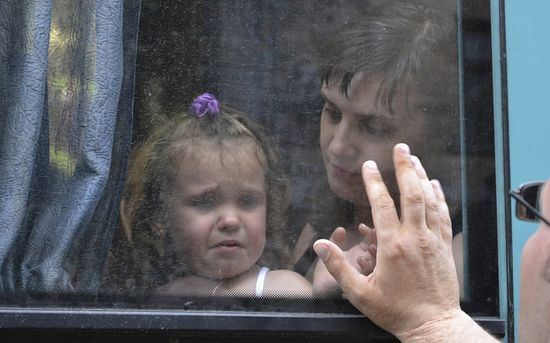 Ukrainian journalist Oleksandr Piddubny made an investigation about a “trip” of one photo under different titles across the information field. He published the results in his blog. With Oleksandr’s permission we translated his article.

Since June 10 mass media have been using actively the same photo of a girl, evacuated from Sloviansk by Ukrainian authorities on June 6, 2014, as an illustration for different news. For the first time the picture by Andrey Petrov from Associated Press appeared in Los Angeles Times on June 10 illustrating an article about Petro Poroshenko’s order to evacuate children from Sloviansk.

The same day, June 10, this photo appeared on Serbian site Politika illustrating completely opposite information: “The Chairman of the Presidium of Supreme Soviet of the Donetsk self-proclaimed People’s Republic Denis Pushilin infromed ITAR-TASS that about 15 thousand refugees had crossed the border between Ukraine and Russia. They are mainly women and children from the area of military operations on the east of Ukraine”.

June 13 on the site Pravda.RU the photo of this child was accompanied with the news “Deshchytsia demands from Lavrov that Russia bring back orphan children taken out from under bombardments”. The key-note of the news is the following: “citizen soldiers” saved children from under “Ukrainian army bombardments”, the Ukrainian government itself is not going to save children. No confirmation, no proofs, no links, just one photo of a little girl.

On the same page (in the top left corner) this photo is with a caption “There is a humanitarian disaster in Novorossiya”.

The picture of evacuated girl makes Pravda.RU restless. June 18 this photo is captioned with the news “Novorossiya residents will be put to internment camps” concerning words of Acting Ministry of Defence Koval about the necessity of filtration camps in order to find terrorists. But Pravda.RU wrote that it would be total repressions, almost cleansing, and children would not be envied.

June 21 the same Pravda.RU illustrated with this photo the news about Ukrainian army having fired at the bus with children near the border with Russia. The news was based on the twit of Russian Children Ombudsman Pavel Astakhov. Though, somehow the world community has never learned any details of this firing.

July 1 the picture of a little girl was used as an illustration on the other site – CrisisUA.Net.

July 2 Pravda.RU published this photo with the English news “At least 500 Ukrainian refugees flee to Crimea daily”. The source of the news is so-called Chairman of the State Council of the Crimea Konstantinov, who worries about refugee fate and heroically promises to shelter all of them.

After the weekly pause on July 9 the site Pravoslavie.RU published the famous photo entitling the news “Metropolitan Mercurius of Rostov: The church is doing its best to help the refugees”. The alarming news of Russian clergymen tells about an emergency state because of “Ukrainian refugees” in Rostov Oblast. And the Church is doing its best to support the arriving people, to help free them of their “stupor and fear”. Apparently, the photo of a little girl, taken away by Ukrainian authorities from pro-Russian terrorist, should have illustrated this “stupor and fear”.

It should be also noted that there is a Serbian version of Pravoslavie.RU. And, as we can see from the beginning of this investigation, it was the Serbian site Politika that threw the photo of a girl on the anti-Ukrainian propaganda fan for the first time.

July 10 the picture was again published as an illustration to the next news of Pravda.RU about the Liberal Democratic Party of Russia (led by famous politician Vladimir Zhirinovsky) proposing to install cameras in order to fix how refugees would move from Ukraine to Russia.