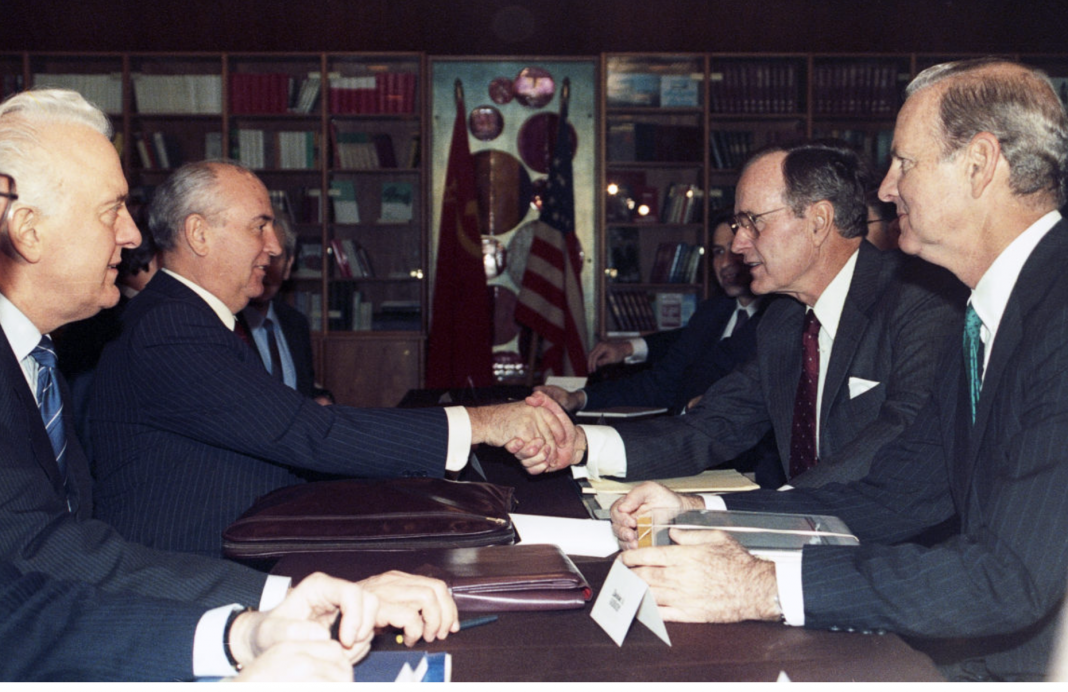 Against the backdrop of a Russian troop buildup on the Ukrainian border, the Kremlin has made it very clear to the world that it does not want any NATO expansion. On December 8, 2020, Russian President Vladimir Putin declared that the expansion of the Alliance to the East, including Ukraine, is a “very sensitive issue for Russia’s security”. Putin then went on to issue demands to the US and NATO that the Alliance halt admission of new members and provide Russia with security guarantees. Putin went on to say that NATO blatantly deceived Russia when they promised not to expand eastward in the 1990s.

Did NATO really promise Russia that it would not allow former East Block countries to join? With the help of M.E. Sarotte’s definitive book on NATO expansion after the fall of the USSR, let’s try to get to the bottom of this alleged promise.

During his annual press conference on December 23, 2021, Vladimir Putin directly accused NATO of lying. According to him, the Alliance blatantly deceived Russia in that in the 1990s it had promised not to expand to the east.

“Not an inch to the east,” we were told in the 1990s. So what? They lied. They blatantly deceived us. Five waves of NATO expansion. And now if you please, in Romania, and in Poland defensive systems are appearing,” Putin said.

The Russian president did not specify where such a NATO promise was recorded. He knows perfectly well that such a promise is not written in any document or agreement. In a 2021 interview with NBC Putin again spoke about NATO’s alleged deception regarding expansion. When asked where such a NATO promise was recorded, Putin responded: “Well done! That’s right, they took advantage, and we were had. It is necessary to record everything on paper” (watch from the 50th minute).

The President of Russia is well aware that such a promise is not enshrined in any document, but he still continues to claim that “we were promised.” It is noteworthy that in the NBC interview, Putin says that confirmation of the “oral agreement” can be obtained from former Soviet leader Mikhail Gorbachev, who is “alive and healthy”. The German broadcaster  ZDF incidentally asked him about the alleged “promise” back in 2014, and he said that it was a myth. But more on that later.

History of the “promise”

Vladimir Putin was not the first to come up with the “broken NATO promise” narrative. The history of this myth dates back to the February 9-10, 1996 negotiations, in Helsinki. Then, Russian Foreign Minister Yevgeny Primakov and US Secretary of State Warren Christopher decided to meet on neutral territory to mainly discuss foreign policy. Primakov began to “attack” the idea of ​​NATO expansion. The Russian diplomat began to assert that in 1990, during the signing of the “Two plus four” treaty (Treaty on the final settlement for the unification of Germany), a promise was made “to prohibit countries from east of Germany to join the Alliance” (Sarotte ME Not One Inch. America, Russia, and the Making of Post-Cold War Stalemate. – Yale.: 2021. – P. 251).

Russian Foreign Minister Primakov referred to former US Secretary of State James Baker. On February 9, 1990, Baker discussed the possibility of East Germany joining NATO: “Would you prefer to see a united Germany outside NATO, independent and without US military troops, or would you prefer a united Germany linked to NATO with guarantees that NATO will not move an inch to the east from its current position?” Gorbachev replied that no expansion of the NATO zone would be acceptable. And according to Gorbachev, Baker allegedly replied “We agree to that.” This conversation gave rise to an entire Kremlin myth about the NATO “promise”. (Sarotte ME Not One Inch. America, Russia, and the Making of Post-Cold War Stalemate. – Yale.: 2021. – P. 55).

In his interview with ZDF Gorbachev does not interpret the conversation of 1990 “as a NATO promise not to expand.” Moreover, Gorbachev believes that at that time the question was not raised in that way at all, and no guarantees were required. If this issue was not raised, this means that he could not get a positive answer.

Back in 1996, Yevgeny Primakov claims aroused great interest in Washington. The US State Department even initiated a study on this topic to find out what was promised to Gorbachev and what was not. This mission then fell on the shoulders of the acting coordinator for the former Soviet republics, John Herbst (later the US Ambassador to Ukraine) and Assistant Secretary of State for European and Canadian Affairs, John Kornblum. As proof that Russian claims about a no NATO expansion promise were wrong, they cite the discrepancy between the oral negotiations in 1990 and their more “limited written results” (Sarotte ME Not One Inch. America, Russia, and the Making of Post-Cold War Stalemate. – Yale.: 2021. P. 252-253).

Ukraine could have been in NATO long ago

Immediately after the collapse of the Soviet Union, the question of whether or not to expand NATO did not depend on Russia’s wants. The process of accepting new members into the Alliance, including Ukraine, rather depended on the general geopolitical situation. In the 1990s NATO expansion was a priority during the presidency of George H.W. Bush and his successor Bill Clinton. (Sarotte M.E. Not One Inch. America, Russia, and the Making of Post-Cold War Stalemate. – Yale .: 2021. P. 242-243, p. 185). Both presidents’ teams were divided into those who advocated NATO expansion – for example Dick Cheney, Alexander Vershbow, Daniel Fried, Richard Holbrook, and those who advised to be careful, such as Ashton Carter and William Perry.

Both US presidents faced the choice of either bringing Central and Eastern Europe, including the Baltic states and Ukraine closer to NATO, or promoting cooperation with the fragile new Russian democracy, especially in the interests of nuclear disarmament (Sarotte ME Not One Inch. America, Russia, and the Making of Post-Cold War Stalemate. – Yale.: 2021. – P. 4). Ukraine’s nuclear legacy worried both presidents and often played an important role in the issue of expansion/non-expansion of the Alliance. Both Bush and Clinton tried to settle this issue. But in the end, those who professed the Russia first policy and “advised to be careful” with NATO expansion won the day.

Russian President Vladimir Putin is cunning and manipulative, appealing to the promise “not one inch to the east”. Taken out of context, the phrase has nothing to do with factual or legal promises. The issue of NATO expansion, including Ukraine, was actively discussed in the 1990s without much resistance from Russia, even the idea of Russia itself joining the Alliance was considered, with Borys Yeltsin, his Foreign Minister Andrey Kozyrev and certain US and European politicians vigorously advocating the idea. The main issue worrying Moscow in the 1990s was getting more economic assistance from the US and Germany, without which Russia hardly would have survived. But such details are quickly forgotten.