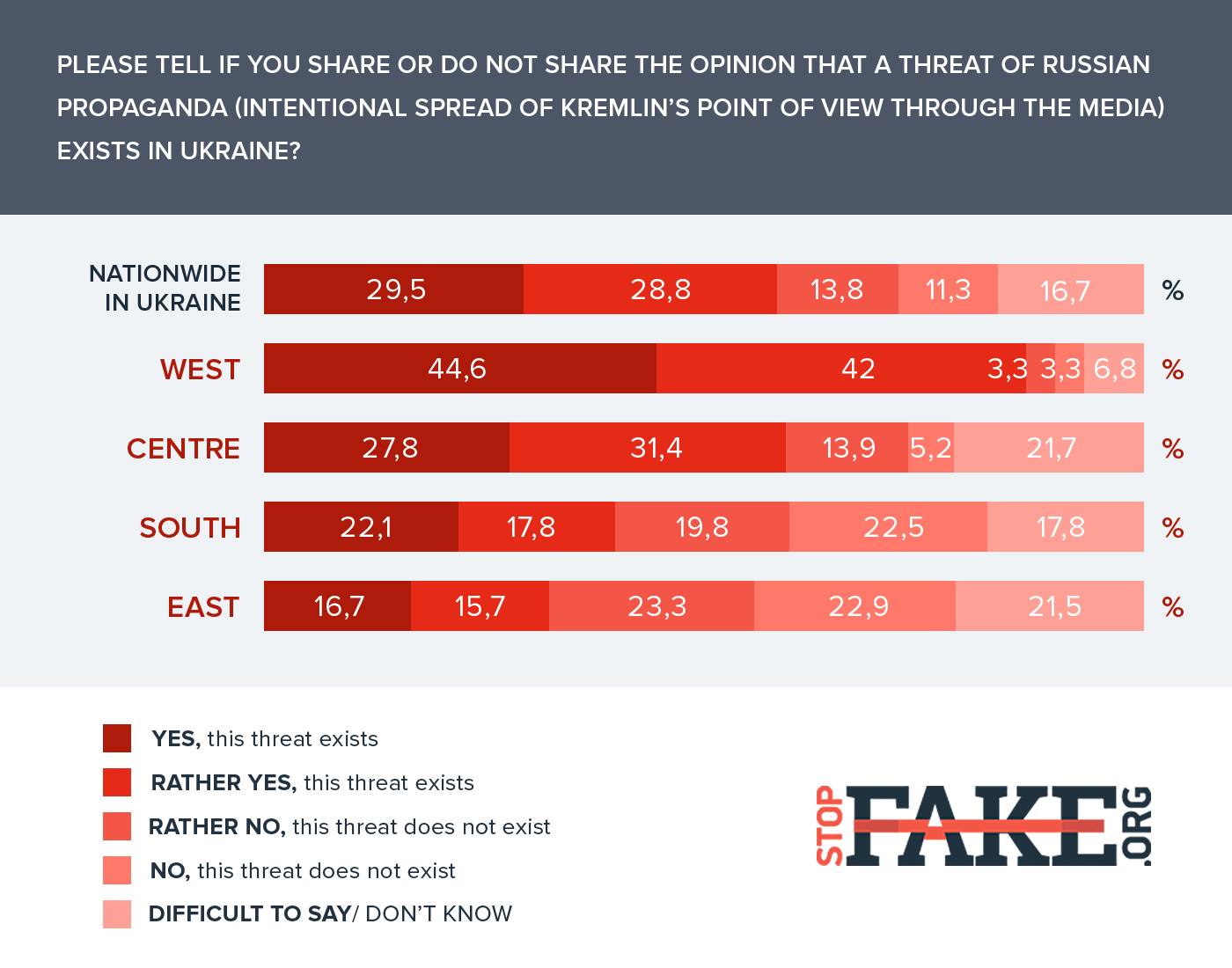 The proliferation of discourse about propaganda and fake news from predominantly professional debates to the popular information space, has generally increased awareness about the problem among Ukrainian citizens; yet, it has also brought some fatigue. ‘Propaganda’ and ‘fake news’ tend to be perceived as buzzwords, which are often bereft of meaning for people as they don’t largely resonate with their major daily life concerns. At the same time, analysis of available research suggests that there is a group of people – mostly young – who are eager to get relevant training, improve their knowledge of information manipulation techniques and potentially disseminate that knowledge among their reference groups. This means that there is a need for different approaches to communicating problems of disinformation and fake news to different segments of society.

Such conclusions can be drawn from several recent studies (e.g.[1][2][3][4][5][6]) that explored media consumption patterns and analyzed citizens’ awareness and attitudes to the problems of propaganda and fake news, including the most recent one conducted by StopFake. The views of the Donbas region residents have particularly been in the focus of researchers due to the vulnerability of the region with regard to Russian propaganda and disinformation.

As part of project’s research track, StopFake has conducted two waves of study aimed at examining Ukrainian citizens’ awareness and attitudes to the problem of disinformation and propaganda in the media. In 2017, the study consisted of two parts, a representative nationwide opinion poll and two focus group discussions in the Donetsk region. In 2018, the qualitative part was expanded to four focus groups. Polling was not conducted given a quite wide array of relevant survey data available from other sources.

The focus groups were conducted in the Donetsk region (the cities of Kramatorsk and Bakhmut) and Luhansk region (the cities of Lysychansk and Severodonetsk). In total, 32 respondents participated in the discussions, 50/50 men and women, aged 18-65, of various educational levels, various professions and employment status. Respondents were asked a set of questions about their media consumption habits, trust to various sources, awareness of such issues as propaganda, disinformation and fake news and their attitudes to the discussed problems.

The major findings of the second wave of focus groups include the following:

Analysis of the findings of both waves of study, as well as survey data published by other organizations, allows identifying continuity and changes in the patterns of public awareness and attitudes towards disinformation and propaganda among Ukrainian citizens and Donbas residents in particular.

Available research findings, which allow for making observations about the dynamics of Ukrainian citizens’ awareness and attitudes to the problems of propaganda and fake news suggest the need to tailor specific approaches for different segments of society. Accordingly, the group of active media consumers would benefit from advanced training on the tools to deal with disinformation and manipulations, as well as broader education about the contemporary mediascape, both global and local. Given their general leadership potential, they could also be encouraged to come up with local initiatives targeting their specific communities. The broader audience, instead, needs more accessible and simple formats communicating problems of disinformation and fake news. Furthermore, the broader audience has to be exposed to information that not only stimulates mistrust and caution by default, but also contributes to the confidence in credibility. For example, indicators of trustworthy information and media could be helpful, along with already circulating indicators of possible misinformation. In a similar vein, specific approaches should be developed for various stakeholders that can be targeted by propaganda and disinformation efforts.

Given the dynamic nature of present-day pubic space, further research into citizens’ attitudes and perceptions of propaganda and disinformation in media, as well as their daily media consumption routines, could not only help to track the developments but also elaborate policy recommendations to respond to the new challenges.