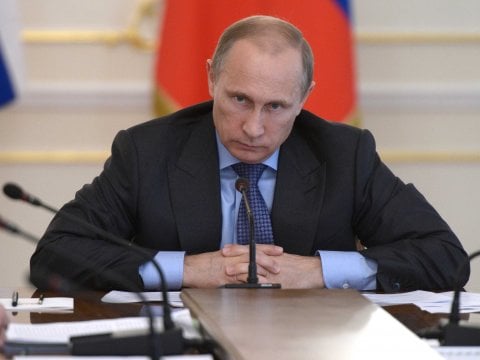 It pays to remember that Syria’s intelligence, and most of its political elite, were trained in the Soviet Union, and post-Soviet Russia — and not just in how to torture and kill people.

The IQ, consistency and logical cohesion of state-relayed propaganda in Damascus owes a great deal to prior tutelage in Moscow, as the latest developments in the Ukraine crisis have nicely demonstrated.

We have heard innumerable explanations from official Russian sources for how 298 people were blown out of European skies on July 17. None of them are so simple as the truth: Russian-backed separatists, using Russian-provided anti-aircraft batteries, shot Malaysia Airlines Flight MH17 down, believing it to be a Ukrainian military cargo plane.

The most imaginative of the counter-narratives came from RT, the Kremlin-owned propoganda channel, which is now under investigation by Britain’s media regulatory body Ofcom for failing to abide by basic journalistic standards. RT alleged that Kiev was in fact responsible for accidentally blowing up MH17 – while trying to hit Putin’s presidential plane.

Putin’s jet is a well-guarded conveyance which, RT belatedly had to admit, was not passing through the airspace of the “People’s Republic of Donetsk” on July 17, much less within collateral striking distance of MH17’s own flight path.

In fact, it hadn’t flown through any Ukrainian airspace “for a while.” But no matter. What would stop the “fascist junta” in Kiev, abetted by NATO and the CIA, from assassinating the heroic defender of the Motherland, wherever he is or is not?

RT’s spitballing was followed by the Kremlin’s more elaborate non-thesis.

The set-up included wrap-around images of flight trajectories and satellite photos — everything needed to bury the truth under a deluge of nonsense. Two Ukrainian fighter jets, “probably” Su-25s, were the culprits, they said. One was used to shoot down the commercial airliner in mid-air and the other to surveil the wreckage.

It was of no apparent consequence to Russia’s top martial brass that Su-25s are ground assault aircrafts, incapable of carrying a rocket payload big enough to do the damage done to MH17. It didn’t matter to their chosen narrative that these jet fighters have an altitude ceiling of 23,000 feet, above which they can climb for short periods of time, although not long enough to track a Boeing 777 cruising at 33,000 feet.

Also absent from the Russian general staff’s accounting was any crucial context. Su-25s that have entered separatist-controlled airspace, both before and after the MH17 incident, have been shot down by separatists. Yet somehow two lucky examples managed to enter that airspace, destroy a jumbo jet, then “hover” over or “patrol” around the remains of it to ensure it had indeed been destroyed, and then quit scene of the crime, unharmed.

These claims, falsifiable with Wikipedia — much less a phone call to aviation experts — were still an improvement on what Russia’s state TV Channel One did about a week after the separatists abandoned their original stronghold of Slavyansk to conquering Ukrainian forces.

On July 12, the state broadcaster interviewed a woman who claimed to be a refugee named “Galina Pyshnyak.” Relying on nothing other than her ostensible eyewitness testimony, Channel One led millions of Russian to believe what was happening right next door was out of the Bronze Age:

They took a child, a 3-year-old boy, a little one, in shorts and a t-shirt. And like Jesus, they nailed him, one nailed him, two held him down. All of this in front of the mother. The mother was held, and watched. Blood flowed from the child, there were cries and screams, they took him like this, and cut him. The shock of the child was impossible. People fainted. Then after they tortured the child for an hour and a half and he died, where this was all happening, and then they took the mother, tied her to a tank, unconscious, and dragged her around the square. They made three circles. A circle around the square is a kilometer.

Presumably, the crucifixion of toddlers is not an everyday occurrence in Slavyansk, and so there’d have been others to corroborate this gruesome spectacle.

Yet real journalists from Novaya Gazeta, one of the few independent newspapers still left in Russia, traveled to the city, interviewed locals, and discovered what you’ve already guessed: no such act of barbarism ever took place.

Moreover, there is no Lenin Square in Slavyansk; there is a statue of Lenin in what is known as October Revolution Square. Also inexplicable was how Pyshnyak knew the exact age of the cross-hammered child, but could not give his name.

Her made-up story also bore a striking similarity to another told by a man claiming to be Alexei Smirnov, a curiously popular name for pro-separatists on social media platforms in Russia and Ukraine. Ukrainian video blogger Anatoly Shariy noticed that a few days before the Channel One broadcast, Smirnov posted the following to his Facebook page: “Yesterday, the National Guard nailed a little child to a board and he hung there until his father, a militiaman, came out, then they shot him dead.”

Alexander Dugin, the Russian ultranationalist philosopher who has demanded that Putin invade and annex east Ukraine, also advanced this rumored atrocity, only in his version the crucified child was six, not three.

But Moscow’s inventiveness in erasing its own complicity in the MH17 tragedy still doesn’t come close to how Russian Foreign Ministry spokesperson Aleksandr Lukashevich tried to argue a year ago that the Assad regime could not have been guilty of deploying sarin gas in Ghouta. His evidence?

A video of that war crime that had been posted to YouTube on “August 20,” seemingly a full day before the event had taken place.

Yet as my colleague James Miller explained, Lukashevich didn’t bother to investigate the 10-hour time difference that exists between Damascus and California, which is the time zone YouTube uses to date all of its videos.

The Foreign Ministry flack’s supposed gotcha was subsequently cited by RT and Voice of Russia as proof that Assad’s war crime was all an elaborate hoax, which it may have been if the earth had suddenly stopped revolving around the sun. Syria’s apprenticeship at the feet of Russia now seems obvious.

The first car bombing of the revolution was in the Kafarsouseh district of Damascus in late December 2011, and was either carried out or facilitated by the regime as a way of reifying its propaganda about its fight against “terrorists,” not peaceful protestors.

But consider how Syrian state media covered this car bombing within minutes of its occurrence. As Hanin Ghaddar, the managing editor of NOW, screen-captured at the time, the female anchor on Addounia was able to report with a straight face the “arrest of the terrorists who blew themselves up today.”

That same anchor earlier explained in late April 2011: “To expose the truth about what was really going on in al-Maidan we reported in our news ticker that the people of Maidan were actually praising the Lord for the heavy rain but al-Jazeera kept broadcasting images of what it claimed was a protest in al-Maidan.”

Weather seemed to be a particular obsession of the Syrian propagandists. Al-Arabiya, for instance, was accused of sending coded messages to protestors via its own weather forecasts. Except that there were no protests in Syria, only stage-plays recorded on Qatari sound stages.

Just as memorable was the regime’s response to the sudden migration of 10,000 villagers from Jisr al-Shughour, the site of one of the worst of the early massacres of protestors, in June 2011. This time, the English-speaking Reem Hadad went on the BBC to explain that Turkey’s unexpected refugee influx was really history’s single largest spontaneous outbreak of family reunions.

“A lot of them find it easy to move across because their relatives are there,” Haddad said. “It’s a bit like having a problem in your street, and your mum lives in the next street, so you go and visit your mum for a bit.”

The “Unluckiest Man In Syria”

At times, it has seemed as if the Russian tutor had become the pupil.

Consider the unluckiest man in Syria, the “innocent bystander” who was interviewed on regime or international television a dozen and a half times, immediately following some “terrorist” attack.

“We the Syrian people,” he is quoted as saying in February 2013, “place the blame on the Nusra Front, the takfiri oppressors and armed Wahhabi terrorists from Saudi Arabia that are armed and trained in Turkey.” Except that he has elsewhere appeared at a pro-Assad rally, and in military uniform on BBC Arabic. No matter where he went, there he was, the Buckaroo Banzai of the regime thugs.

Now meet “Mariya,” Our Lady of Perpetual Sorrows in Ukraine.

She has claimed to have heard rumors about “fascist” Ukrainian attacks against ethnic Russians in Odessa. But she never stays in one place. She’s appeared on multiple television stations under the guise of multiple identities including, but probably not limited to, “a soldier’s mother, a Kiev resident for a clean Kiev, and an anti-Maiden activist;” the mother of a victim of a notorious fire in Odessa, and as the owner of a roadside cafe in Stanitsa Luganskaya.

Eat your heart out, Meryl Streep.

They persist in a lie even in the face of evidence to the contrary. They are not embarrassed to be caught in a lie.

While lower level officials often lie to avoid potential punitive action from their own government, senior level officials generally lie when they deem a topic too ‘dangerous’ to discuss (e.g., Al-Kibar, IAEA) or when they have not yet determined whether or how to respond (FFN, Hezbollah arms supplies, etc). When a senior [Syrian] official is lying, the key challenge is not demonstrating the lack of veracity but discovering the true reasons for it.

The purpose of propaganda isn’t to convince you that a lie is true; it’s to preoccupy you with debating or debunking the lie, the better to keep the truth hidden. Conspiracy theories, which proliferate even under the most democratic of circumstances, metastasize when undemocratic regimes offer the slightest encouragement — and they always do.

But what Putin and Assad understand is that even respectable sources of information, such as mainstream Western news organizations, are duty-bound to relay “both sides of the story,” however superficially absurd one side may be.

In this way do CNN, the BBC and The New York Times get conscripted as unwitting agents of influence in the dissemination of all manner of nonsense about the origins of protest movements, chemical weapons attacks, or murder of civilians aboard commercial airliners.

Translated in English by www.businessinsider.com.