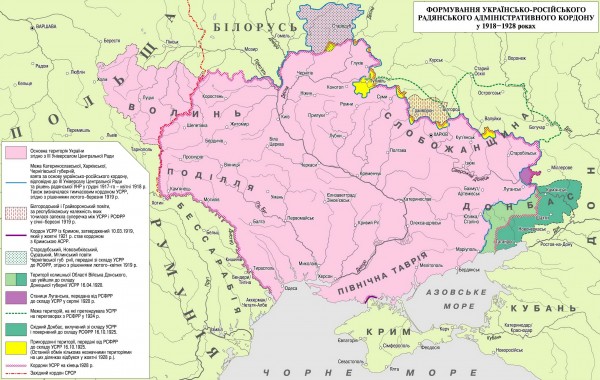 Andrei Illarionov, an ex-adviser of Vladimir Putin, in his LiveJournal, denied with historical facts Vladimir Putin’s statement about the so-called “Novorussia”, made ​​during the responses to the questions after the “Valdai speech.”

We checked the accuracy of the facts mentioned by Andrei Illarionov, and decided to publish them on Stopfake.org.

The first thing that attracted Illarionov’s attention in the Valdai speech of the Russian Federation President was the statement about the transfer of lands from Russia to Ukraine (which he called “Novorussia”) in the 1921-22’s. Instead of it, Illarionov insists that “during this years Russian-Ukrainian border stayed unaltered.” This is only half true.

On March 18, 1921, a peace treaty was signed in Riga, which put an end to the Soviet-Polish War (1918-1921). According to the agreement, the Polish Republic and the Russian SSR (and Ukrainian SSR) signed the agreement about the border between the countries. In fact, the border line has changed. Territories, that had been part of the Russian Empire in 1795-1916, went to Poland. Belarus and Ukraine have been divided between Poland and the USSR. Ukrainian SSR did not include new territories. Here is a map of the boundaries after the Riga treaty. More details about the myths about the land transfer to Ukraine made by Bolsheviks.

Moreover, the Crimea, which had previously been part Tavria province, October 18, 1921 granted the status of an Autonomous Soviet Socialist Republic, and moved into the RSFSR.

The next text belongs to Andrei Illarionov and is published unchanged.

Putin: In general, these lands were always historically called lands Novorossiya. Why? Because it was essentially a region centered in Novorossiysk, so the name was Novorossiya.

Facts: These allegations are not true. I have already drawn the attention to it. We have to return to this question again.

The term “Novorossiya ” was used not “always”, but a little more than a century – from the 60s of the 18th century to the 70s of the 19th century, then fell out of use and for the next nearly half a century was almost unused.

In history there are four administrative-territorial formations, which has “Novorussia” in the title: Facts: Kharkiv was never a part of any administrative unit, in the name of which would be present, the term “Novorossiya”. The population of the territory of modern Kharkiv live continuously from 1630, when the Dnieper Ukrainian Cossacks settled there. Ukrainian historical area with Kharkiv in its center has a name Sloboda. In the Russian Empire Kharkiv was the provincial center of Slobodskaya province (1765-1780 yy.), Sloboda-Ukrainian province (1796-1835 yy.), and then – Kharkiv province.

Neither in the Russian Empire nor in the Soviet Union before 1932 it was not such administrative formation as the Odesa province. In 1921-22. Odesa and surrounding areas were parts of the Kherson province.

Putin: These lands were in the 20s, in the 21-22-th years, during the establishment of the Soviet Union, transferred from the Russia to Ukraine.

Facts: This statement is false. USSR was created in December 30, 1922. With its creation, as well as in 1921-22. no territories were passed from Russia to Ukraine.

Formation of the modern Russian-Ukrainian border happened a little differently.

– November 7, 1917, by its Third Universal, Ukrainian Central Rada the proclaimed the formation of the Ukrainian National Republic (UNR) within the boundaries of the nine provinces of the Russian Empire, with a predominantly Ukrainian population:

“To the territory of the Ukrainian National Republic should be attributed territories, populated mainly by Ukrainians: Kyiv region, Podolia, Volhynia, Chernigov, Poltava, Kharkiv, Ekaterinoslav, Kherson, Tauride (without Crimea) regions. The final determination of Ukrainian National Republic boundaries, concerning the accession of parts of Kurschina, Holmschina, Voronezh region and neighboring provinces and regions where the majority of the population are Ukrainian should be installed with the consent of the organized will of the people. ” – According to the agreement of June 12, 1918 RSFSR accepted the Ukrainian state in its borders.

– According to the agreement of March 10, 1919 UNR transferred to RSFSR:

a) part of the Crimean Tauride province (Crimean Peninsula);

– April 16, 1920 in a decree of the Central Executive Committee, SNK RSFSR and VUTSVK “On the Establishement of Donetsk province” RSFSR gave Ukraine some territories of Don Army Region:

– In August 1920, the RSFSR passed the Lugansk village to USSR.

– December 28, 1920, an agreement on cooperation in military and economic activities that do not involve issues of borders was signed between the RSFSR and the USSR.

– December 30, 1922 the Treaty on the Creation of the USSR was signed, which also does not address issues of borders between member republics.

Ukraine transferred to the RSFSR:

a) the city of Taganrog, Fedorov, Nikolaev, Matveyev-Kurgan, Sovetinsky, Golodaevsky areas and the eastern part Yekaterinovsky District of Taganrog province;

b) Znoba settlement in Trubchevsk parish of Pochepsky County in Bryansk province;

g) The southern part of the parish of Belgorod and Murom districts of Kursk Province;

h) Troitskaya parish, and part of the Urazovskoy parish of Valuisky County in Voronezh province.

– October 16, 1928 by the Resolution of the Presidium of the USSR Central Executive Committee exchange between the territories of the USSR and the RSFSR was conducted.

RSFSR give to USSR:

b) Staritsa, Prilipko and Ogurtsovo settlements in Murom parish of Belgorod district in Kursk Province; – December 8, 1991 in the Agreement on the Establishment of the Commonwealth of Independent States, Russia and Ukraine recognizes the territorial integrity of each other and the inviolability of their existing borders.

– January 14, 1994, in Budapest Memorandum Russia pledged to respect the independence, sovereignty and the existing borders of Ukraine, and also reaffirmed its commitment to refrain from the threat or use of force against the territorial integrity or political independence of Ukraine. Russia also made ​​a commitment that none of its weapons will ever be used against Ukraine, except in self-defense or in any other manner in accordance with the Charter of the United Nations.

– May 30, 1997, by the Treaty of Friendship, Cooperation and Partnership Russian Federation in accordance with the provisions of the UN Charter and the obligations under the Final Act of the Conference on Security and Cooperation in Europe obliged to respect the territorial integrity of Ukraine and confirmed the inviolability of existing between Russia and Ukraine borders.

Putin: The communists’ wording was simple – just to raise the percentage of the proletariat in Ukraine.

Fact: This statement is not true. The structure of Ukraine entered the province with a predominantly Ukrainian population regardless of their social composition.

Ukrainian province in 1914 and the modern Ukrainian border Population by mother language of Ukrainian provinces in 1897

Source: The first general census of the population of the Russian Empire in 1897.

Putin: At that time was done in violation even of the Soviet law, and I say, what was the violation. By the regulations,prevailingat that time,in accordance to laws of the Soviet Union to pass the territory from one Republic to another, the decisions of the Supreme Council of both republics were necessary. This was not done, and what was done? It was stamped by the Presidium of the Supreme Soviet of the RSFSR and the Ukraine, not the parliament itself, but only the presidium. It was rough, a clear violation of the rules …

Facts: These allegations are not true. Neither the Constitution of the USSR in 1936 (including a version of the then 8 August 1953), nor RSFSR and the USSR Constitutions from 1937 did not require such decisions of the Supreme Council to change the boundaries between Union Republics.

c) submit for approval by the Supreme Soviet of the USSR formation of new territories and regions, as well as the new autonomous republics and provinces of the RSFSR;

d) approval of the borders and dividing the autonomous Soviet socialist republics and autonomous regions;

In other words, in the jurisdiction of the republic only questions of changing the borders of the autonomous republics, autonomous regions, and the boundaries of the district division of territories and regions.

As for the authority to change the boundaries between Union republics, they, according to the Constitution of the USSR, 1936, relate to the jurisdiction of the USSR:

d) approval of changes in the boundaries between Union Republics;

The most important decision was taken in the form of the Law, approved by the USSR Supreme Soviet.

The Supreme Council of the Union of Soviet Socialist Republics agrees:

2. Make the appropriate changes to articles 22 and 23 of the Constitution of the USSR.

Chairman of the Presidium

The Supreme Soviet of the USSR

secretary of the Presidium

The Supreme Soviet of the USSR

Decree of the Presidium of the Supreme Soviet on October 12, 1943 “On the Elimination of Karachay Autonomous Oblast and the administrative structure of its territory.”

Decree of the Presidium of the Supreme Soviet on 20 April 1956 “On the Partial Amendment to the border between the Kazakh SSR and the RSFSR.”

Facts: First, by this commentary Putin de facto confirmed the authenticity of the earlier Sikorski statements about Putin discussion with several foreign leaders questions about accessory parts of the territory of Ukraine to neighboring states.

Secondly, Carpathian Ruthenia, which became the Transcarpathian region of the Ukrainian SSR in 1920-38 years. was part of Czechoslovakia. Its occupation and annexation in 1939-44 years by Hungary, an ally of Nazi Germany was not recognized in any of the area, nor the anti-Hitler coalition. Putin’s mention of Hungary as a former owner of Ukrainian territory, not Czechoslovakia, said a lot about the nature and direction of Kremlin leader’s thinking.

Thirdly, with regard to the city of Lviv, it was founded by Grand Prince of Galicia Daniel Romanovich in 1256 and was named in honor of his son Lev. Lviv became Polish almost a century later, in 1349, when it was occupied by the troops of the Polish king Casimir. Throughout its history, Lviv was under Polish, Austrian, Russian authorities. At the time of the occupation of the city by the Red Army in the autumn of 1939 the city’s population consisted mostly of Poles, Jews and Ukrainians.