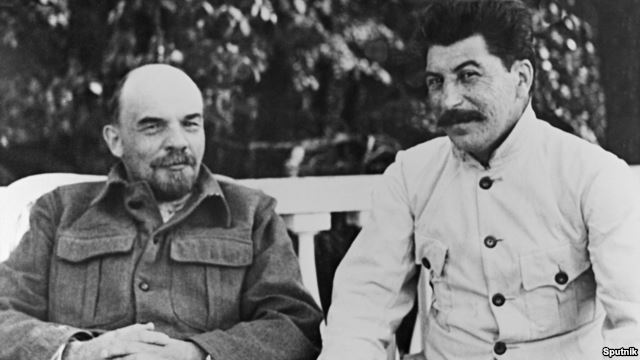 Russian President Vladimir Putin often accuses the West of distorting history. But in his latest comments about Soviet founder Vladimir Lenin and his successor, Josef Stalin, Putin’s penchant for shaping history to suit his goals was on stark display, Merhat Sharipzhan wrote for RFE/RL.

Speaking to pro-Kremlin activists in the southern city of Stavropol on January 25, Putin — for the second time in a week — accused Lenin of setting a time bomb that blew the Soviet Union apart in 1991. He also seemed to conflate Russia with the entire U.S.S.R., saying:“They placed an atom bomb under the building called Russia, and it later exploded.”

The bomb, Putin said, was Lenin’s concept of the Soviet Union as a federative state, with each of its republics having the right to secede. He said Lenin was on the wrong side of a dispute with Stalin, who he said opposed giving the largely ethnic-based republics that right.

According to Putin, Lenin’s concept was one of the major causes of the Soviet collapse.

Putin’s remarks were striking because the former Soviet KGB officer has been known to be very cautious when talking about Lenin, whose embalmed corpse still lies in a mausoleum on Red Square 92 years after his death — and who is still revered by millions across Russia.

Putin’s attempt to portray Stalin as a wiser leader — one who opposed the republics’ right to part with the U.S.S.R. — is badly undermined by a look at the dictator’s record on the issue.

The first Soviet Constitution, adopted by the Second Congress of Soviets on January 31, 1924 — 10 days after Lenin’s death — enshrined as law the 1922 Treaty on Creation of the Soviet Union.

In 1936, when Stalin’s autocratic power was at its peak and his Great Terror purge campaign in full swing, the Soviet Union adopted a new constitution that changed the legal status for Central Asian ethnic autonomous republics within the Russian Federation, which are currently Kazakhstan, Kyrgyzstan, Tajikistan, Turkmenistan, and Uzbekistan, and turned the Trans-Caucasus Federation into three separate republics, Azerbaijan, Armenia, and Georgia.

The number of the republics with so-called union status within the U.S.S.R. was increased from four to 11 by Stalin. In other words, at a time when Stalin could potentially have used his power to strip Soviet republics of the right to secede, he instead extended that right to a total of 11 republics rather than four.

If Stalin indeed opposed the right of ethnic republics to secede from the Soviet Union, he had more than enough clout to change the Constitution in the opposite direction, turning the U.S.S.R. into a unitary state. But that never happened.

Stalin died in 1953 and the right the republics to leave the Soviet Union was reiterated in the Soviet Constitution adopted under Leonid Brezhnev in 1977.

Ethnic republics that had only autonomous status remained within the larger union republics — Chechnya, Daghestan, Tatarstan, and Buryatia within Russia, for example, and Karakalpakstan within Uzbekistan.

Exactly why Putin criticized Lenin in public and once more praised Stalin may be known only to Putin.

Although Putin said in Stavropol that the issue of Lenin’s burial is not on the agenda, his bold statements regarding what he suggested were Lenin’s “mistakes” — including the destruction of Russia as a state and the killing Tsar Nicolas II and his family — sounded like an attempt to revise Lenin’s role in the Russian history in general.

The answers could come soon, with the centennial of the Great October Revolution of 1917 approaching next year.

Will Russia bury Lenin by then?