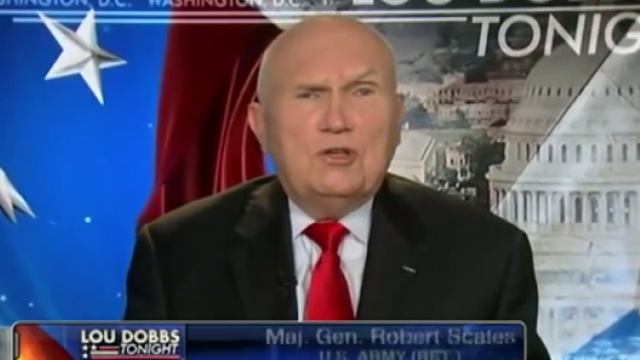 Russian mass media has either misinterpreted or misrepresented comments made by retired U.S. Major General Robert Scales. The controversy revolves around a comment he made on the U.S.’s Fox News network on March 10 about a hypothetical – and unlikely – war scenario in Ukraine in which the object would be “to start killing Russians.”

Russia’s Ren.tv reported two days later: “The scandal occurred live on the American TV channel Fox News. The retired Major General Robert Scales called for ‘killing Russians.’ According to him, that is the solution to the Ukrainian crisis.”

The same day, Lenta.ru stated: “The retired Major General Robert Scales stated on the Fox News TV channel that the USA could help Kyiv to win on Donbas only by killing Russians.”

The video of Scales’ comments gives the needed context. First and foremost, he is talking about a hypothetical military situation in Ukraine, and one in which it is soldier against soldier – and here, he is talking about killing Russian soldier who are now already in eastern Ukraine.

Moreover, the views expressed here are those of one retired general who publicly, but as a private citizen, laments that tougher military measures aren’t being taken by the U.S. to combat Russian soldiers now on Ukrainian territory in order to end the conflict. And he admits that these measures are not likely to happen.

Here is what Scales says.

“I think to no effect, Lou. It is game, set, and match in Ukraine. The only way the U.S. can have any effect in this region and turn the tide is to start killing Russians. Killing so many Russians that even Putin’s media can’t hide the fact that Russians are returning to the Motherland in body bags. But given the amount of support we’ve given the Ukrainians, given the ability of the Ukrainians themselves to counterattack, to get seized [ by the] 12,000 Russians camped in their country – sadly, that is not likely to happen.”

Russian law-enforcement authorities have opened a criminal case against Scales for “public calls using mass media for launching a war.”

Robert Scales retired from the army in 2000.