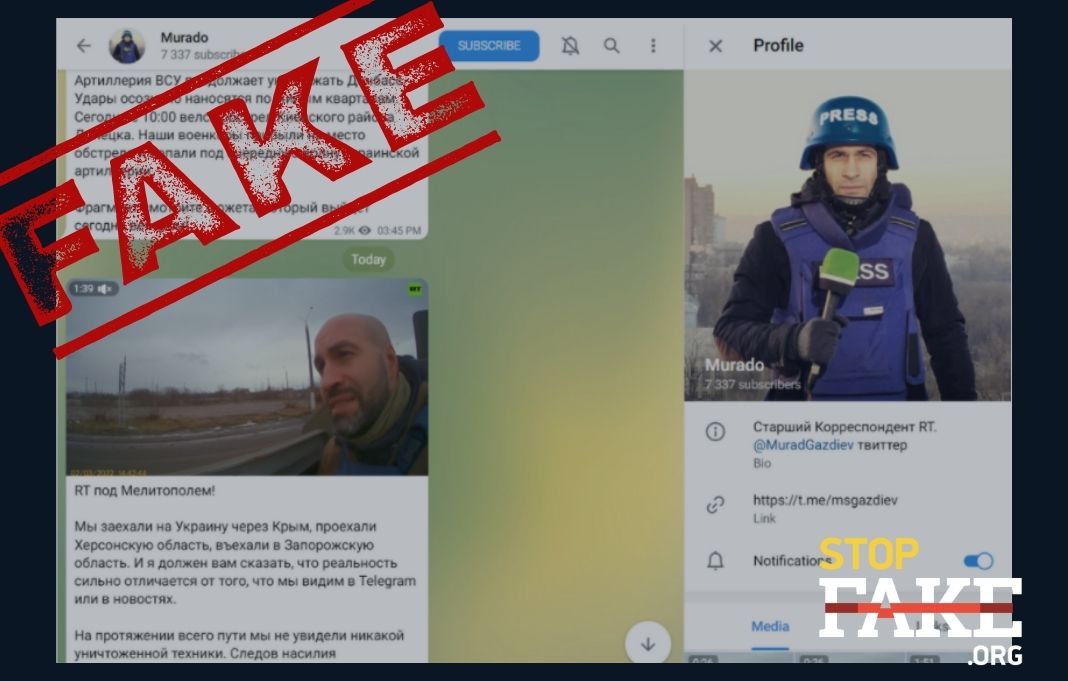 The Russian propagandist channel RT featured a story taped on March 2 on the outskirts of the southern Ukrainian city of Melitopol. In the report RT’s military correspondent Murad Gazdiev claims that “he could not enter the city of Melitopol, although the situation was calm”. The time caption on the video read 14:43. At that time in the center of Melitopol a demonstration was taking place in support of Ukraine. According to eyewitnesses, two people were wounded during the demonstrations by rifle fire from a government building captured by Russian troops.

Of the many videos taken in Melitopol on March 2, it is clear there was a pro-Ukrainian demonstration in the city. People were marching with Ukrainian flags, chanting “Putin is a d&^k” and “Go Home!”. The march took place in the center of the city. That is why Murad Gazdiev and other Russian correspondents “could not enter Melitopol”, because a pro-Ukrainian demonstration dare not appear in their propagandist stories.

Murad Gazdiev claims that there are patrols in Melitopol “to protect homes and shops from looters”. According to eyewitness, these “patrols” aren’t stopping local saboteurs from looting. “Russian soldiers themselves are actively looting local shops, they tried to break into a mobile telephone store” says Tetiana, a Melitopol local.

Gazdiev claims that Melitopol locals are wearing white ribbons in support of the invading Russian army, this is a new trend in the city, he says. However, locals deny that there is such a trend. “Those that do wear white armbands are always looking over their shoulder so that no one whacks them” says a local resident.