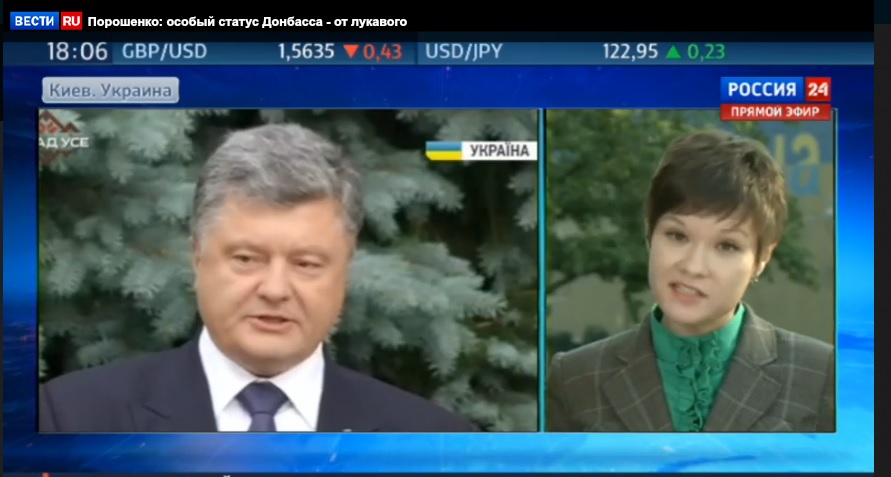 The Russian television network Russia 24 falsely reported about new powers it said would be conferred upon the president of Ukraine after the adoption of constitutional amendments regarding the decentralization of powers.

The journalist states (from 3:10): “As for the local self-government authorities, the president can dissolve them by his decision at any time. He even does not have to consult with anybody.”

This was reported after Ukraine President Petro Poroshenko presented draft amendments to the Constitution of Ukraine on July 1.

In fact, Poroshenko did not propose that the president could dissolve local authorities at “any time.” He or any other president would only have the authority to do so when there is a threat to the sovereignty, territorial integrity, and national security of the state.

Poroshenko said (from 13:27): “The Constitutional Commission made a wise and right decision to grant the President, the Constitutional Court, and the Parliament [all three institutions] the possibility to bring to justice by combined efforts those local councils that, God forbid, will ‘fall into the sin of separatism’ and endanger the sovereignty, territorial integrity and national security of Ukraine.”

Moreover, after the adoption of the amendments to the Constitution, the President will not be able to dissolve local councils at his sole discretion: he will only be able to suspend their powers. Then the Constitutional Court must make a legal evaluation of the President’s actions, and then the Parliament must decide whether to dissolve the rule of local authorities accused of separatism and to set new local elections.