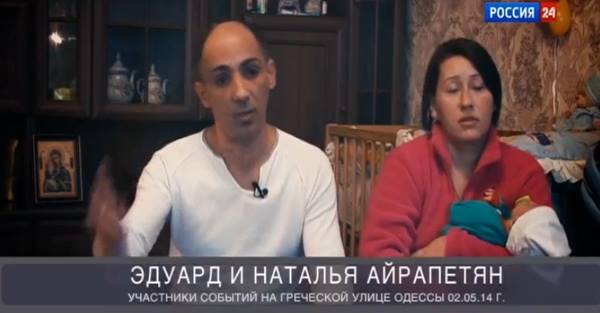 On April 29, the Russia 24 network broadcast Arkady Mamontov’s movie devoted to the tragic events in Odesa on May 2, 2014. Eduard Hayrapetyan was among participants in the program as a witness of the events, though he is wanted on suspicion of murder in Ukraine.

Hayrapetyan participated in the Odesa clashes on the side of the pro-Russian extremists. During the Russia 24 program, he and his wife Natalya described the “atrocities of the Kiev junta,” when many people were burned alive in the Odesa House of Trade Unions. Play-by-play photos from that day show that Hayrapetyan actually took part in the clashes. However, he took the side of people with red tapes (pro-Russian extremists), shooting at unarmed protesters. This means that Mamontov presented a man as a hero who very possibly fired at and killed unarmed victims. Also, according to Bessarabia Inform, Hayrapetyan was seen in Izmail at a breakaway, pro-Russian rally.