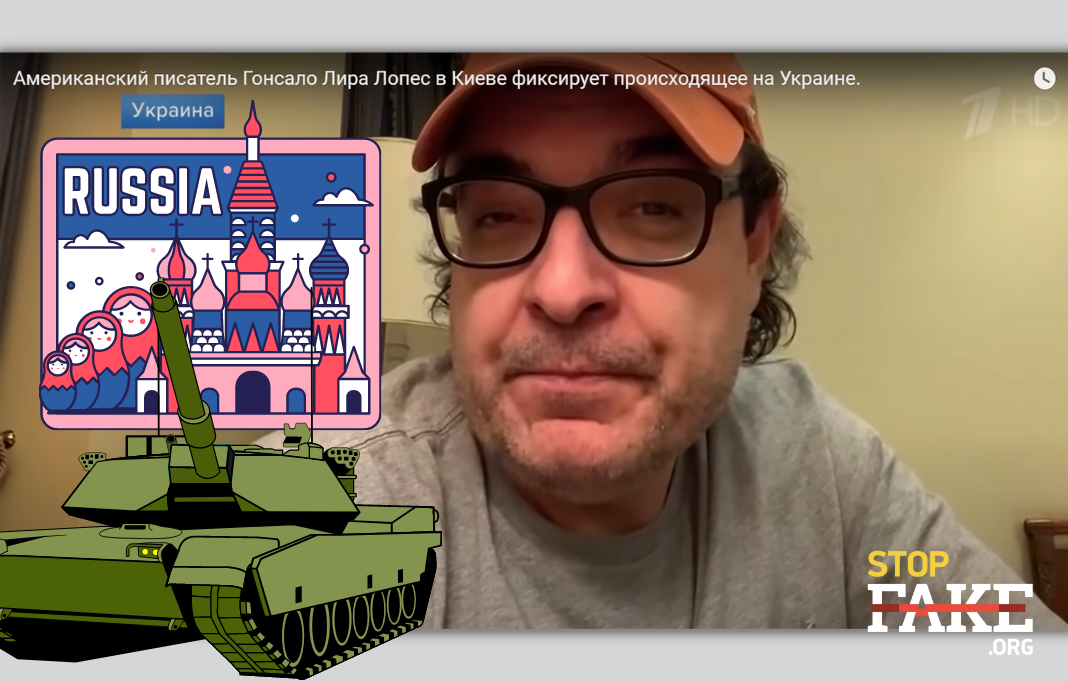 Russian media have been citing “reports” by an “American writer” (who also sometimes calls himself a director) Gonzalo Lira Lopez from the streets of Kyiv. Pravda.ru, Zvezda, Komsomolskaya Pravda, Vzglyad, RG and others all feature Lira Lopez’s videos showing the alleged chaos engulfing Ukraine’s capital. Lira Lopez is filming scenes that are meant to appear as acts of looting, shootings between local residents and a decline in the Ukrainians’ fighting spirit. He also claims that Ukraine’s President Volodymyr Zelensky’s regime is using the population as a “living shield” against the Russians. Lira Lopez’s claims mirror the main narratives of Russian propaganda that are currently being broadcast on Russian media and social networks, and the “American writer and director” who distributes them turns out to be an ordinary conspiracy theorist, misogynist and supporter of “traditional values”.

Judging from the posts that Lira Lopez is publishing on his Telegram channel, he arrived in Ukraine immediately prior to the Russian invasion. Even before his arrival in Ukraine, at the beginning of February he was posting his pronouncements on how the United States wanted to “drag Russia into a war” and were inciting Ukraine to attack Russia.

While in Kyiv, on February 24 Lira Lopez began posting commentary that “Putin’s “Empire of Lies” speech is a declaration of war against the United States. “It’s really powerful stuff. And it makes clear exactly why the Russians are invading Ukraine” he wrote. His posts mirror Kremlin messaging exactly. At the beginning of Russia’s invasion of Ukraine, he wrote that cutting Russia off from the Swift program – the West will only be harming itself with such a move, Lira Lopez wrote.

As the invasion progressed Lira Lopez began writing that Russian soldiers were not killing locals in Kyiv and that weapons were being handed out to civilians to bring on “chaos and looting” in the capital and to provide the West with a picture of “the bloody war allegedly waged by Russia”. “In the West, they say nothing that Zelensky, by issuing weapons, practically armed the criminals. And now they have anarchy here, competing who’s the most important, and when this is established, the ordinary people will become their targets. That’s what Zelensky’s regime did! So let’s not make mistakes, these people have created chaos here, across the entire country in the name of fighting the Russians. This is absurd and irresponsible and will only impact negatively on the Ukrainian people. I’ve come to the conclusion that Zelensky’s regime is evil” the American Lira Lopez writes on his Telegram feed.

Gonzalo Lira Lopez is such a complete and unadulterated Kremlin apologist that it is almost painful to read his posts and watch his lying videos. He does not post real photos of the war that Russia has brought to Ukraine, and what visuals he does post he downplays and says that that which is being called a Russian invasion of Ukraine in reality looks a lot less threatening than a Black Lives Matter demonstration.

When the number of photos and videos of shelled Ukrainian cities became too numerous to ignore, Lira Lopez posted a photograph of a rocket that hit a street in Kharkiv and wrote that “obviously this was a malfunction. The aircraft carrying this must have dropped it by accident, not intending to hit any target with it.”

In other ports, this American propagandist echoes many of the other high profile Kremlin fakes that have been published in recent days. He writes that President Zelensky most likely “left the capital a long time ago” and is now in a bunker and that Ukrainians shooting down countless Russian planes is just Western propaganda.

When it became clear that the Russian advance was stalling and Russian soldiers were being defeated, Lira Lopes compared Putin’s invasion plans for Ukraine to how Nazi Germany invaded Poland – without a blitzkrieg, gradually over a course of 35 days.

Lira Lopez’s posts are constantly quoted by the Russian media and complement the mountain of lies that Russian propagandists have created around the invasion of Ukraine.  As early as February 28 he appeared on Russia’s First state channel and declared that “unlike the US military, the Russian military do wage destructive wars, but are only trying to seize military facilities. He calls the Ukrainian government “Zelensky’s regime”.

In addition to the videos that Lira Lopez is distributing through his Telegram channel, he also began appearing on YouTube on a regular basis, Currently he has six videos up on his You Tube channel. On the American forums Reddit and Quora, there is a mixed reaction of humor and irony to Lira Lopez’s geopolitical pronouncements. His parroting of Kremlin propaganda has been duly noted and he was completely outed for his lying in a scathing Daily Beast  story entitled How a sleazy American dating coach became a pro-Putin shill in Ukraine.