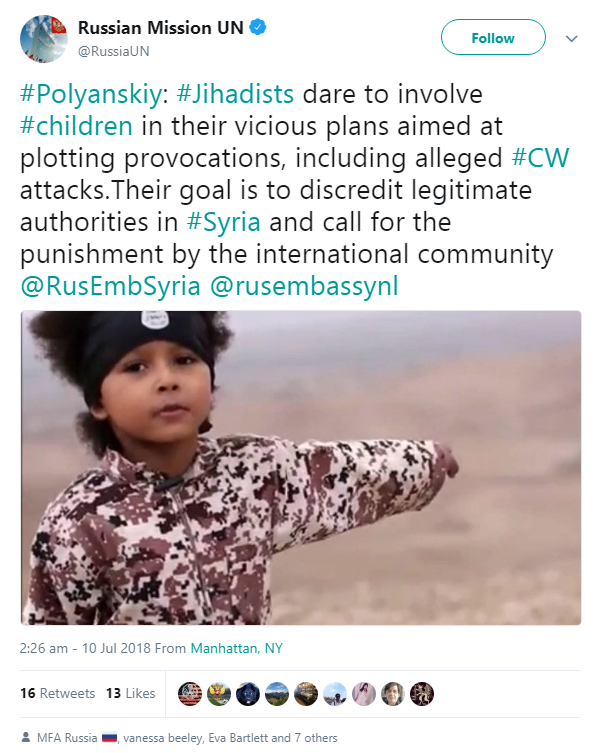 Some of the individuals tagged in tweets recently by Russian Mission UN (@RussiaUN), which has 31.1K followers, provide insight into who the Kremlin relies on to spread its propaganda message. They include well-known RT contributors and “independent bloggers”, as well as anonymous accounts or accounts with the name of a person whose identity can’t be verified. On a day when Twitter plans to remove millions of locked accounts from people’s follower counts, it’s worth noting that Russia still has a wide range of options for exploiting social media.

Two tweets from July 10 included most of the tagged accounts. One presumably referred to Ukraine and Latvia and said, “It is unacceptable to impose on #children ideology of #nationalism, to teach them false history and values. They should not be discriminated on national origin or be denied the right to learn in native language. We’ll continue to draw intl attention to such violations in some States.” 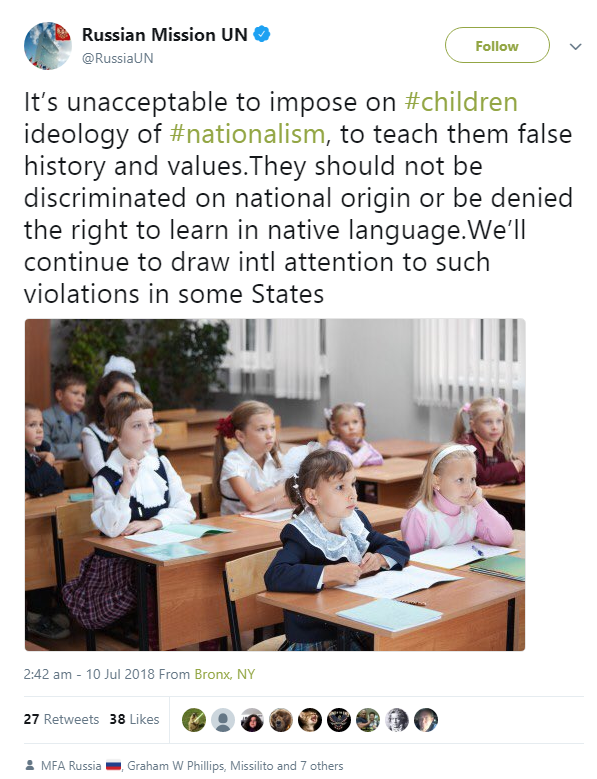 The other said, “#Polyanskiy: #Jihadists dare to involve #children in their vicious plans aimed at plotting provocations, including alleged #CW attacks.

Their goal is to discredit legitimate authorities in #Syria and call for the punishment by the international community.”

The tagged individuals also often contribute to and retweet stories from a number of supposedly independent websites on the left and the right, including Grayzone Project, The Canary, NewsBud, Sqwawkbox, 21st Century Wire and Antiwar.com. The outlets’ slant on everything is almost identical to RT’s, despite their asserted independence. A person who thinks the US government is imperialist and militaristic is also likely to deny Assad’s use of chemical weapons and believe that the attack on Sergei and Yulia Skripal was staged, and that Ukraine is governed by neo-Nazis. Russia is never accused of imperialism or militarism.

The following is a rundown of the most notable people tagged by Russian Mission UN, in order of their Twitter follower numbers. Hopefully Russia’s official Twitter accounts will continue tagging friends and supporters so that we can learn more about who is doing their dirty work.

Well-known pro-Russia American journalist. Senior editor of the Grayzone Project, which tweets frequently about Ukrainians being neo-Nazis. On July 2 the Grayzone Project announced a partnership with the UK’s far-left outlet The Canary, which also promotes Russian propaganda. A typical comment by Blumenthal to Russia’s RT in December 2017 was expressed in their headline: “’Russia collusion allegations unproven; what we are looking at is Israel-gate’ – Max Blumenthal.”

Maram Susli, popular Syrian-Australian YouTuber who denies the use of chemical weapons by Assad. Tweeted on July 10: “#BorisJohnson once said that Assad should be decapitated, which showed us that Boris is exactly like the ISIS terrorists his government supports. I’m not sure that the #Assadcurse is done with him.” Her tweet included a picture of Johnson with a headline saying “Assad must go,” and a picture of Assad saying “Who must go?” after Johnson’s resignation as UK foreign secretary. On July 6 she tweeted, “Not content with gassing just #Syrians and #Russian [sic] in false flag chemical attacks, the UK government is now gassing its own citizens to score political points. #AmesburyNovichok.”

Editor-in-chief of website NewsBud and FBI whistleblower. A typical NewsBud YouTube video that she presented in April was called “They Lied About Iraq, They Lied About Libya, They’re Lying About Syria!” Also in April, an article by Kurt Nimmo on NewsBud repeated a Russian propaganda lie that Sergei and Yulia Skripal were poisoned by the substance BZ, not Novichok. Nimmo presented the claim of Russian Foreign Minister Sergei Lavrov, a distortion of a report by a Swiss lab, as fact.

Notorious British “independent blogger” who supports Russia’s invasion of Ukraine and has been seen tormenting Ukrainian POWs. As he says in a pinned tweet, “Guys, I rarely ask, but all my work is completely crowdfunded, and I’m always struggling to just about cover costs! If you can be a part of making it all possible, click here!” On July 10, in response to Croatia’s Domagoj Vida saying “Glory to Ukraine!”, Phillips tweeted: “Where there’s Croatia, there’s fascist banners…” He also retweeted the account English Russia (@EnglishRussia1) saying “Because of the football story people learned that there is an active Ustash (Nazi, Fascist according to Wikipedia) movement active in Croatia.” The English Russia account has 64.2K followers. On July 12 Phillips tweeted that he planned to return from Russia to live in England.

Canadian freelance journalist and Assad supporter. Works hard to attempt to refute allegations that Assad committed chemical weapons attacks. Retweets British left-wing writers and outlets such as John Pilger and Sqwawkbox. Writes regularly for RT, for example on June 28 an article with the headline “Bellingcat & Atlantic Council join to award exploited Syrian child & American mass murderer.” The “mass murderer” she was referring to was former US Secretary of State Madeleine Albright. On June 1 she wrote an article for RT with the  headline “Syrian civilians from ground zero expose chemical hoax.”

British blogger based in France who writes in support of Assad. According to Wikipedia, she believes that the Charlie Hebdo massacre in France in January 2015 was a false flag operation and that “Zionists rule France”. She devotes an enormous amount of effort to trying to prove that Assad’s chemical weapons attacks are also “false flags”. For example, on July 2 she wrote an article for her regular outlet 21st Century Wire with the headline “False Flag Fail: How Syrian Civilians Derailed White Helmet ‘Chemical Stunt’ in Eastern Ghouta.”

American conservative, editor of Antiwar.com. On July 9 he tweeted: “The sanctions on Russia should never have been imposed in the first place, but the support for Old-fashioned diplomacy – talking! – is encouraging. After all, Trump voters voted for peace with Russia.” On the same day he tweeted: “US out of NATO – let the Eurovision-weenies pay for their own defense. Ditch Article 5 – cut the tripwires of war. #AmericaFirst.”

Profile description says: “News from the East, #Novorossia, #Russia and the Middle East. Stop #NATO.” Retweets Russian propaganda and writes own tweets about attacks by the “Ukrainian regime” and Syrian government successes.

Tweets (mainly retweets) about the Russian military. Identity not known.

Left-wing American journalist whose biography on RT’s website says: “Caleb Maupin is a radical journalist and political analyst who lives in New York City… He is a youth organizer for the International Action Center and was involved in the Occupy Wall Street movement from its planning stages in August 2011. He has worked against police brutality, mass incarceration, and imperialist war. He works to promote revolutionary ideology, and to support all who fight against the global system of monopoly capitalist imperialism.” On July 11 he tweeted: “Gotta love anti #DPRK #Propaganda. One minute they claim #KimJongUn is ‘starving his own people.’ Then… They attack and mock him for inspecting a new agricultural project. @AJplus never fails to disgust me.” 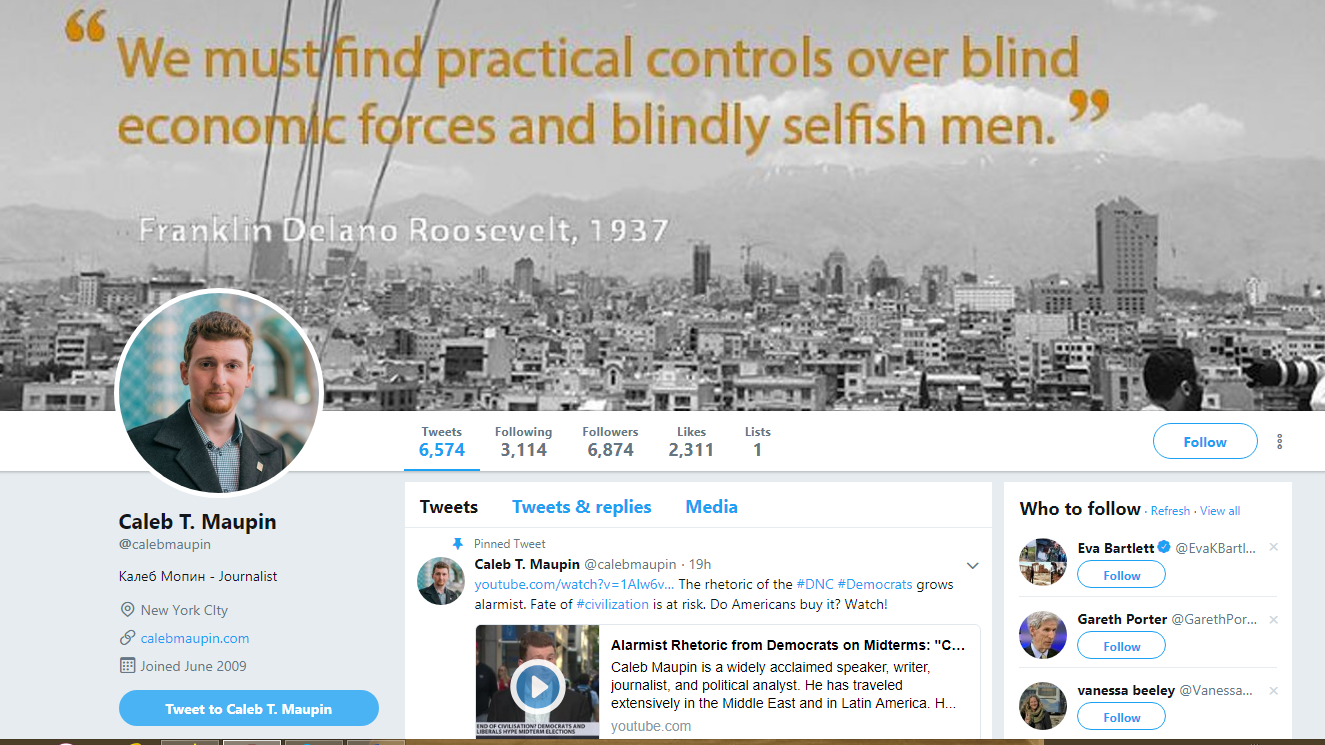 NO WAR IN SYRIA OUTRAGED

Anonymous account purporting to be a supporter of left-wing US Senator Bernie Sanders. Account consists almost exclusively of retweets about US and international politics.