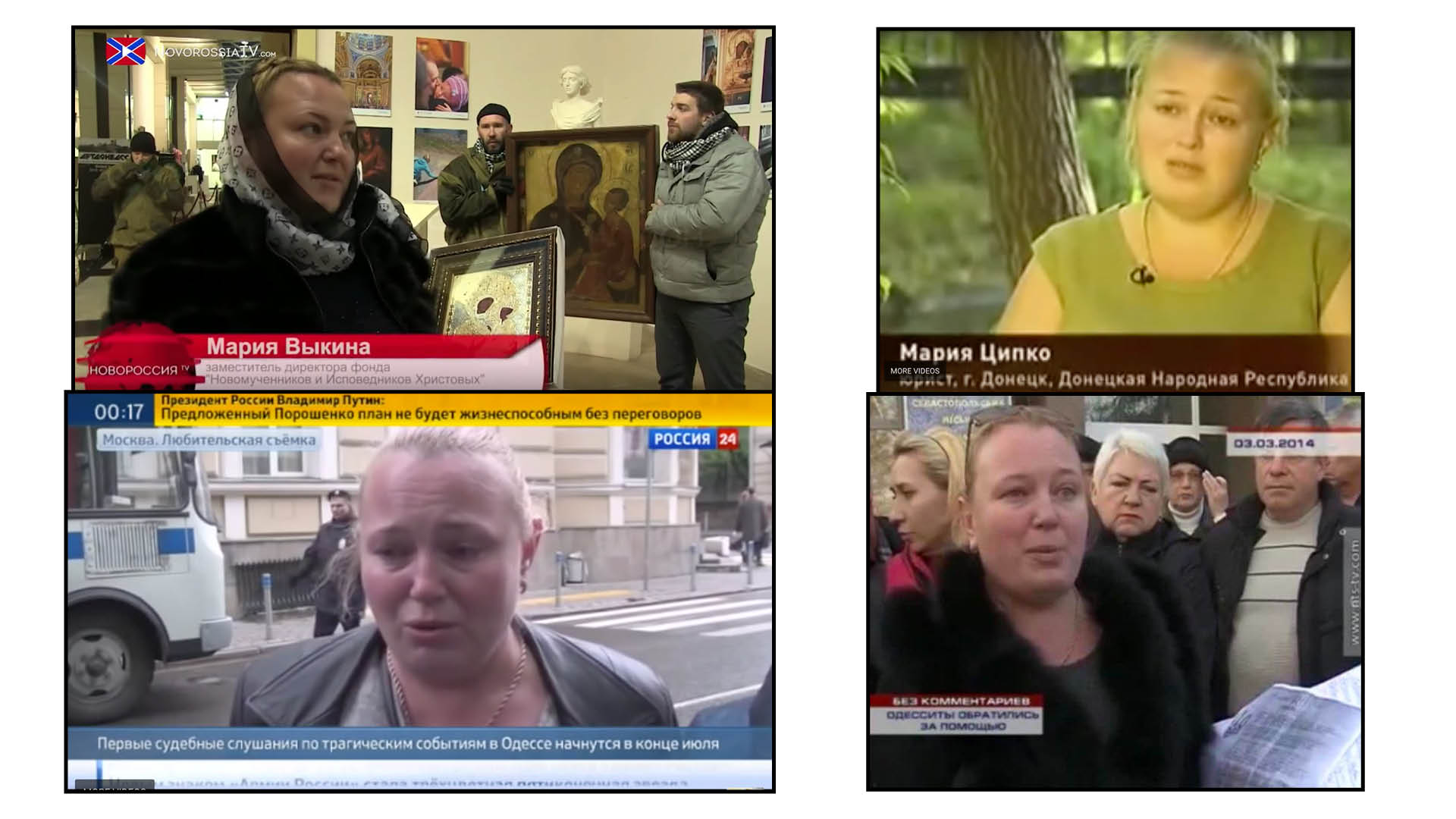 The dark arts of disinformation has many different shades. Have you ever had the feeling that you have seen that person before, even if the name looks unfamiliar? Well, if you are a regular consumer of Kremlin-funded media, it might be more than just a feeling. As the conflict broke out in Ukraine in 2014 a well-prepared information warfare campaign was carried out to set the public mood against the Ukrainian forces and Ukrainian nation. One of such techniques was to overfill the media with made up stories of Ukrainian troops committing various crimes. In many cases the same actors were used to play the roles of alleged locals. These forgeries were detected rather soon, but the damage had already been done and certainly not all of the people who saw the fake reports were informed that they were lied to. Despite the fact that the use of this method has lately decreased significantly, it remains one of the most blatant and effective tools in information warfare. In our ‘Disinfo Patterns’ series, Vilnius Institute for Policy Analysis continues to present various methods and tools that Kremlin-funded media uses to achieve their goals. This time VIPA takes a deeper look into the use of the same actors in different propaganda videos. Here is what we found.

‘I think I saw you before’

The logic behind this disinformation tool is rather simple. In order to make as many heart-touching stories, mobile reporter teams are deployed. If there are not enough of events worthy to report on, new ones have to be invented to feed the population with the preferred ideological messages and images. Here are a few actors that were used early on in 2014, which should be kept on the radar. The likeliness of them to appear can be debated, but these actors were caught red-handed and serve as proof of the dirty Kremlin information games. Here is a collection of the most infamous actors who have been used in the Russian propaganda.

Probably the most infamous actor that has showed up multiple times on Russian and Russian-led separatist media outlets is the actor Maria Cipko. She is a professional impersonator (гастролерша) working for the Kremlin propaganda apparatus and appearing in all sorts of different characters throughout various mainstream and niche Russian-language media outlets. She appeared in video reports in various cities of Ukraine, Russian occupied territories in Donbas and in Russia itself. Most of her roles were created in 2014-2015, as in this period of time this new tactic proved to be highly effective.

She had played various roles throughout her acting career, including an inhabitant of Odesa who asked Russia to intervene militarily and also scammed hundreds of people by collecting charity for the alleged victims in Donbas. She also played a lawyer from Kramatorsk, talking about a family that was allegedly murdered by Ukrainians in Kramatorsk. She had also appeared in the so-called Donetsk People’s Republic public television, where she presented herself as the founder of a new fund for martyrs. We have found at least 8 different public appearances still available on the internet. Reportedly she was detained by the Ukrainian security services in 2015 and her whereabouts are currently unknown.

Recently, in April 2018, allegations appeared that Cipko was captured on camera in one of protests in Latvia. As the Russian-speaking community in Latvia joined a rally to protest against the education reform which is aimed to establish that the so-called “Russian schools” teach more subjects in Latvian, a fairly similar lady was noticed in the crowd. When rumors about her appearance started to spread, Russian-language media in Latvia debunked the story, providing evidence that the woman was actually a resident of Latvia. It is a telling example and reminder which shows that such allegations should be carefully investigated, as rumors tend to spread fast causing damage to innocent people and sowing panic.

Another well-known example of an actor who faked an infamous story was Galyna Pyshnyak. She appeared on the Russia’s First Channel (Первый Канал) in 2014, not long after the conflict in Ukraine broke out. She introduced herself as a refugee from Sloviansk, Ukraine, which she was forced to leave because of the alleged atrocities inflicted by the Ukrainian soldiers. She claimed to have witnessed Ukrainian soldiers crucifying a three year old in front of her mother’s eyes. This story was quickly debunked and an open source investigation revealed that she had very close ties with the Russian separatists in the area.

Her husband used to work for Berkut, and when the conflict in eastern Ukraine broke out he joined the Russian separatists. In one of the photos available online, her husband was found photographed together with the infamous separatist commander Motorola.

A reporter from Novaya Gazeta (Новая газета) went to Sloviansk, investigated the story on the ground and found out that it was completely made-up. Despite the story was debunked, the First Channel, reportedly, refused to admit that the story was fake, further suggesting that the story was an act of deliberate deceit.

There have been multiple instances when various Ukrainian websites claimed to have uncovered more Galina‘s public appearances, nonetheless these are unlikely to be true. Again, various online activists are very quick to assume the identities of fairly similar people, nonetheless in a lot of instances it is very unlikely.

Another example of a person appearing on television with different affiliations comes from Donbas. Yevgenya (last name unknown), appeared in “Humanitarian Battalion of Novorossia” YouTube reports at least twice bearing different affiliations. First time she was presented as a member of “Humanitarian Battalion of Novorossia”, while in the second report she appeared as a member of the Yekaterina Gubareva charity foundation. On both videos, she tried to look completely different: the hair and clothing were different, the facial expressions were not the same, also the mission statements were different as well.

There have been more appearances of her on the same YouTube channel, suggesting that she works closely with Russian separatists in Donbas.

The following example shows how the same footage is used by different media outlets and contain different affiliations. Three different channels have featured interviews with one Andrei Petkov, lying wounded in a hospital in the south Ukrainian city of Mykolaiv. In the three interviews, he was identified by name. He is on his back in a hospital bed, describing his experiences in the previous evening’s violence, which left him with serious wounds. On Rossia 1 national news, Petkov described himself as an ordinary citizen of Mykolaiv, who went to protest against the new Ukrainian government. Meanwhile, NTV news conducted an interview with the same Petkov, in the same hospital bed, with the same bandage on his nose, only this was an entirely different Petkov. In a contrite voice, Petkov confessed he was a German spy for a secret European organization. Finally, in an interview conducted by the The National Independent News of Crimea a third Petkov appeared, once again lying in the same hospital. This Petkov was a noble pediatric surgeon who saved the lives of over 200 infants and who returned to his native city of Mykolaiv with an indefinite sum of his own money to help organize local protesters against the new Ukrainian government.

There are a number of websites and independent investigators who are constantly monitoring social media for similar propaganda acts. These researchers suggest a lot of different instances of potential propaganda-related acting on Russian television. Some websites reported that there are groups of professional actors who are engaging in staging propaganda scenes for the Russian-speaking media outlets.

As a lot of these websites seem to be biased and the information is unverified, all the information should be double checked before drawing conclusions. For example, here are two instances of very similar people appearing in different videos of different media outlets. Despite the striking resemblance, these images are not enough to be 100 percent sure about the identity of these persons.

How old is the technique of using the same actors to instigate different propaganda scenes is unknown. This tactic is very effective and deliberately targeted at Russian-speaking television viewers. Since most of the casual Russian TV viewers are less likely to get their everyday information from different sources, especially from sources in foreign languages, a lot of them never find out that these were professionally staged and manipulated lies. In this day and age, when active communities and independent investigators are very active on the internet, it gets increasingly harder for Kremlin-funded media to get away with these scams on a large scale. Nonetheless, it must be kept in mind that not all similar looking people are the same, and some of the allegations of seeming fakes turned out to be unfounded. As the carefully staged propaganda reports are likely to be one of the most effective forms of information warfare, these professionals also make mistakes and are in many cases are caught red-handed.

This analysis is part of the project aimed at strengthening democracy and civil society as well as fostering closer ties with the EU Eastern Partnership countries (Ukraine, Moldova, Georgia) by spreading independent information with the help of contemporary solutions. The project is implemented by Vilnius Institute for Policy Analysis. It is financed as part of Lithuanian Ministry of Foreign Affairs‘ Development Cooperation and Democracy Promotion Programme.