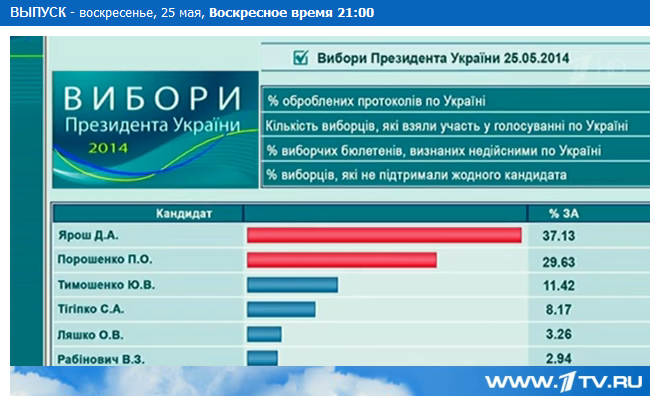 On 25 May, the day of the Ukrainian presidential elections, Russian First channel displayed in its evening edition an alleged screenshot of the Ukrainian CEC (Central Election Commission) website; according to that image, the election is being won by Dmitro Yarosh, the leader of the “Right Sector”. The host of the programme, however, announced that she herself does not understand what the image is supposed to mean, since, according to all exit polls, Petro Poroshenko is the leader in the election. Nonetheless, doubt is raised by the fact that such an image could even appear on the website of the Ukrainian CEC, particularly since that website is being closely watched by a very large number of journalists; none of them noticed this image except Russian First channel, for some reason.

Later on, the Ukrainian informational agency Ukrinform spread a message (with a reference to SBU, the Ukrainian national security service), saying that SBU knew of a virus that was supposed to cause this image to be displayed on the CEC website; however, this virus was apprehended 40 minutes before the Russian news went on the air, and the image never actually appeared on the [CEC] website.

“However, news of this did not get to Moscow in time, since nothing got in the way of [Russian First channel] presenting the fake news, which didn’t take place in reality,” writes Ukrinform agency.

Regarding the image itself, even if it had actually appeared on the Ukrainian CEC website, journalists of the leading Russian channel could not have simply accepted it at face value. The Russian news program went on the air a few minutes after the polls had just closed in Ukraine; there can be no talk of any final counts in the CEC at that point. Special attention is drawn by the fields which have beens cut off: percentage of processed protocols in Ukraine; amount of participating voters in Ukraine; and two more fields.

Presently, the Ukrainian Central Election Commission webpage, dedicated to the current election, looks like this: According to this exit-poll data, Dmitro Yarosh acquired close to 1% of the electoral votes.