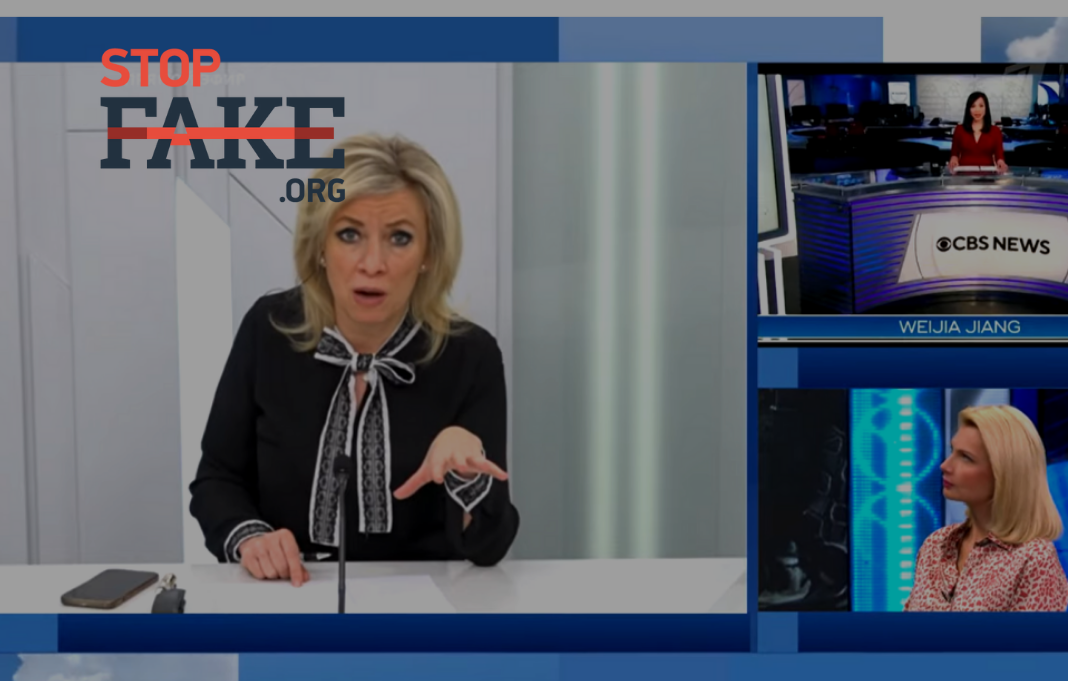 Russian Foreign Ministry Spokeswoman Maria Zakharova is a frequent guest on Russia’s many political talk shows and is often both quoted and criticized for her statements. Appearing on the program Vremya Pokazhet (Time will tell) on Russian state Channel One Zakharova announced that the Euronews report of the February 5 unity march held in Ukraine’s eastern city of Kharkiv showed that all the signs demonstrators carried were in English. Resorting to what she thought was irony, Zakharova said “everyone knows that the main language of communication in Kharkiv is English, and people speak to one another in English in order to demonstrate unity,” she concluded that the march was organized for Western media who are constantly fanning the danger of war with Russia.

The Euronews report Zakharov refers to focused on the Kharkiv march and military exercises that took place in the Chornobyl zone. The Kharkiv march footage showed large panned footage lasting some 16 seconds in which all the signs demonstrators carried being in Ukrainian. Kharkiv – tse Ukraina (Kharkiv is Ukraine) read the main sign which was held by some twenty protesters spanning the entire width of the street the demonstrators were marching on.

There were only two English language signs in the Euronews footage, one reading Stop Russian Aggression and Thank You – Дякуємо. These were the only signs that Zakharova chose to focus on, ignoring the many Ukrainian flags and other signs carried by the demonstrators. Perhaps Ms. Zakharova simply could not tell what they read, they were after all, in Ukrainian.

Ms. Zakharova’s favorite topic is accusing Western media of disinformation and propaganda. During her briefings, she never misses an opportunity to announce that Western media are creators of fake news. Having seen a couple of English language signs at the Kharkiv march, she quickly came up with a new disinformation thesis, that the Unity March was simply an event organized for Western media, who were just waiting for such footage. Zakharova the propagandist turned wishful thinking into purported reality and did not even bother to look at other media reports to understand the real pro-Ukraine spirit and purpose of the Kharkiv march, which was organized the Kharkiv civil defense community. Kharkiv lies some 42 kilometers (26 miles) from the Russian border.

Video of the Kharkiv Unity March can easily be found on YouTube, France24, Aljazeera, Reuters – all carried footage of the march where many Ukrainian language signs and countless Ukrainian flags can be seen.