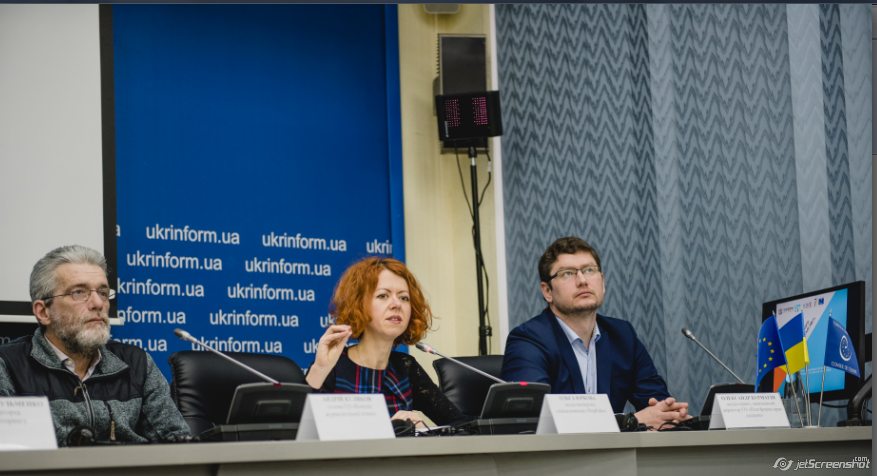 On Friday, April 19, 2019, the coalition of NGOs “Ukrainian Commission on Journalism Ethics”, “Human Rights Platform”, “Ukrainian Media and Communications Institute” and “StopFake” with the support of Council of Europe projects* held a press conference on media coverage of the election campaign on the eve of the second round of the presidential elections in Ukraine for the period from April 1 to April 12, 2019.

The monitoring is carried out with the support of the Council of Europe’s projects “Strengthening freedom of media, access to information and reinforcing public broadcasting system in Ukraine” and “Supporting Transparency, Inclusion and Honesty of Election Practices in Ukraine”, which are implemented as part of the Council of Europe Action Plan for 2018- 2021. Quantitative and qualitative monitoring is carried out daily and covers the main media and social networks. Data for media monitoring was collected by 15 independent experts who worked full time at least 5 days per a week.

Media-lawyer, executive director of the NGO “Human Rights Platform” Oleksandr Burmagin noted that there have been no changes in the work of the National Council of Ukraine on Television and Radio Broadcasting. It reacts to virtually all violations of the broadcasting organizations on election coverage and the spread of campaigning, including those recorded by the National Council itself, with letters, messages and letters of demand to bring the activity in line with the requirements of the law. Television channels do not always respond to these letters.

“As a result, there are not only the previously outlined systemic violations of the legislation on the publication of the results of social research, no indication of the polls’ interactivity in the studios and the coverage imbalance of certain candidates but also new ones. For example, overt and mass agitation during the duration of the ban after the first round (March 31) and before the official appointment of the CEC of the second (from April 8),” – says the media attorney.

The monitoring also shows that election itself was the main topic covered in the news of TV channels and online publications, as well as at talk show studios.

“The discussion focused mainly on TV debates. The way candidates were presented on TV channels was also affected by the reluctance of one of the candidates, Vladimir Zelensky, to communicate with the media. There are fewer hidden political advertisement (so-called “jeans”) relating to candidates. On the other hand, the “jeans” about the political parties appeared. It’s a start of preparations for parliamentary elections,” – said Diana Dutsik, media expert, executive director of the “Ukrainian Media and Communications Institute”.

Olga Yurkova, media expert, co-founder of StopFake, noted that messages that could indicate Russian influence during the monitoring period were observed less frequently than in previous periods. This may be due to media focus on the elections during this period. At the same time, Russian influence, in particular on elections and on candidates, has become one of the dominant topics in the election discourse.

“Social networks have played a key role in creating informational events for the candidates’ election campaign. However, their rhetoric lacked informative messages about the programs and visions of the state’s development and future. They focused on short slogans and attempts to discredit their opponents,” – Olga Yurkova added.

The most of opinion leaders either openly express their sympathies or make them quite clear for their audience. As for the Facebook pages of traditional media, the course of the election campaign was the most popular topic for all of them, including discussions of the date and time of the debates, the candidates’ medical tests and so on. This indicates the absence of a request from the majority of social media audiences for meaningful discussions.

Andrii Kulikov, Chairman of the Commission on Journalism Ethics, said: “We gained valuable experience that will come in handy soon during the parliamentary elections. The Commission on Journalism Ethics has received more visibility, which is important for rallying the journalistic community and for making our problematic issues more understandable to the general public. By processes such as tracking election coverage, we can increase the media literacy level in society and the professionalism level of the media.”

The Commission carefully considered the complaints and made three decisions on such media as “Inter”, “NewsOne”, and “TRK Ukraine” TV channels. There were two friendly warnings and one public condemnation among the Commission’s decisions, in particular “TRK Ukraine”.

It is important to note that the monitoring data demonstrate significant differences in the coverage of the women’s and men’s activities  in the Ukrainian media, especially in terms of the election campaign. On the one hand, some journalists have developed a sensitivity to gender equality, on the other hand, it has a non-systemic, personal character.

“This is due to the lack of editorial policies and prescribed editorial standards for responding to sexism and respecting gender parity in the media. As the Council of Europe’s Commission for Gender Equality remarks, gender equality does not depend only on the will of a few people. First of all, it is a product of collective activities aimed at changing the culture and mentality in the media sector,” – says media monitoring coordinator Elizaveta Kuzmenko.

Full reports on the monitoring results in Ukrainian and English, monitoring news, decisions of the Commission on Journalism Ethics are posted on the Commission’s web page in the “Elections” section.

The report in English is currently in the process of translation. It will be published as soon as the translation is made.

The presentation of the final report for the entire monitoring period and discussion on its results in a round table format are scheduled for May 20, 2019.

*Monitoring is carried out by a coalition of public organizations – Ukrainian Commission on Journalism Ethics, Human Rights Platform, Ukrainian Media and Communications Institute and StopFake with the support of the Council of Europe projects “Supporting transparency, inclusiveness and integrity of electoral practice in Ukraine” and “Strengthening freedom of media, access to information and reinforcing public broadcasting system in Ukraine”, which are implemented within the framework of the Council of Europe Action Plan for Ukraine 2018-2021. The interim and final reports will be prepared in accordance with the monitoring results.