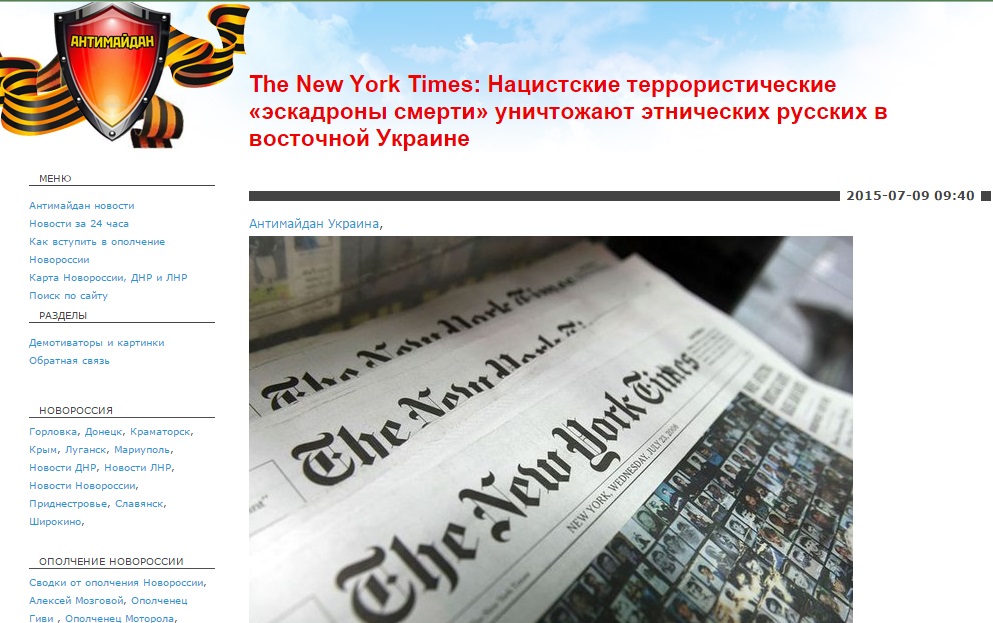 Several Russian and separatist media distorted a New York Times article and reported that the newspaper had written about “the extermination of ethnic Russians in the Eastern Ukraine” by Ukrainian volunteer battalions. But nothing to this effect was in the article, which reported on three Chechen battalions fighting alongside the Ukrainian army in the eastern part of the country.

What in fact the media was citing was not the Times, but an article published on July 7 on Consortiumnews.com, written by its editor, American journalist Robert Parry. Parry’s views have been openly pro-Russia regarding the conflict in Ukraine.

Parry’s article was translated into Russian on the Internet-site of the Kharkov News Agency. Then it appeared on other sites (antimaydan.info, antifashist.com, informburo.dn.ua, cont.ws, and others) with the headline “The New York Times: Nazi Terrorist ‘Death Squads’ Exterminate Ethnic Russians in the Eastern Ukraine.”

Russian-language articles claim: “In Ukraine Neo-Nazi storm troopers merge with an Islamic terrorist group that identifies itself as ‘brothers’ of the Islamic State. These ‘death squads’ exterminate ethnic Russians in the Eastern Ukraine, The New York Times reported.”

However, the Russian sites actually quote the first paragraph of Parry’s article about killing “ethnic Russians” in Donbas and falsely attribute it to the Times. Other bogus quotes that they claim are from the American newspaper are all also from the Consortium article.

Russian sites also incorrectly attribute accompanying photos to The New York Times. They depict the helmet of an alleged volunteer of the Azov battalion with a swastika. But again, the photos were actually used by the Consortiumnes site and credited to Parry. But it is worth recalling that the first time these photos appeared, they were from a video from a German television program.