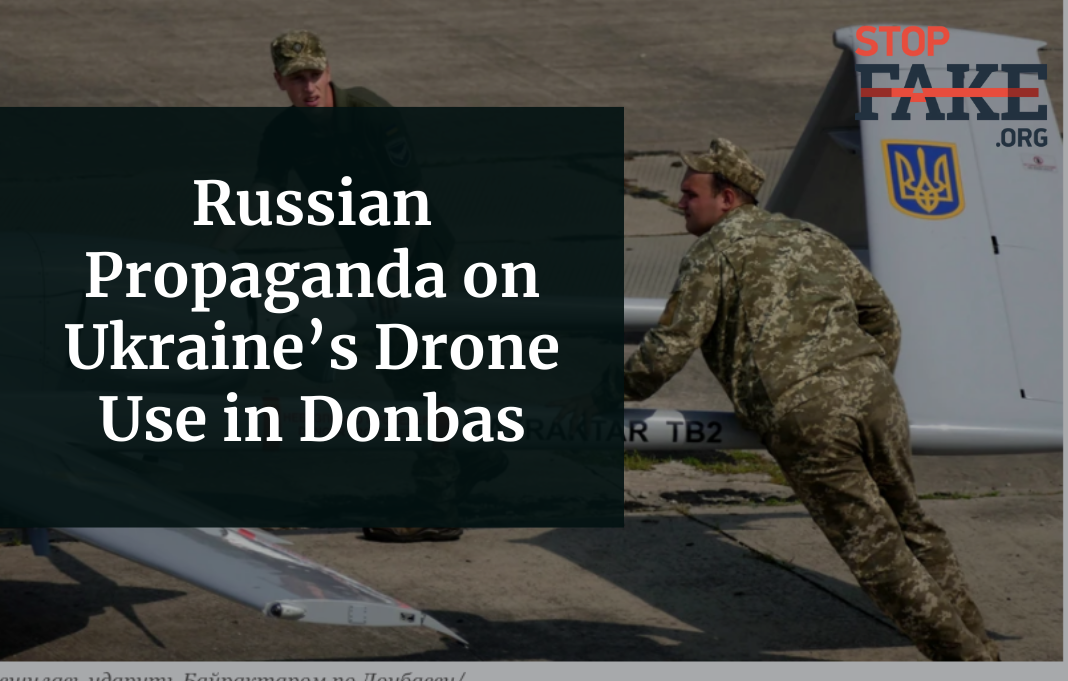 On October 26, for the first time, Ukraine’s military used the Bayraktar unmanned combat aerial vehicle with the aim of forcing the enemy to cease fire, Ukraine’s general staff informs. The drone destroyed Russian separatist artillery without crossing the line of contact. After the target was destroyed, Russian occupation forces ceased shelling Ukrainian positions.

However, Russian propaganda shelling did not stop, quite the opposite, after Ukraine’s use of the drone, the propaganda onslaught became even more intense. This in and of itself was not a surprise, but some of the latest narrative turns this event unleashed were surprising.

… AND THE WAR BEGINS

On October 27 Kremlin faithful journalist Vladimir Solovyov announced that this was the beginning of war in Donbas, as if everything that has been happening in Russian occupied Donbas up to now was peace and quiet. You can watch this announcement on Solovyov’s YouTube channel Solovyov Live (37:13)

And suddenly an entire plethora of “military correspondents” and propagandists began pedaling the war has begun topic in all sorts of variations throughout Russia’s media space.

Why did Zelensky start a war in Donbas? – hailed the pro-Kremlin website Ukraina.ru.

These absurd allegations were being hurled against a backdrop of constant shelling and death that were happening in Donbas. Only in September of this year Russian occupying forces shelled Ukrainian positions 222 times, 34 Ukrainian servicemen were wounded and four were killed. These are officially recorded events.

According to official Ukrainian Joint Forces reports, on October 25 Ukrainian military were fired upon with mortars, grenade launchers, large caliber machine guns and small arms, one drone flight was noted crossing the line of contact (most likely the Russian made Orlan-10) and one Ukrainian serviceman was wounded.

If Russian propagandists bothered to look at the stories their underlings are producing in the occupied Donetsk and Luhansk regions, they would clearly see that there is no peaceful life in these regions.

To claim that a war has begun is not only fake, it is absurd by definition.  Nevertheless Russian media launched this topic, perhaps to raise dramatic tension around the situation or perhaps to sow panic among those Russians who are not interested in politics.

Sowing panic and fear among their own citizens, the Russian propaganda machine is at the same time introducing an element of disinformation, implying that in the future Russian targets might come into view for Ukraine’s military.

The 60 minutes talk show on Russian state channel Rossia 1 focused exactly on this topic, showing the technical capabilities of the Bayraktar drone. “Given its maximum range, this pride of the Turkish military trade, the use of which settled the Karabakh conflict in a few days is capable of easily hitting targets in our country” warned Yevgeniy Popov, demonstrably underscoring the words our country.

And on October 28, the once respected and now purely propagandistic Nezavisimaya Gazeta published an entire article entitled Ukraine is preparing Bayraktar drones for strikes on targets in Russia.

The purpose of such propaganda can only be to mobilize Russian society to provide greater support for Russia’s military campaign in Donbas.

IN SEARCH OF THE BAYRAKTAR DRONE

It appears however, that not all of Russia’s messaging is so absolute and not everyone in Moscow believes that stories about terrible Ukrainians will work.

And so the Russian propaganda machine was not singing with one voice about the Ukrainians’ use of the drone. The accusation of Ukraine “starting a war” and planning to expand its military territory was coupled with the sowing of doubt as to whether the incident had actually occurred.

We can only speculate as to why Kremlin propaganda spinners chose this two-pronged messaging, but perhaps some in Russia’s leadership simply did not want the events in Donbas to look like a victory for Ukraine, no matter how small.

As part of this narrative Russian Foreign Minister Sergei Lavrov announced on October 27 that Russia was still checking information as to Ukraine had actually used the Bayraktar drone.

Vladimir Solovyov featured a video clip of Lavrov in his October 27 program on the Rossia 1 state channel and called the drone attack a Ukrainian public relations stunt.

The strangest episode in this context was the Russian Channel One Vremya Pokazhet program, which in the YouTube version is called “Was there a Bayraktar”? Both the host and the guests questioned the reality of the use of the drone and discussed the causes and consequences of this attack. They all agreed that the incident was an “information bomb.” Host Artem Sheinin put forward several versions of why Kyiv needed to use this “information bomb”. His comments on the subject were reminiscent of the Free Radio and Television of the Thousand Hills broadcasts, the Rwandan radio station of the early 1990s which played a significant role in inciting the Rwandan genocide.

Answering the question why Kyiv would choose to aggravate the situation in the east now, Russian propaganda could not focus on any one version, instead choosing several options, one more amazing than the other.

For example the hosts of the 60 Minutes program on Rossia 1 informed their viewers that Ukrainian President Volodymyr “Zelensky understands that if they don’t launch a war in Donbas, then war will start in Kyiv” because “people who are freezing in the capital in winter will launch another Maidan and overthrow the president”.

Ukraine certainly has many problems, energy among them. But a mass riot because of cold apartments when the outside temperature is 10-15 degrees Celsius is hard to imagine. While the Ukrainian audience might not take such claims seriously, the Russian viewer, who lives in much different climatic conditions, might just perceive such a story as the truth.

Although some of Ukraine’s energy sectors really depend on Russian (or Belarusian) supplies, claims that “there is no gas or coal in Ukraine, and electricity is about to run out” can be seen not as a comment on current events, but as a threat. Claims about a future Maidan because of lack of heat can also be perceived as an announcement of a future uprising, there is a possibility that pro-Russian forces in Ukraine will try to compound people’s dissatisfaction and provoke uprisings later, when real winter sets in.

The theme of energy ran through the vast majority of Russian media broadcasts and publications, because another way to explain why Kyiv used a drone in Donbas was to link the events in eastern Ukraine to the launch of Nord Stream 2, implying that Kyiv is exacerbating the situation so that the new gas pipeline that bypasses Ukraine does not begin functioning.

In an article for Komsomolskaya Pravda well-known Russian military propagandist Dmitry Steshin, wrote: “The United States is using the last opportunity to disrupt the launch of Nord Stream 2 and has demanded that Ukraine raise the ante.”

No one seems to be interested in how illogical such claims are, because an increase in hostilities in Ukraine are not a threat to Nord Stream 2 or its launch, but rather they pose a threat to the operation of gas pipelines that pass through Ukrainian territory and are alternatives to Nord Stream2.

Other pro-Kremlin media also reiterated the narrative about Kyiv’s intention to disrupt the launch of Nord Stream 2 by exacerbating the situation in Donbas, despite the contradictions between these two claims. This message was likely created in order to connect the United States to this topic and to once again reiterate a favorite Russian disinformation trope – that Kyiv obeys Washington in everything.

External rule of Ukraine by the West and the US in particular has traditionally been a favorite topic of Russian politicians and pro-Kremlin media, and it has not been forgotten this time, paying particular attention to the visit of the US Secretary of Defense Lloyd Austin to Ukraine.

Official Moscow, in turn, appealed to Washington and to the West in general, to end its military support for Ukraine.

Turkey, the country that sold Ukraine the Byraktar drone in question, got the silent treatment from Russia. The pro-Kremlin media and their talking heads never mentioned Turkey in their talk show barrages against Ukraine. The Kremlin however, decided to punish Turkey financially by partially banning the import of Turkish mandarins to Russia. This hybrid response surprised many even in Russia itself, precisely because of its clearly demonstrated hybridity and pronounced asymmetry. Although after Russia banned Azeri tomatoes following its war with Moscow’s ally Armenia, nothing should surprise us.

Russia’s propaganda response to the Ukrainian drone attack was unusually contradictory and chaotic. It seems that Moscow did not expect a proactive step from Kyiv in Donbas and simply did not have time to prepare a single message directive for all. But maybe this is what Russia’s propaganda tactics really are – multidirectional messages that disorient the audience, sow chaos and panic, first and foremost – among their own citizens.