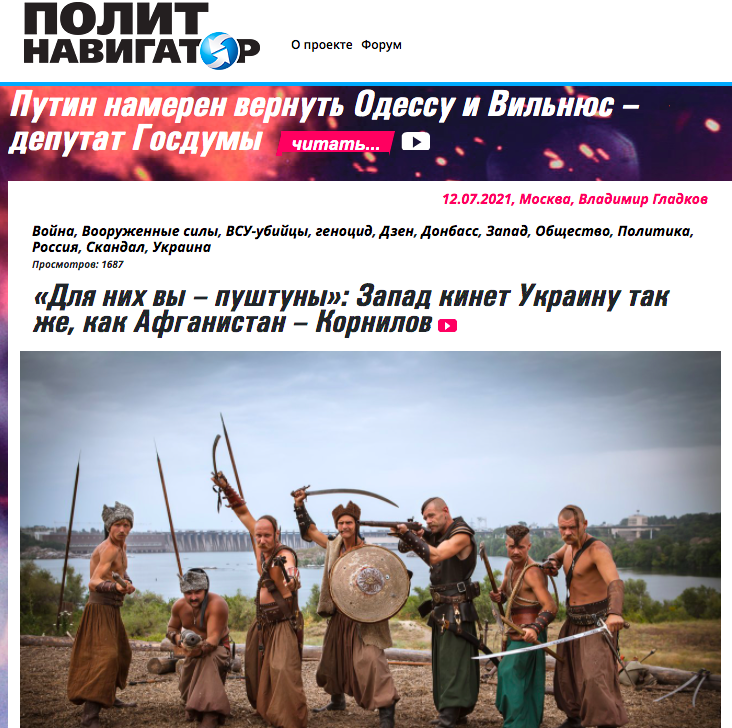 Kremlin media minions have received their latest instructions on how to do their job regarding Ukraine. Now they will not compare us to fascists or Nazis, but to the Taliban, notes Ukrainian journalist and blogger, the UNIAN agency’s Moscow correspondent Roman Cymbaliuk in his weekly overview of Russian propagandist media. It’s all about the withdrawal of western coalition forces headed by the US from Afghanistan.

Reacting to the withdrawal of American troops from Afghanistan Russian media tied the upcoming event to Ukraine. Russian propagandist and television host Olga Skabeeva declared during her Rossia 1 television program 60 Minutes that it was uncomfortable to compare Ukraine to Afghanistan, but there were no other parallels to consider. “Now the Taliban are a Russian problem, now we have a different Taliban, God forgive me, right on our border, the Ukrainian Taliban” Skabeeva said.

Russian state television has decided to equate Ukraine and its democratically elected government with a radical, militant, Islamist organization, which by the way is banned in Russia. This truly is something new. But this is not the only creative spurt produced by Kremlin propagandists.

Further television discussions however did not continue comparig Ukrainians to the Taliban, the Islamist extremists who continue to gain more control of Afghanistan as the Americans and their allies leave. In a strange turnaround Russian talking heads began comparing Ukrainians with the pro-American Afghan administration, which is slowly being forced to retreat.

The choir of experts, analysts, international observers and politicians who clamored from Russian television screens delivered the following pre-approved messages:

These propagandist messages can be seen on this episode of 60 minutes, and this one, and this newscast from Rossia 1.

These narratives were especially disseminated by Ukrainian political analysts who have become active propagandists for Russian television stations and internet publications. They carried out their assignments to propagate such analytical conclusions with fervor.

Ukraine should be watching news from Afghanistan, advises “historian and political analyst” Vladimir Kornilov. When news about Afghanistan is shown on Ukrainian television, they do not draw any parallels with Ukraine, although such parallels are self-evident. The Afghans were abandoned, “you’re on your own from now up, we are no longer responsible for this ruined and degraded country”. Ukraine of course, will be different, Kornilov said, mustering all the sarcasm he seemingly is capable of.

Ukraine’s administration should take stock of the situation in the international arena and not fall into dangerous illusions about the protection of the West. Otherwise, the country is in danger of repeating the fate of Afghanistan, said Kyiv based pro-Kremlin analyst Mykhailo Pohrebinsky on Russian television. His views were disseminated by scores of online publications, including the well-known propaganda television internet site Tsargrad.

“The Americans decided they no longer want to be in Afghanistan, they are completely satisfied having chaos in that country. And what do you want? We will have the same situation in Ukraine, the Americans can leave at any moment and leave Ukraine one on one with Moscow,” Pohrebinsky said, parroting the latest Kremlin disinformation narrative.

Ukraine born analyst Rostyslav Ishchenko who works as an analyst for RT (formerly Russia Today) followed suit in the pro-Kremlin publication Ukraina.ru. “The Afghans woke up to an abandoned Bagram base littered with equipment and no Americans. They had all flown away. Perhaps the same will happen to Ukraine one day, they will wake up and all the Americans will be gone, they will have flown away” Ishchenko said.

One of the salient points of the Kremlin’s Ukraine as Afghanistan analogy is that Ukrainians should be alarmed at how the US abandoned Afghanistan and therefore stop trusting America and instead throw themselves in to Russia’s arms. However, this narrative has a significant flaw.

The principal difference between the Ukrainian and Afghan situation is that there are no NATO coalition troops in Ukraine and NATO is not fighting on behalf of Ukraine and never has.

Afghanistan is a completely different situation. It is worth remembering how and why US and NATO troops began their Afghan operation:

American soldiers fought a real war in Afghanistan, protecting American interests and fighting terrorists who had organized the deadliest terrorist attack on US soil in American history. After 20 years of military presence in Afghanistan  America’s leadership decided that the goal of the operation was fulfilled, al-Qaeda was dismantled, Osama bin Laden had been eliminated and Afghan terrorists no longer posed a threat to the United States. “We have achieved these goals, so we left. We did not go to Afghanistan for state-building, and the Afghan people have the right and responsibility to decide their future and how they want to govern their country,” President Biden said.

Much criticism has been directed against the White House for leaving Afghanistan both in the US and internationally. The pullout will soon be history and it is completely unlike the events that have played out in Ukraine over the last 7.5 years.

In Ukraine there are not and never have been any “international terrorist groups” that threated the United States and the world at large, except of course, those military and paramilitary structures that operate in Ukraine’s Russian occupied regions and are supported by Russia. On July 17, 2014 that presence resulted in the shooting down of the civilian Malaysian MH17 flight.

Neither the US nor NATO are conducting military operations in Ukraine. All missions carried out by the Alliance and US are training or consultation missions. An extremely limited military contingent takes part in such missions. Joint exercises between Ukrainian and NATO troops are carried out from time to time but there have been no NATO deployments in Ukraine, nor have NATO forces ever participated in the war in eastern Ukraine.

It is not surprising that the Russian propagandist narrative about America abandoning Ukraine turned out to be so popular. In fact, from the very first day of war in eastern Ukraine, Russia’s disinformation offensive was filled with fakes about NATO troops instead of Ukrainian troops fighting in the east. Russian propagandist media along with pro-Kremlin sites and publications launched in Ukraine’s Russian occupied territories were filled with fakes about Polish detachments, Turkish special forces, Canadian and of course American servicemen that Russian militant separatists allegedly kept spotting. The source that invented the fake about the presence of the US army in Ukraine has now invented a new version of that same fake, this time about the withdrawal of these imaginary military units.

If one believes in this fake thesis about US and NATO troops in Ukraine, then thinking out loud about their withdrawal seems realistic and not simply a delusion. Such fantasies are intended for an audience that unquestioningly believes in Russian propaganda products, people who live in the Russian Federation and Ukrainian occupied territories, particularly those who sympathize with pro-Russian forces. This all feeds into the long-propagated Kremlin narrative of Ukraine being controlled from outside, by the West, and particularly by the United States.

Not only residents of Russian occupied territories and pro-Moscow Ukrainians believe in this Kremlin thesis, but it also has a much wider audience. Despite the lack of any evidence in real life for such claims, this thought virus about Americans leaving Ukraine and this leading to an unavoidable catastrophe is highly contagious and can infect not only residents of Russia and Ukraine’s occupied territories, but the rest of Ukraine as well.