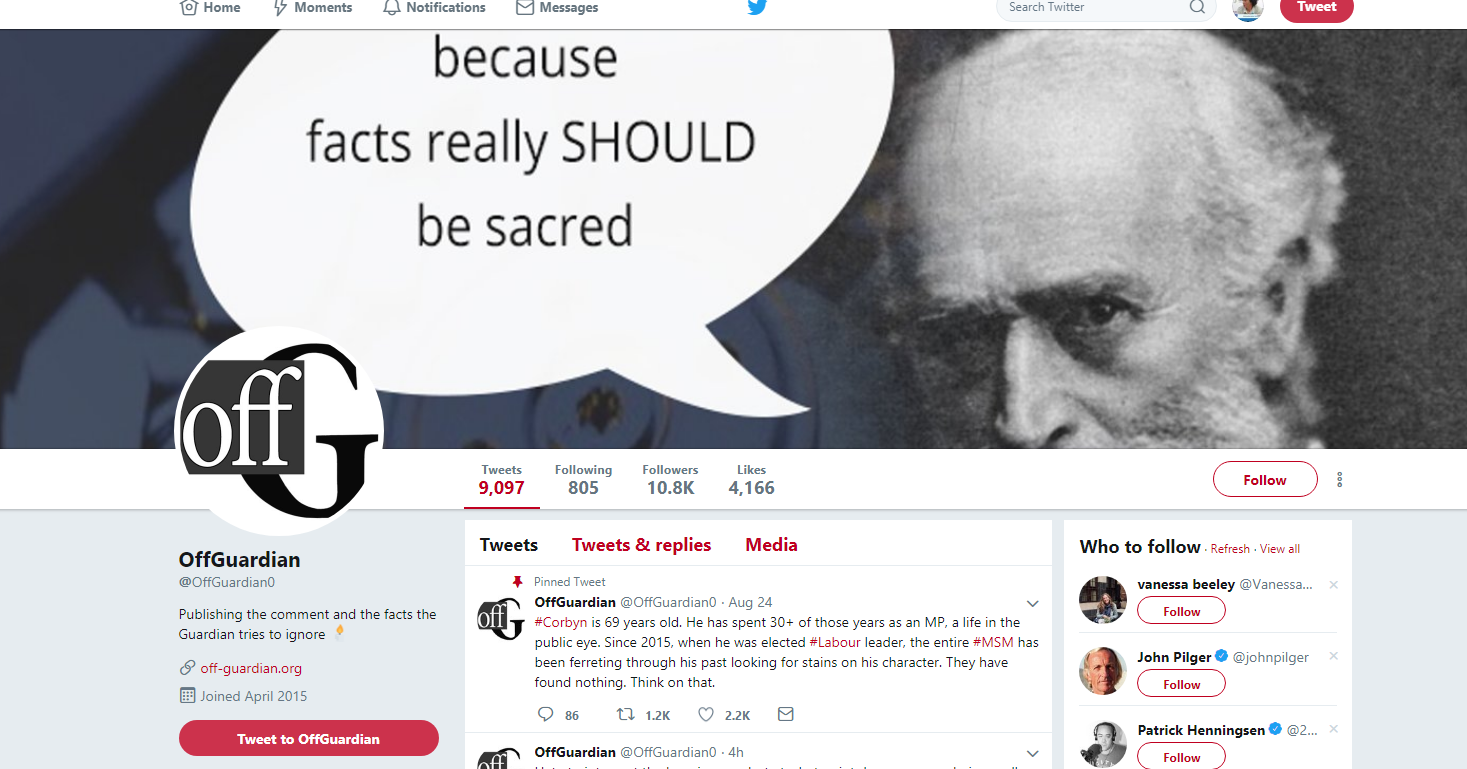 Among the various English-language promoters of Russian propaganda, a website called OffGuardian drew attention to itself recently by praising a visit to occupied Crimea by Symphonic Brass Wales. OffGuardian tweeted the headline to its anonymous article, “The Welsh Orchestra Defying the Ukrainian Coup Regime” (apparently not conceived by a native English speaker), and Symphonic Brass Wales retweeted it, before apparently undoing the retweet after receiving a storm of criticism. 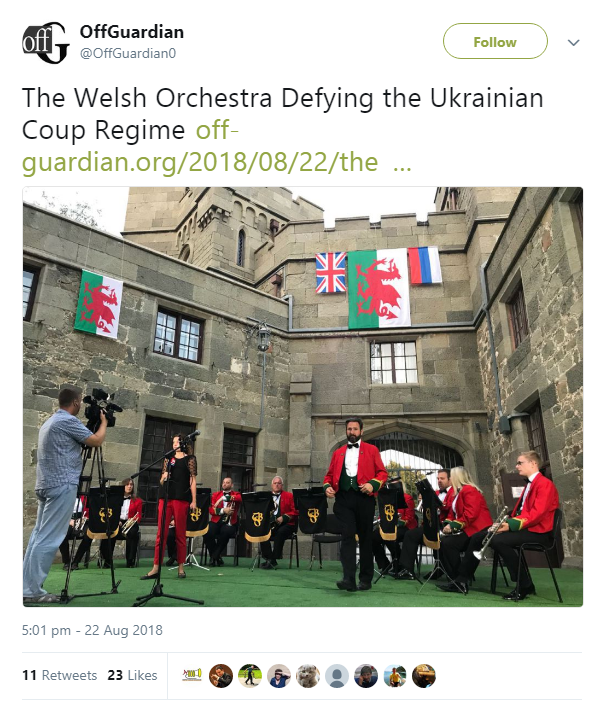 The orchestra itself is unrepentant about the trip, despite the generally negative media attention that resulted. In a press statement on September 1 it wrote, “Following our return to the U.K. we have received a number of messages, both positive and negative. The negative have been mainly from Ukrainian journalists and bloggers, while the positive have included messages of thanks from the Director of the State Palace and Department of Culture of Crimea…” The orchestra added that the majority of Crimeans are ethnically Russian, as if that somehow justified the peninsula’s annexation and their tone-deaf visit. Last year Symphonic Brass Wales performed at Vladimir Putin’s Victory Day celebration in Moscow.

OffGuardian has a longer track record of spreading lies and hate about Ukraine. In its article about Symphonic Brass Wales it quotes the Ukrainian embassy’s condemnation of the visit to Crimea and comments, “The whole situation reeks of desperation and insecurity really. A sweaty palmed, convulsive need to keep control of a situation that is rapidly slipping out of their grasp… If any of our readers are aware of any similar circumstances – of state pressure being brought against individuals or small groups – please let us know.”

A typical OffGuardian headline in poor English from July 2015, by author “Kit” was, “Ukraine accidentally all the billionaires, and there is no ‘new revolution’.” One of its barely comprehensible paragraphs reads: “The director, Oleg Senstov [sic], and his associate on trial for apparent involvment [sic] in several acts of ‘destabilisation’ during the Russian ‘annexation’ of Crimea, last  year. I have no idea if he’s guilty, but there’s nothing to say he’s clearly innocent, and the Guardian certainly is more interested in waving an anti-Russia flag than making a case. Apparently Senstov [sic] has ties to ‘right wing’ group Right Sector.”

As its name suggests, OffGuardian was allegedly created by people who were tired of being censored by the moderators of the Guardian’s comments section, so many of its articles attempt to pull apart articles in the Guardian and other “MSM” outlets. In line with the Kremlin’s goals, OffGuardian seeks to undermine trust in “mainstream media”. “If you’re also sick of being stifled, moderated, abused or slandered as Putinbots or worse, and censored to oblivion on any of the Readers’ Comments sections of our mainstream press, come and tell us about it,” OffGuardian says in its “About” section. While OffGuardian covers many topics, such as how unfair everyone is being towards Venezuelan President Nicolas Maduro, Ukraine is certainly a favourite, along with Russia’s generosity in Syria.

On May 24 OffGuardian tweeted sarcastically, “I don’t understand this at all, how can there be a rise in violent #antisemitism in #Ukraine? The #MSM told us over and over again that there are no neo-Nazis there!” Actually no one has ever written that there are “no neo-Nazis” in Ukraine, and Bellingcat recently published an investigation into Ukrainian neo-Nazis. But contrary to what the Kremlin says, neo-Nazis are not in power in Ukraine. 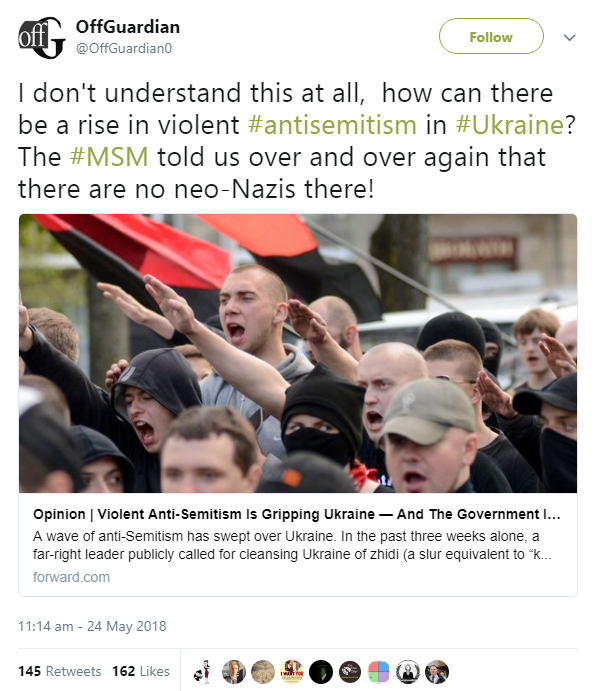 A few days later, in response to the apparent murder of Russian journalist Arkady Babchenko in Kyiv (later revealed to have been staged), OffGuardian tweeted: “It’s nice to see that Arkady Babchenko’s untimely death has reminded the Western press that #Ukraine exists. There have been at least a dozen journalists killed in Ukraine since the US-backed coup. This is what happens when you put neo-Nazis in charge.” 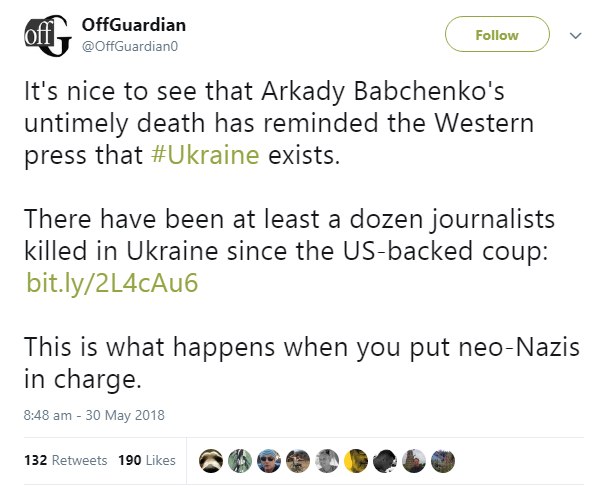 OffGuardian has often interacted approvingly with tweets by Russia’s useful idiot blogger Graham Phillips, for example in March, a week after the poisoning of Sergei and Yulia Skripal, when Phillips tweeted that he planned to report on the World Cup in Russia “while ‘my’ Prime Minister is doing everything she can to destroy everything between UK and Russia.” 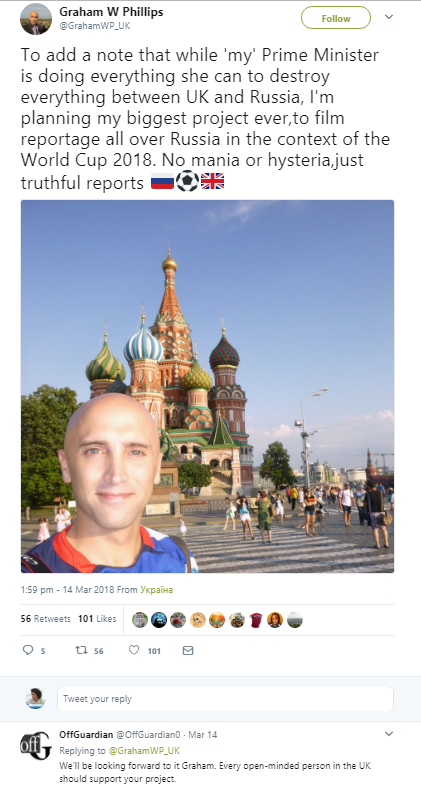 OffGuardian replied, “We’ll be looking forward to it Graham. Every open-minded person in the UK should support your project.” Phillips has since returned to the UK and been arrested and released on bail for shouting “Fascists!” and obscenities at people attending an exhibition in the Georgian embassy in London to commemorate the 10th anniversary of Russia’s invasion of Georgia.

Like many Russian propaganda websites, OffGuardian hopes to attract supporters of UK Labour Party leader Jeremy Corbyn, who himself responded to the annexation of Crimea with a shameful article in the Morning Star in April 2014 titled “NATO belligerence endangers us all.” Its subhead was: “It is the US drive to expand eastwards which lies at the root of the crisis in the former Soviet republic, argues JEREMY CORBYN – and it’s time we talked to Russia.” Corbyn wrote, “While there were democratic forces in the Maidan protests motivated by falling living standards and corruption, there were also far-right nazi groups involved. The far-right is now sitting in government in Ukraine. The origins of the Ukrainian far-right go back to those who welcomed the nazi invasion in 1941 and acted as allies of the invaders.” 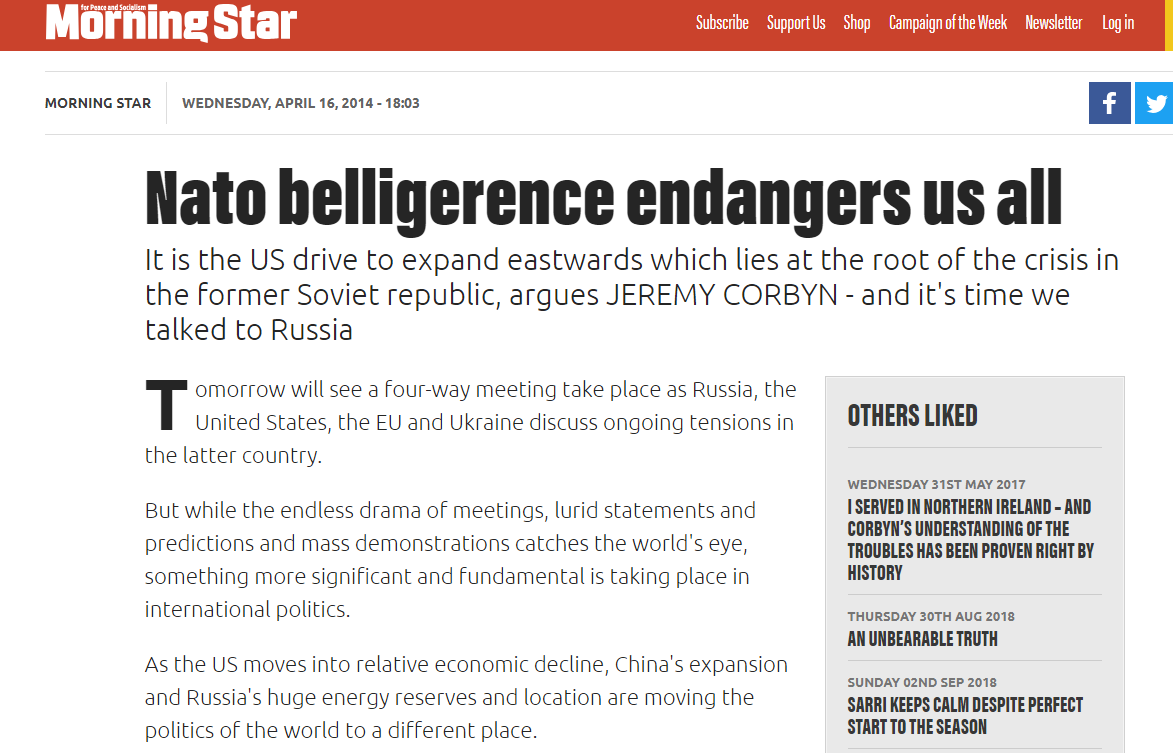 No wonder the Kremlin finds its message falls on fertile soil among the British left. OffGuardian’s pinned tweet from August 24 reads: “#Corbyn is 69 years old. He has spent 30+ of those years as an MP, a life in the public eye. Since 2015, when he was elected #Labour leader, the entire #MSM has been ferreting through his past looking for stains on his character. They have found nothing. Think on that.” In fact, Corbyn is embroiled in a scandal over his many instances of tolerance for anti-Semitism and apparent support for Palestinian terrorist groups, one of the latest of which was his comment at an event about Zionists who had lived in the UK all their lives but “don’t understand English irony.” OffGuardian has helpfully waded into the debate with a tweet on September 3, “Look at the media Zionists showing their true colours, trying to conflate opposition to Zionist ideology with racism. Zionism is not a race.”

By itself OffGuardian is not very influential, but it contributes to the growing pile of Kremlin trash disguised as left-wing ideology, and enables supposedly non-political groups such as Symphonic Brass Wales to justify their immoral actions. More seriously, as long as Jeremy Corbyn, who can’t distinguish fact from fiction, is leader of the Labour Party, the message of these semi-competent trolls will continue to spread, and British politics is in big trouble.