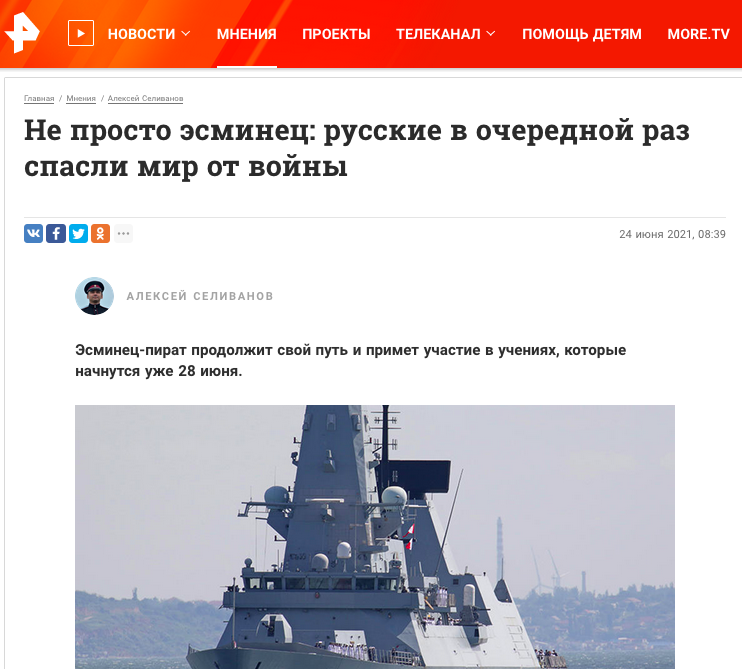 The story of the British destroyer Defender which sailed past occupied Crimea and caused an aggressive reaction from the Russian military was accompanied by a massive onslaught of fakes and posturing in the Russian media. Crimea is Russia, Britain staged a deliberate provocation, Russia prevented a new war, these and other headlines blazed across Russian publications. StopFake prepared a roundup of these Russian media reactions.

First and foremost Russia used the Defender incident to push its narrative that “Crimea is ours”. The British ship was sailing from Odesa to Georgia, passing the Crimean peninsula on its way. Russian media accused the British destroyer of entering Russian Federation waters and violating international norms and standards. Any actions taken by the Russia side were therefore correct and permissible.

We cannot allow a threat to our territorial integrity and violation of our state borders. In my opinion our armed forces took the correct and proper actions, Russian Duma deputy Anton Morozov told the newspaper Izvestia.

Russia’s Deputy Foreign Minister Sergei Ryabkov went even further saying that Russia can “bomb a target” while Lieutenant General Yvegeniy Buzhinsky insisted that the British destroyer had to be sunk. “There will definitely not be a war over this” he insisted.

Russian publications all claimed it was not worth entering territory that Moscow considers its own, saying that all such “provocations” would be suppressed. The summoning of the British ambassador to the Russian Foreign Ministry was also highlighted by many publications.

Another narrative actively propagated by the Russian media is that the Defender sailing past Crimea was a deliberate British provocation authorized by Britain’s Prime Minister Boris Johnson himself.

“The British destroyer’s route was personally approved by Prime Minister Boris Johnson, reports the Telegraph. According to experts, this decision speaks of London’s desire to put pressure on the Russian leadership” wrote the Gazeta.ru newspaper.

The Telegraph article referred to by the Russian media states that the British Foreign Office had warned the government in advance that Moscow may try to use the Defender’s passage through the Black Sea for its own purposes. Nevertheless the government considered the risks and agreed that the British warship has the right to make this legal and peaceful passage through the Black Sea.

The UK does not recognize the illegal annexation of Crimea by Russia in 2014 and considers the sea off the coast of the peninsula to be Ukraine’s territorial waters. International law allows any ship to pass through territorial waters if it is on a direct route between two points of a “peaceful passage”, according to the Telegraph. There is no mention of a “coordinated provocation” in the article.

Russian media even presented the entire situation with the British destroyer as an example of Russia actually preventing war.

“The British provocation was well planned; after all they refer to the fact that they do not recognize the Russian status of Crimea and therefore consider its territorial waters to be Ukrainian. Therefore the actions of the Russian military once again prevented a major war. This is not a joke” the REN TV website declared.

Yet another narrative about the Defender incident was the reason behind it, after all, according to Russian media there’s always some nefarious or secret explanation for everything. According to Russian military historian Dimitry Boltenkov as quoted on REN TV, British sailors simply can’t navigate their newest destroyer.

Yet another article on the REN TV website claims that the British together with their American colleagues are building two naval bases in southern Ukraine. In the coming decade these bases will become the “planning center for all manner of provocation in the Black Sea region”.

“The British are pumping up Ukraine with weapons and equipment, and at the same time stirring up aggressive aspirations in the aborigines regarding Russia and Donbass,” the same article states.

The Vzglyad newspaper also featured a story claiming the British were preparing Ukraine for maritime provocations. This familiar theme always resurfaces in the Russian media when Ukraine holds joint military exercises with other countries.

Many Russian publications resorted to using readers’ comments to stories from Western publications and presenting them as the opinions of all Europeans. REN TV featured a story entitled “Spaniards afraid of war with Russia because of Defender incident” in which REN TV claims Spanish readers accused the British of shortsightedness and hypocrisy. “They note that London is behaving badly even towards its former EU partners” REN TV states, not mentioning where these comments come from, comments which in no way can be considered as representative of all public opinion in Spain.

A similar story on the Izvestia newspaper’s website entitled “Germany advised British Fleet not to enter Russian waters” draws conclusions similar to those of REN TV purely on the basis of readers’ comments to one story in the German weekly magazine Spiegel. Izvestia provides a Spiegel hyperlink to a relatively standard news story about the Defender incident which in no way criticizes Britain. The comments however are a different story and some do state that Russia’s views and positions should be considered. However they are not in the majority and readers’ comments certainly do not portray Germany’s official position or any majority public sentiment.

Russian media also disseminated its Defense Ministry’s official statement asking the Pentagon and British military command not to tempt fate by “following the lead of Ukrainian mosquito fleet admirals and be guided by reason”.

That Kyiv managed to rob, take apart and sell off the remnants of its military fleet has long not been a secret. That is why no one came to help the Defender, writes Komsomolskaya Pravda, sarcastically noting  that “the English are drawn to Crimea… perhaps they wanted to claim the remains of their soldiers and officers that England left in 130 cemeteries near Sevastopol during the Crimean war.”