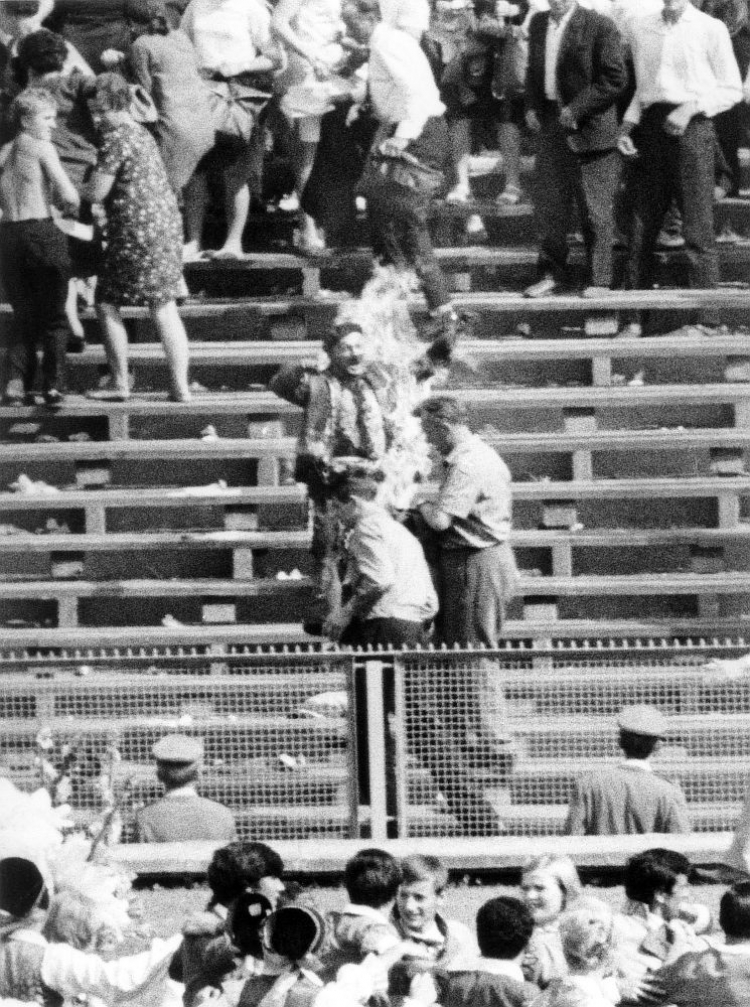 On 8th September 1968 during the national harvest festival on the 10th-Anniversary Stadium in Warsaw in the presence of communist dignitaries of the Polish People’s Republic (PRL) and over a 100 thousand people Ryszard Siwiec – former soldier of the Home Army, philosopher, accountant – self-immolated himself in the act of protest against Soviet invasion of Czechoslovakia. He died four days later on 12th September 1968 in the Praski Hospital. His act was one of the most guarded secret of the PRL. He was said to be an alcoholic and mentally ill. However, Siwiec’s action was a conscious choice and a political manifest. He justified his act in the will: „People, who maybe have a spark of humanity, of human feelings, come to your senses! Listen to my cry, to the cry of a common man, the son of the nation who beloved his own and else’s freedom over all, over his own life, come to your senses! It is still not too late!”.

Half a year after Siwiec’s action a Czech student Jan Palach set himself on fire in Wenceslas Square in Prague in the protest against the soviet intervention.

Probably those persons did not know about each other’s acts. Their dramatic form of protest was in each case attributed by the communist security service to mental problems.

In the 52. anniversary of Ryszard Siwiec’s death, thanks to Eliza Dzwonkiewicz – Consul General of the Republic of Poland and Rafał Dzięciołowski, president of the International Solidarity Foundation, a commemorative plaque was placed in Lviv on the wall of the house were Siwiec lived in the years 1920-1936. Also in Lviv he finished the Jan Długosz high school and the Faculty of Humanities of the Jan Kazimierz University and started the work in the Tax Office. Later he moved to Przemyśl.

During the unveiling of the plaque Eliza Dzwonkiewicz, Consul General of the Republic of Poland in Lviv said:

“Deeply religious and patriotic ambiance of this house and the ambiance of multinational and multicultural Lviv had and impact on his formation. He accepted upon him the self-induced death not only as a form of protest but also spiritual liberation. Ryszard Siwiec could not live with the burden of the disgrace and betrayal, in the world of lies and contempt, in the world of the values tarnished by the communists. He died holding the banner with the inscription: “For your and our freedom”.

The Consul General of the Czech Republic Pavel Pešek reminded that in Prague one of the streets is named after Ryszard Siwiec. He was also speaking about Siwiec’s imitators. He called his act “the greatest sacrifice in the name of freedom in his fire protest against the occupation of Czechoslovakia”. Rzeszów Division of the National Memory Institute of Poland prepared an exhibition about Ryszard Siwiec which accompanied the unveiling of the plaque.

Source: Kurier Galicyjski / Consulate General of the Republic of Poland in Lviv / PB