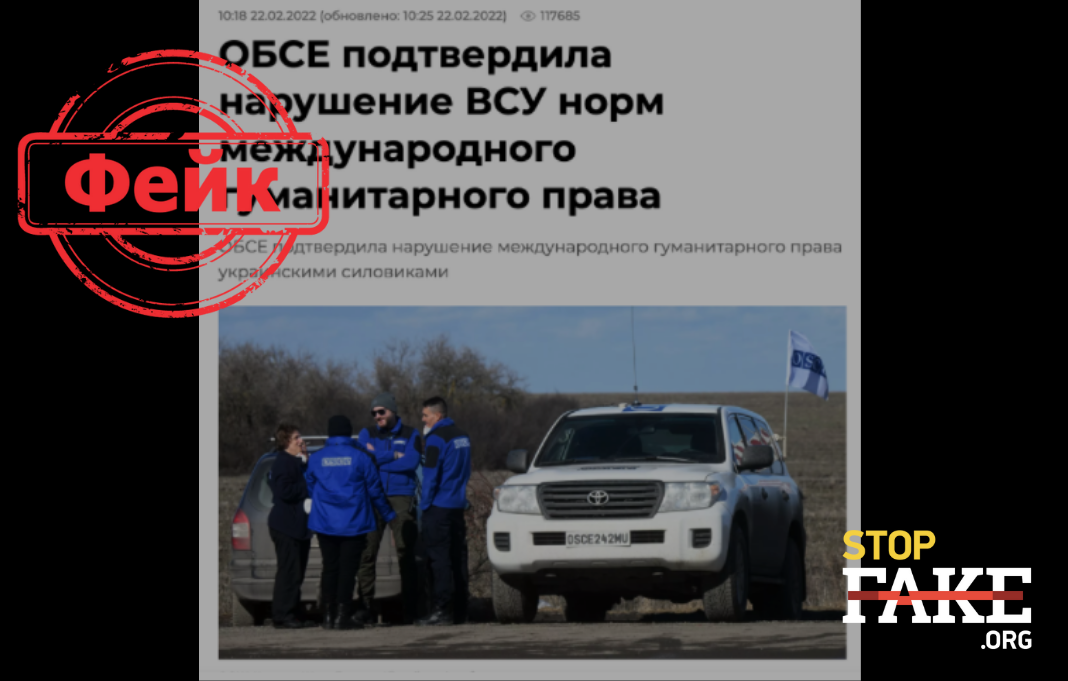 In the OSCE’s Daily Monitoring Mission reports there is absolutely no mention of Ukrainian servicemen violating any humanitarian laws.

On February 22 Russian propagandist media reported that the OSCE’s Ukraine Special Monitoring Mission confirmed that Ukraine’s military had violated international humanitarian laws. RIA Novosti was one of the first to disseminate this fake.

“In its February 22, 2022 report the OSCE confirmed that Ukrainian militants had violated the norms of international humanitarian law by damaging residential buildings and a butter factory while shelling the town of Mykolayivka with 122 mm rockets,” writes RIA Novosti.

However, RIA Novosti neither cites nor links to the actual OSCE report, but rather names the self-proclaimed Luhansk People’s Republic’s “National Militia’s” Telegram channel as its source.

The OSCE Ukraine Special Monitoring Mission does record shelling with 122 mm rockets around Mykolayivka in the Luhansk province on February 21. However, in the report there is absolutely no claim or even suggestion that it was the Ukrainian military that did the shelling, the report only mentions that the shelling came from the north.

The distance between the actual explosions and the line of contact between the Ukrainian military and the Russian backed separatists is some 4 kilometers, therefore it is impossible to ascertain that it was the exclusively the Ukrainian military who were doing the shooting. Furthermore, there is absolutely no mention in the February 21 report that Ukrainian forces had violated international humanitarian laws. Therefore, Russian media allegations that the OSCE had confirmed that Ukrainian soldiers had violated international humanitarian law is a complete fabrication.