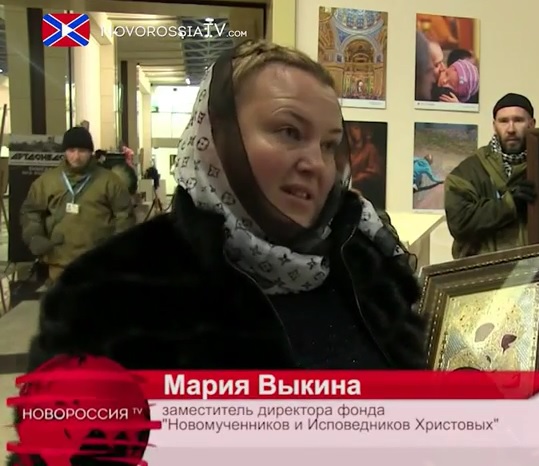 Information about a certain charitable foundation of New Martyrs and Confessors of Christ has been spreading on the territory of so-called Donetsk People Republic (DPR) for several months. It is said on the site of this foundation that it started as far back as in 1995. However, the site itself, pages in social networks and information about this foundation appeared only this year, precisely when a myth about “Donetsk and Luhansk People Republics” and “Novorossia” started to appear in Eastern Ukraine. According to records on the site, this foundation actively supports separatist movement on the east of Ukraine.

This foundation became famous when TV channel Novorossia showed a news item about icons exhibition, organized by the foundation. In this news item a certain Mariya Vykina was interviewed. She was introduced as a deputy director of the foundation. In looks this woman resembles a swindler Mariya Tsypko, famous in Ukraine and other countries. Stopfake.org wrote about her several times. She is a lawyer from Donetsk in this news item of Russian TV. A victim of Odesa tragedy in the other. Here she is an organizer of the “DPR” referendum in Moscow.

“Mariya Vykina” covered her head with a kerchief, which complicates defining total resemblance to Mariya Tsypko. Particularly, because her ears are hidden. However, the hair line, the form of her eyebrows, the color and form of her eyes, the shape of her mouth make possible to recognize Mariya Tsypko.

This exhibition is not the only public appearance of “Mariya Vykina”. She was also spotted on December 7 on Saur-Mohyla, where she laid a memorial capsule on the place of a future chapel. Here, for some reason, she introduced herself as Mariya Bavykina. Though, despite big dark glasses, it is obvious that this is the same person with Mariya Vykina (and Mariya Tsypko).

Besides, the voices Mariya Tsypko, Mariya Vykina and Mariya Bavykina are quite similar. It is highly likely that this is the same voice.

Let us recall that Mariya Tsypko is a famous swindler from Odesa, who got money from hundreds of people. She was raising funds for a pilgrimage to sacred places, bribes for school teachers, contributions for school parents’ committee and so on. No one of her promises, which she raised funds for, was fulfilled. At the moment she is on the wanted list.

Odesa 7th TV channel even made an investigational program about Mariya Tsypko.